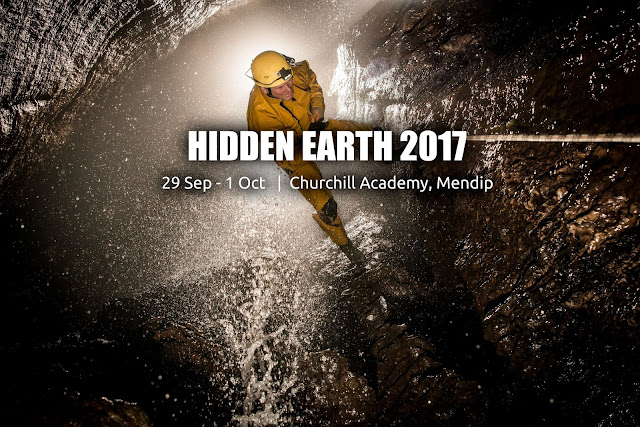 The weather wasn't first class, but the atmosphere and talks were. For those of you yet to visit it, Hidden Earth is an annual conference on caving. Whilst this might sound boring, it isn't in the least. The talks range from expedition reports, to regional round-ups and videos alongside a caver-run bar, stomp and a caving and SRT obstacle course. In short, it means you can cave around the world from your seat in the auditorium and gain a good idea of where you would like to visit. Fantastic! You also get to meet up with cavers from all over the UK. Hidden Earth is always ably organised by Les and Wendy Williams along with a whole host of helpers from Mendip and other caving clubs across the UK. The conference venue alternates between being in the North and the South. This year it was the turn of the South and Hidden Earth was in Churchill.

We camped on the sports field of the school. It is always interesting to wake up on Saturday morning in a sea of tents in Mendip and then head through a throng of people to listen to a talk on a distant corner of the world such as Mexico, Mulu, the Philippines, Meghalaya or Australia. It's great. I love it.
SWCC was particularly well-represented there this year. There were plenty of us attending to listen to talks and meet up with friends (nice to see Barbara and Alan at their first HE). But there were also many members with a more deep involvement who helped with the organisation, gave talks, or entered the competitions.
Jo White gave a talk on the Yorkshire Dales Cave Monitoring Project to an attentive audience.
We also had plenty of competition entrants. Arwen had 2 entries in the cartoon competition and received a merit for one of those.
Jess Burkey won the cartoon competition with her poster on the joys of being a cave model.

Jo entered the photo competition for the first time with several photos, including a portfolio of Dachstein ones. It was the photo of a delicate ice formation which won her the prize for best newcomer.﻿
And then there was the video salon which was co-ordinated by Andy and Antonia Freem. This year's winning entry was Keith Edwards' Opening AV presentation, which you can watch here:
Not forgetting Jo White's excellent performance in the SRT events in the SpeleoOlympics. Where she was the fastest lady on the SRT obstacle course and also earned the prize for the best woman in the SRT competitions. Well done everyone!

Thank you to all the Hidden Earth team who organised the event. Your efforts are greatly appreciated.

Don't forget to join us there next year!