It is a rare treat to be able to lead the Freems into a cave system they haven’t been in!

Meeting up on the Friday at the MCG hut, Mendips I found them huddled in front of the wood burner. With surprisingly little effort I managed to drag them away from the comfort of the fire for a customary pint at the Hunters!


Saturday was always going to be a short trip as Andy and Antonia had travelled to the Mendips primarily for a meeting at the Wessex CC about their involvement in supporting Eurospeleo.

I was to take them on the through trip of Fairy Cave to Hillier’s in Fairy Quarry. We parked at the Cerberus hut, changed then walked the 5 minutes to the quarry. A warning to those who have never visited the cave, the quarry is now fenced off and one needs to get a combination for the padlock on the gate to gain access. Fairy cave itself does not have a gate but Hillier’s does so the through trip can only be done in that direction if you do not have a key.

It had been cold that morning and we were surprised how warm the air felt as it poured out of the entrance, entering the cave felt positively tropical! 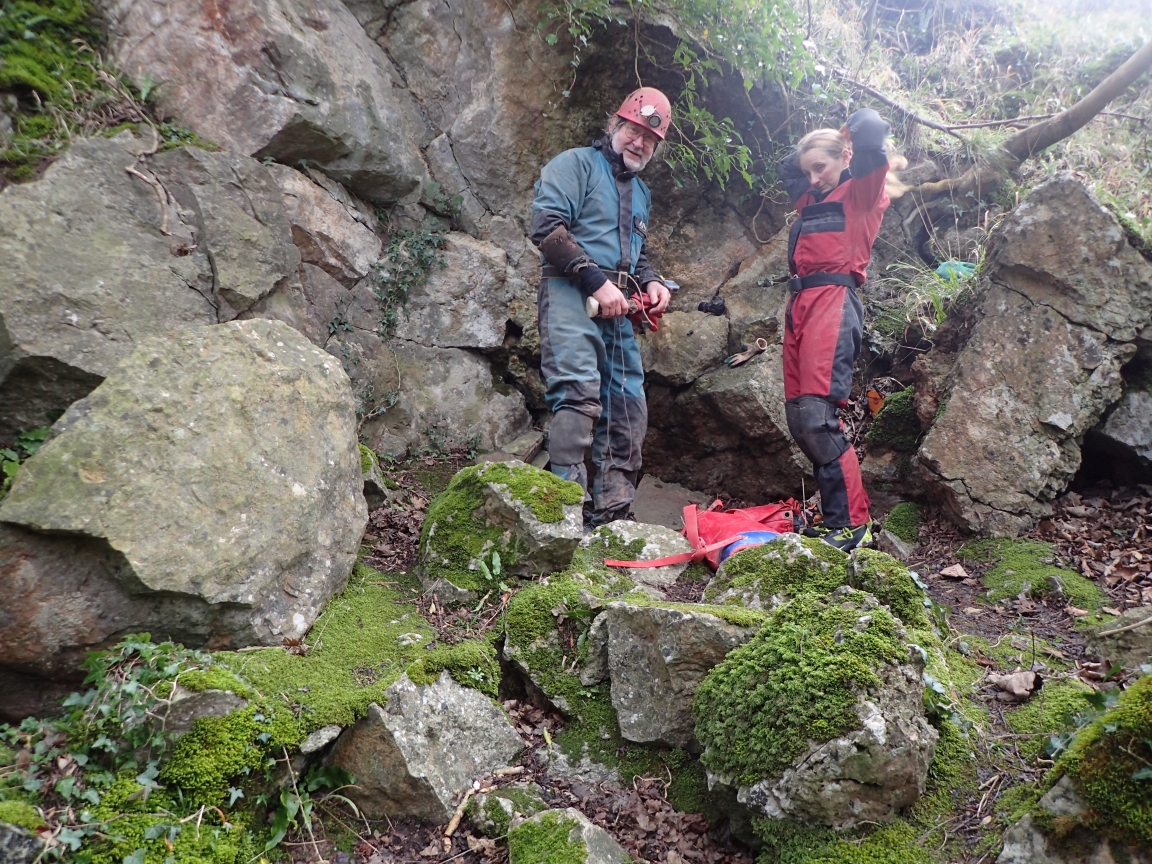 The beginning of the trip panned out as much as I had expected, not remembering any of it until I came across some squeeze for which I had a faint memory of. 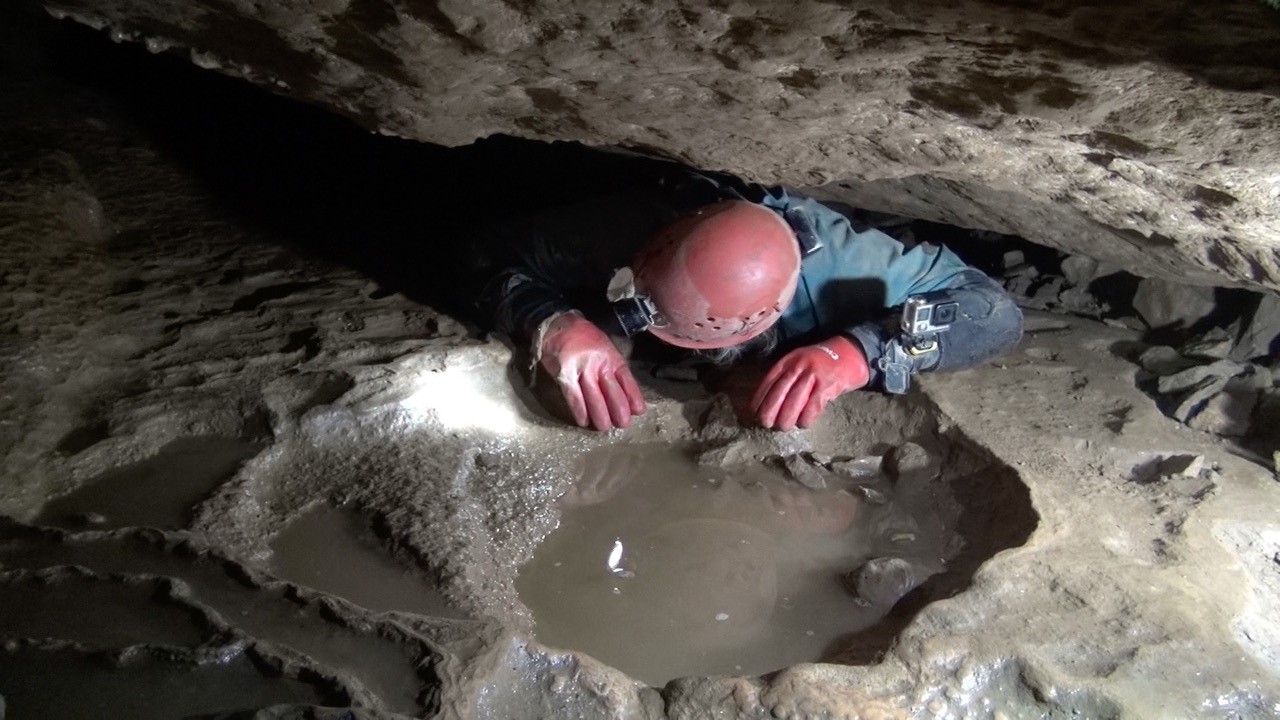 Andy passing through the first flat-out squeeze in Fairy Cave 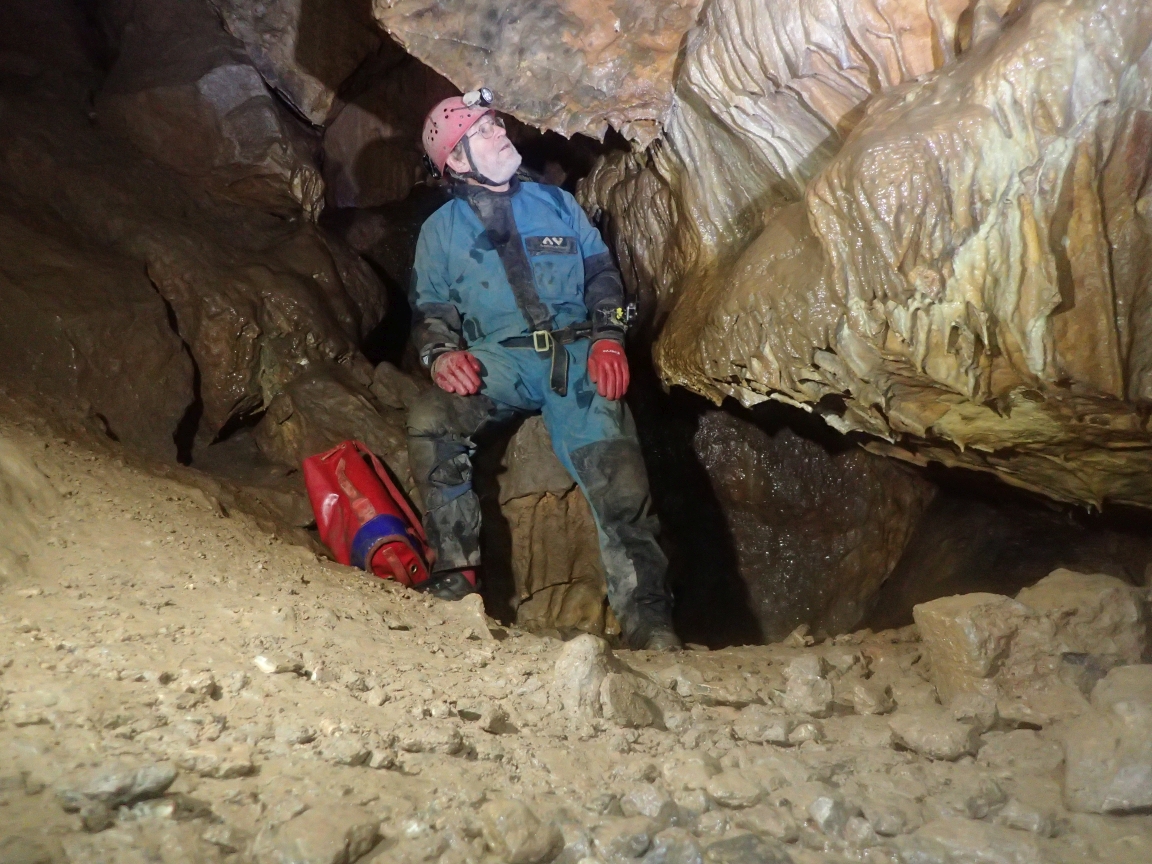 Andy in a chamber near the entrance 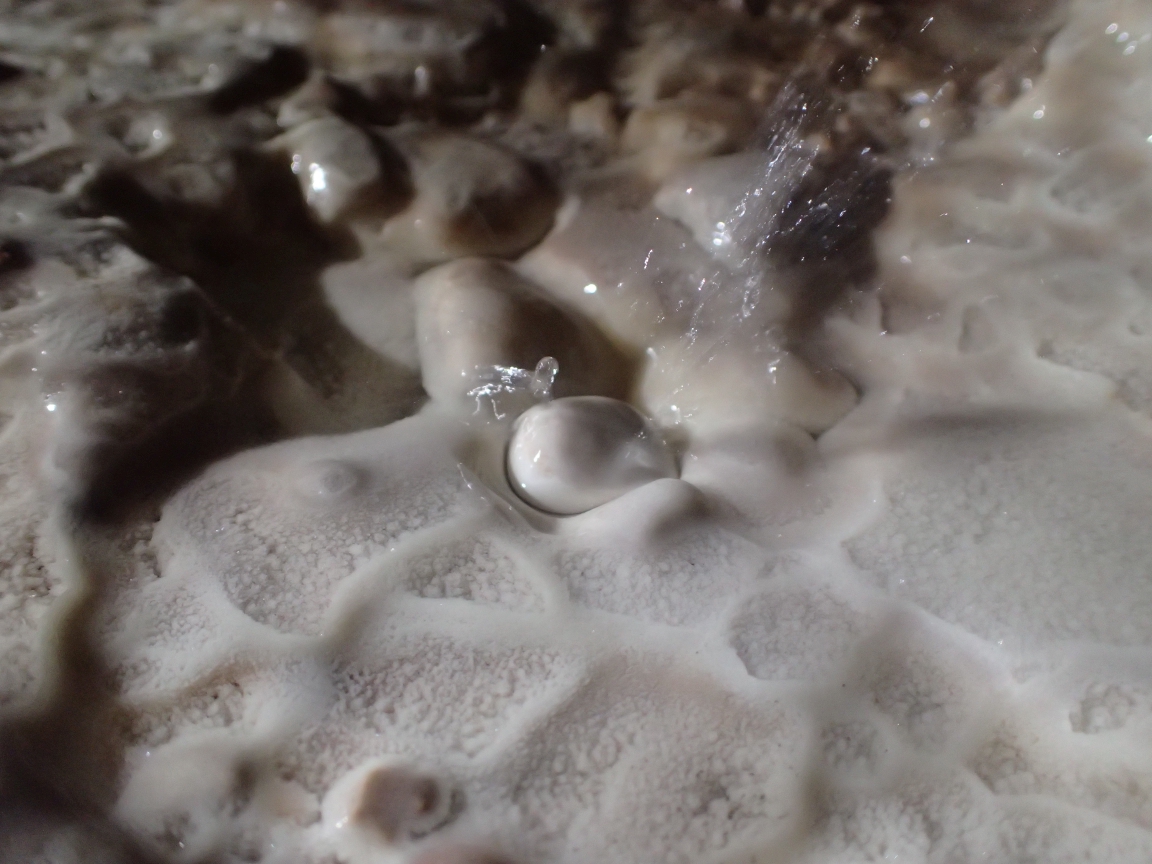 We stopped a few times to film and eventually came to a bouldery tube down to a duck. I don’t remember this! A flat out crawl into a pool with a few inches of air space, Andy surveyed it and was concerned that there was not enough space to maneuver as further on the ceiling forced you into even less air space. With valid concerns and recovering from a bad back he decided to go no further. New plans were hatched, Antonia and I were to continue and complete the through trip with minimal stopping, Andy was to navigate his way back out and find the entrance to Hillier’s and meet us there.

The duck was grim and I had to put half my face into the pool to get through; that turned out to be the easy bit, it was the tight squeeze immediately after that was “interesting”. 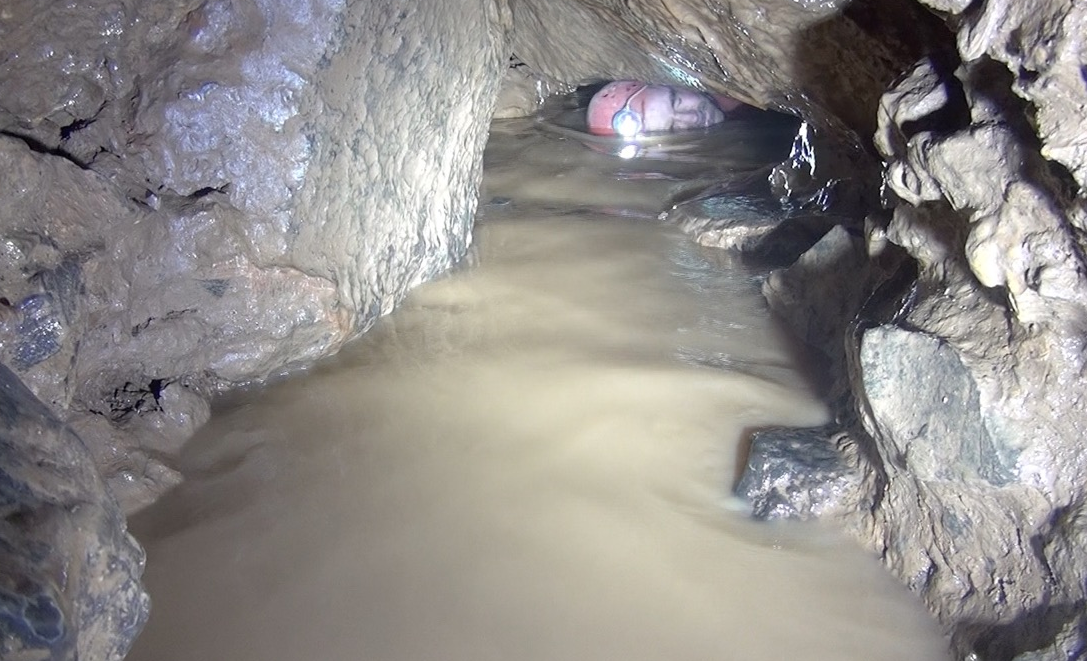 A lovely day to go for a dip!

With the duck and squeeze behind us we continued on with the trip doing the odd bit of filming. We eventually met the Hillier’s system at a T-junction which is an easy climb down. Heading left towards the exit the cave is noticeably more decorated with impressive flowstone formations. At some point along you pass through tar hall. Black shiny tar oozes out of the roof from past quarrying activities, like some grotesque alien life-form. 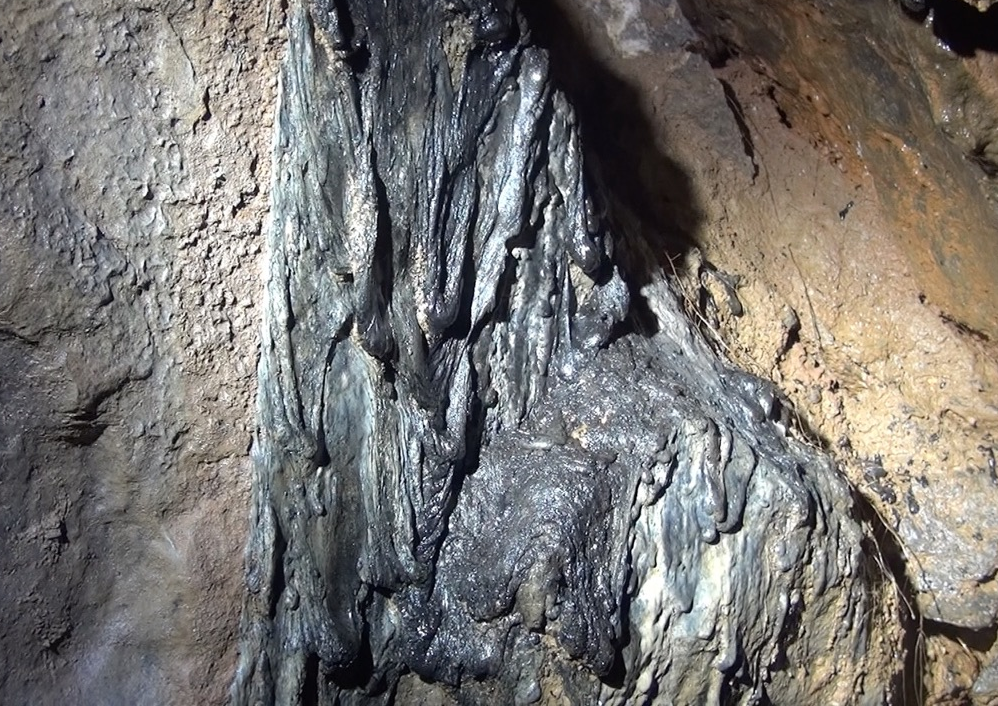 Tar oozing out of roof in Tar Hall chamber

After this is a section of passage with many broken formations caused by quarrying activities. Another flat out crawl, then you can finally stand with a climb up a slope to the exit.

Andy had been waiting patiently to greet us. It had obviously occurred to him that he could come through that entrance and we were keen to show him the rest of the cave. We headed back towards the T-junction filming various locations. 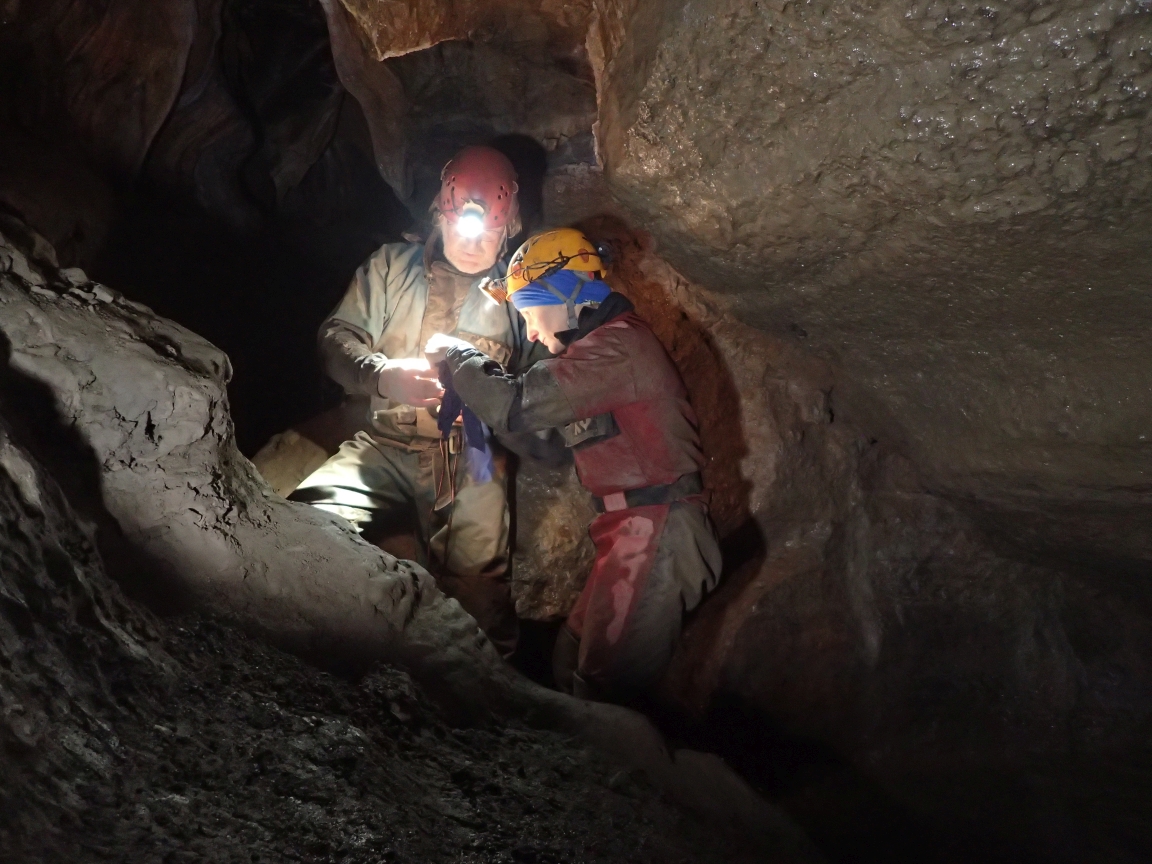 Once we got to the T-junction I said I had never actually gone right, I had always gone left to head out, so we went right! This turned to be a fantastic experience as the formations suddenly got even better with an explosion of coloured flowstone, crystal pools, straws, stalagmites and curtains, a Freem production filming wonderland!

Antonia and I pushed a contorting but easy to navigate choke, passing through a flowstone flat out crawl and with Antonia leading the way entered the section of the cave into what is known as Cambridge Grotto. This is very well decorated and we passed through to as far as Brenda’s Chamber. Andy had not followed through the choke, so after about 30 minutes of exploring we headed back to join up with Andy. At this point we headed out.

In the evening, we ate at the Victoria Inn at Priddy, then went to the Wessex for their meeting. I hung around in the common room chatting with others and then about 9pm the meeting finished and we all headed off to the Hunters.


Plan “A” was to visit Pine Tree Pot, a cave near MCG which neither of us had visited. This was blown out by the fact no one staying at the MCG had access to the key cupboard. So rather frustrated we went to plan “B”, use a key we had picked up at the Wessex the night before and enter Hillier’s again with one of the Freem’s superior cameras to film some of the formations in higher quality.

We picked up two new MCG members who had been let down by other members and took them into Hillier’s. The cave is quite short so I took them as far as the T-junction into Fairy Cave, explained various options and left them to it. Andy and Antonia had made their way to just past tar hall and we began filming. We were working our way towards the pretties beyond the T-junction. 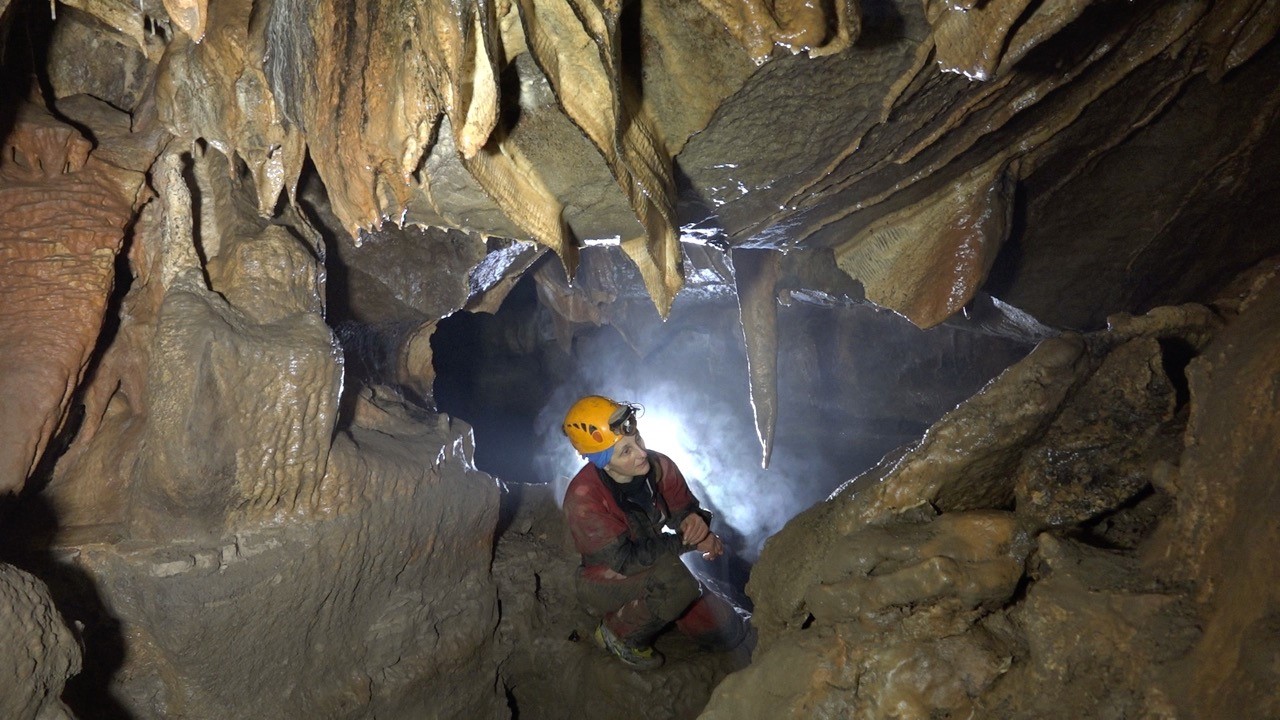 Antonia admiring a formation during filming

Filming took longer as the superior camera required setting up on a tripod, this gave me ample opportunity to use my stills camera for capturing various formations or scenes including bat poo! Yeah it gets very lonely on long filming trips… 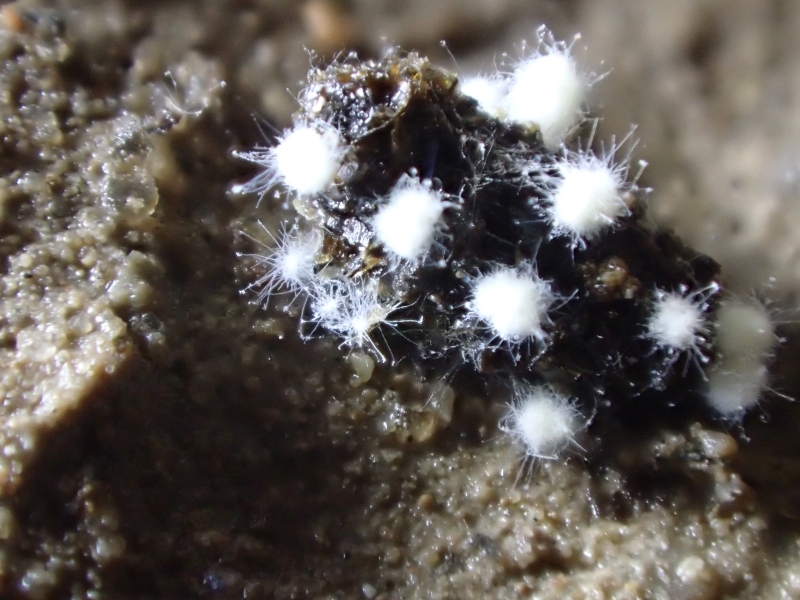 With an almost celebrity like status Andy and Antonia were recognised by another group passing through the system. I on the other hand was not...

We eventually passed the T-junction into the next pretty section, filming the squeezes and formations. This time Andy joined us and passed through the choke into the flat out crawling section. At the end of this is another squeeze that turns into an awkward left-handed turn. Andy observed me passing through this and most wisely decided against continuing in case his back gave him trouble. Thus Antonia and I continued on, filming as much as we could do. 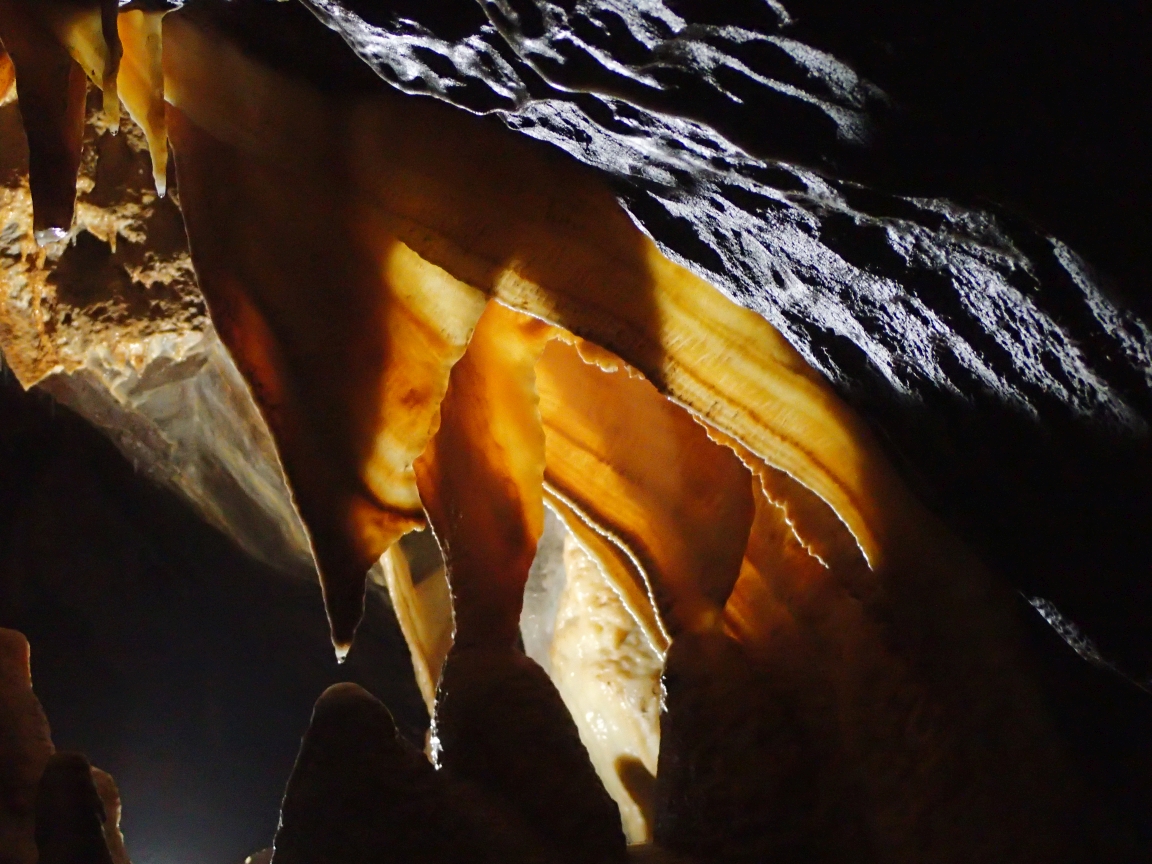 Close up of curtains in Cambridge Grotto

I realised just having 2 people meant that it was more difficult to set up scenes. A third person in a filming team definitely makes things easier and can act as a model for scale.

With time running out, regretfully Antonia and I had to give up and head back to the exit to ensure we did not overshoot our call out. There was plenty more to video…

Meeting up with Andy we shut the gate and headed back to Cerberus, just in time for it to start raining. Sitting in their camper van, scoffing pasties and chocolate, bruised and battered from the choke we were all very impressed with the many formations that Hillier’s had kept secret. 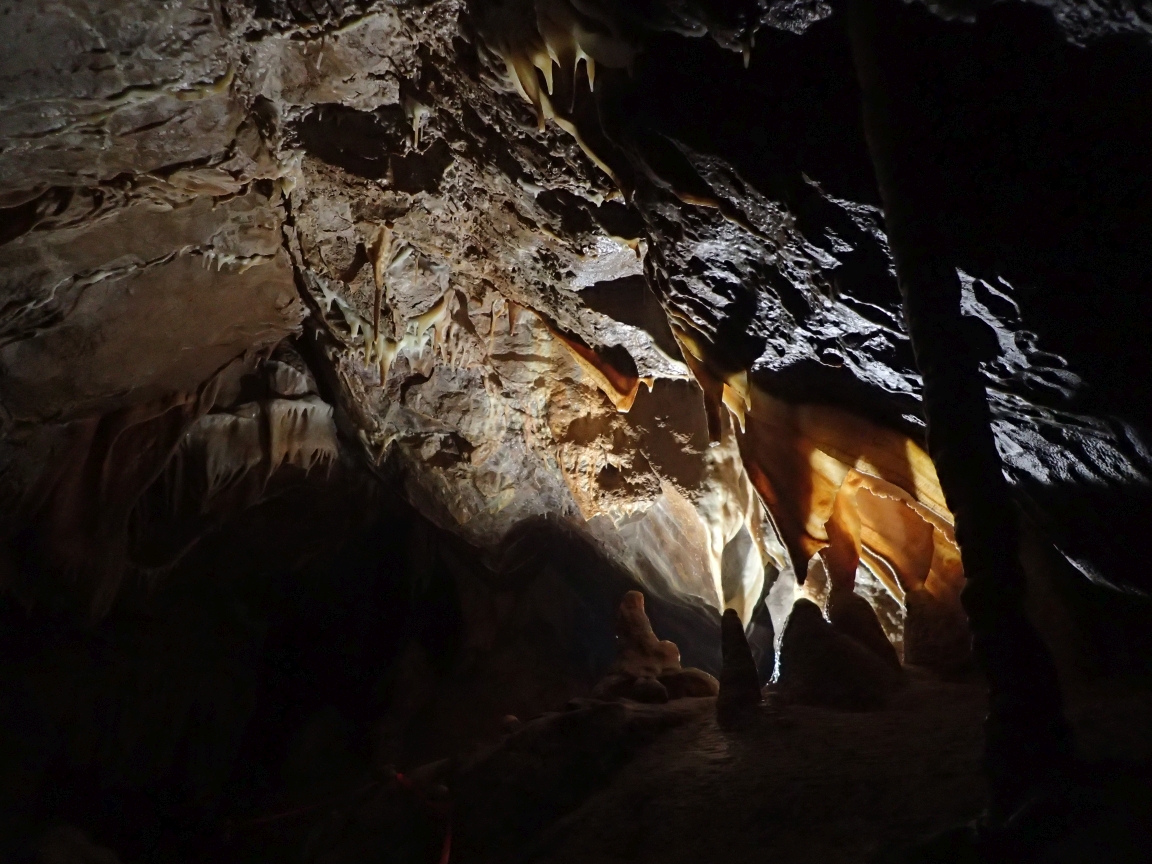 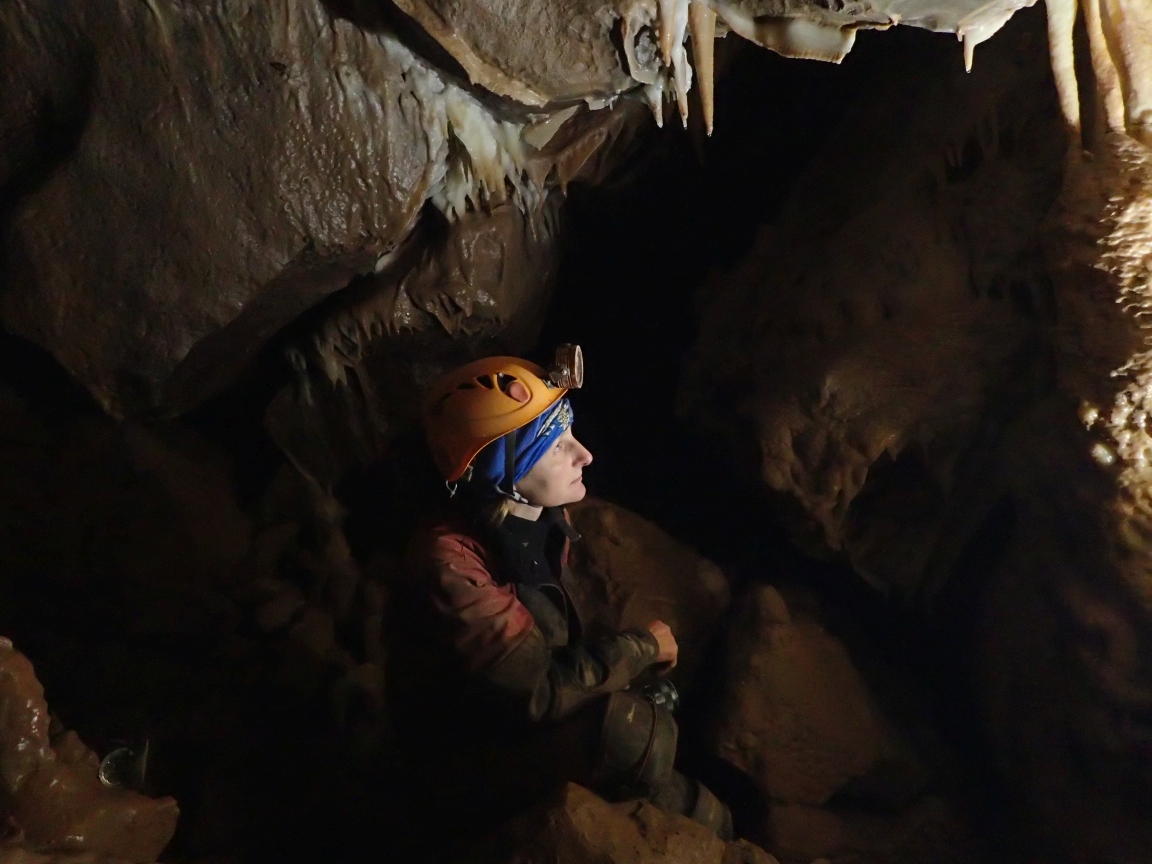 Beyond Cambridge Grotto, Antonia pauses to admire the formations she had just filmed

Now you have read the blog you can watch the movie!

Posted by Hornbydd No comments:

It's not every weekend that you get the chance to visit the highest point in Wales one day and then walk around one of the lowest spots the next. But that is precisely what we did at the beginning of March when we visited North Wales. The Saturday was spent walking up Snowdon - which was still largely in Winter conditions. We walked up a fairly lively Watkin Path and down the Rhyd Ddu path, which was virtually deserted as we only saw 2 other people on the way down. Total time door to door of the YHA at Llyn Gwynant was 6 hours. Sunday then saw us have a great time on the GoBelow adventure course in Cwmorthin slate mine with a 4 hour underground adventure including zipwires and a 70 foot 'leap of faith'. All in all, it was an excellent fun-filled weekend.