A Coffee Break In Ogof Marros

It had been a long wet winter and as the entrance series can flood to the roof we had been hampered from visiting the newly discovered Ogof Marros.

I had first met Phil Knight a few years ago when he joined the SWCC where on one of our regular jaunts in to OFD he decided to join us and not long after this Brendan had enlisted his help locating and exploring the caves of Carmarthenshire.

It was during one of these visits to that Phil first mentioned about his passion for a particular dig area near Greenbridge and 2 years later we were back with him to take photo's of his pride and joy.

I should mention a few other names at this point as over the summer of 2015 Phil was joined by a full team of dedicated diggers including: Fred Cook, Emily Ivens, Storm Morris, Ashley Pursglove, Antonia Freem, Andy Freem, Claire Vivian, Duncan Hornby and Michael Perryman.

Brendan, Myself, Jess and Mags arrived at the SWCC on the Friday night to ensure we would get a descent start the following day. The SWCC is about a 2 1/2hr journey for us and Pendine a further hour and half.

We arrived in Greenbridge to a fine sunny day and met with Phil, Andy & a handful of others for a full tour of the surrounding area and before heading to the entrance.

Above a rather gloopy sink we entered a hands and knees crawl and were soon making our way down a 4m climb. At this point Andy asked Phil if he was planning on going ahead 'just incase'........'Just incase' turned out to be for my benefit as our first obstacle would be a letterbox squeeze in to the cave named 'Freds Despair', fortunately this turned out to be more awkward than tight and didn't stop my journey in to the newly discovered 300m of cave.

We then made our way through stooping passage to '3 Man Chamber' and on through boulder choke to emerge over the top of the original way in to the cave to emerge at 'Wildest Dreams Stream Way.' Here I stuck my head in to the original crawl which looked pretty dire with bits of scaffold and wooden blocks holding the boulder choke above you at bay. Andy cheerfully pointed out that the grovel through hanging death was normally accompanied by a thorough soaking as you made your way through the flat out crawls and that more than once boulders had moved and only luck had intervened to stop more than one of the diggers being badly injured. I was grateful the alternative route had been found a couple of weeks earlier which now meant that the route in to the cave was accessible in all but the wettest conditions.
After a brief look in to 'Crystal Carpet Chamber' , we made our way in to the Main Stream Way where Phil proudly showed us his Barista skills before heading off to dig with the others whilst Andy took us on a tour of the rest if cave. On we went through a loop route past Jimmy the trout, who was hiding in a static pool, to take in the rest of the passage way. Back in Stream Way we headed toward through a couple of crawls to start taking some photo's of the '3 Tier Rifts', whilst Andy re-joined the diggers.  Brendan and I snapped away happily whilst our models got colder and colder.
Mags has only been on a couple of trips with us and leaned over to Jess on the first shot of the day and asked her if Brendan and I aways took our cameras with us.... 'Oh yes', Jess smirked. As we continued to take snaps we heard what sounded like formations being broken and left our cameras to find out what had happened. As we emerged over boulders a strong smell of coffee rose from the stream and it turned out that one of the digging crew had had an unfortunate incident with the jar!

As there was no further coffee to be had our models both revolted and insisted we exit in time for ice-cream & cake at the nearby beaches in Pendine......Well who was I to argue!

SWCC - Looking to the future

What better way to follow on from the 70th anniversary celebrations than to look to the next 70?
There were several trips underground with the club's next generation over the anniversary weekend and this is the story of one of them.
The plan developed in a rush of alcohol fueled good intentions on Saturday night; faded in a morning of slightly delicate heads, drizzle and vandalism the rose from the ashes, full of black pudding fueled energy.

The plan on Saturday night was quite straight forward. A group of SWCC Kids who have proved themselves competent undergound were pushing for a new challenge. Lisa's suggestion was a CwmDwr - OFD 1 through trip but there was a forecast for heavy rain so we decided that an exploratory trip in Cwm Dwr would fit the bill just as nicely. None of the kids had ever been in so it really would be something new. 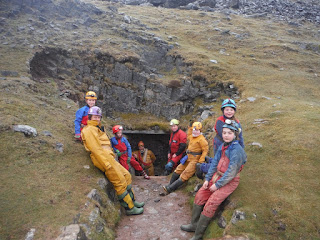 That plan died when no amount of persuasion would open the lock on the Cwm Dwr gate so, after a quick debate we decided to head up the hill to Top Entrance with no real plan other than to find the kids a new challenge.

As the group set off up the hill, James and I ran back to change the ticket to reflect the new plan and caught them up on the hill.

Not even the traditional Penwyllt Drizzle could dampen the kids spirits. They don't get to cave together all that often and they were really looking forward to it. 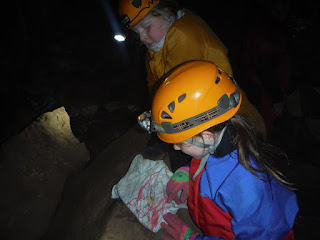 Looking forward to it so much that trying to get them all still enough for a photo at the same time was somewhat of a challenge!


Once in the cave, we got down to the serious business of planning where to go. Try to show kids a route on a normal map map and you've got no chance. However, point out to them that they're wearing surveys and it changes the game altogether. 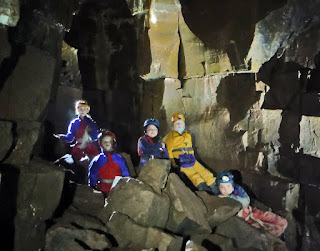 The beginnings of a plan were there. We'd head down through the White Arch series towards Gnome and aim for Shatter Pillar. There were a few photo stops and detours on the way - interesting looking side passages beckon in all sorts of directions - but we made our way down until an inviting looking hole in the floor changed the plan again. We headed on down following Pete and Arwen down a shortcut that lead all the way to the bottom of Gnome, popping out just before the terminal choke. Not only had the kids not done it before, it was new to me and Mave too. There's a couple of spots where short legs are a definite disadvantage but with a hastily rigged traverse line and a few spotters everyone was lead through safely.

Now the plan really got interesting. We could still head towards Shatter but, from here, the most direct route would be Edward's Shortcut. We had enough rope and hardware to protect it and it certainly fitted the description of the trip the kids had asked for - somewhere they hadn't been before with a bit of a challenge. 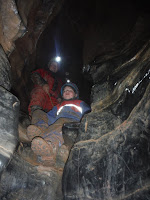 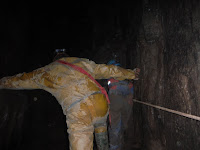 Of course, the traverse isn't the only difficult bit of the shortcut if you're 8 years old and 4 feet tall, but these kids have grown up negotiating Bunk Traverses in married and the Kershaw Terrace Treehouse. The acquired skills (and a bit of mild peer pressure) saw even the youngest negotiating the route with relative ease before heading out to the shiny new ladder at the Elephant Trap and on to Shatter Pillar. 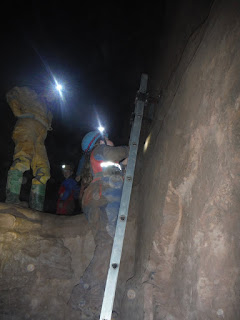 A short photo stop (paid for in the standard currency of Kids caving, Jaffa Cakes and Mars Bars) and we're on our way through the spectacular Selenite Tunnel to Presidents leap. At this point, I left them to it for a while. I'd very carefully re-hydrated myself after the previous evenings entertainment and was now in rather urgent need of finding some running water! 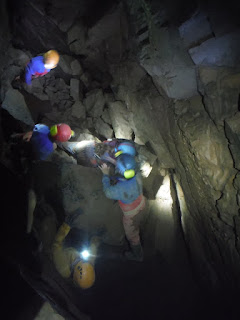 Matters dealt with, I headed back to meet the party but tucked myself up high in the passage to stay out of sight.
The other guys were de-rigging the protection on Presidents Leap and knew I wasn't far ahead so the kids had been allowed to make their own way to me.
There's a spread of over 3 years between this particular bunch. Not a huge gap in adult ages, but a massive difference at this age - it's a third of their life!
Adults scramble around this part of the cave without thinking much about it but, at 4'3" some of those boulders are quite intimidating. It's quite something to see a group of kids with no direct supervision working together to make sure everyone gets through safely. Without any prompting or outside instruction, they were instinctively moving at the speed of the slowest, approaching each obstacle as a group and moving on to the next - working as a team, spotting, coaxing and supporting each other through each challenge.

By now we're approaching 4 hours underground - a proper serious trip for the youngest in the party who are starting to flag so the last of the chocolates are handed around before we head on to the last of the challenges - the traverses in Salubrious. Lisa's soft side starts to show and she offers a piggy back to those whose boots aren't tall enough to deal with the stream. The threat of cold, wet, feet has been averted and it's all smiles again.

We climb up from the stream, negotiating the Corkscrew with no problems. Funny, before the trip, this is the one thing the kids were worried about but, approaching it this way after all the challenges they've conquered to get here, it doesn't seem quite so daunting.

Now we're back on familiar territory, the kids are put back in charge of navigation and they lead us out, through the Brickyard to daylight. 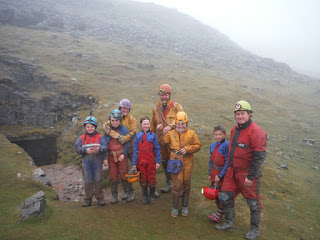 The predicted heavy rain hasn't materialised so it's a not too unpleasant light drizzle that awaits us.
The obligatory apres-cave shot and we're off down the hill to a well deserved late lunch.

We've been out for nearly 5 hours and 4 of those have been underground. Not a bad trip by anyone's standards but a marathon at this age. Not only can the kids be rightly proud of their achievements, SWCC can be confident that the future is looking good.
As the adults were mostly tied up with meetings and/or hangovers there were probably as many under 15's at the weekend as there were over!
Here's to the next 70 years!
Posted by Piers No comments: