How to have Mendip caves [almost] all to yourself?

The answer to this question seems simply to turn up on an Easter Bank Holiday weekend! Swildon’s is Mendips most popular sporting caving trip which usually has bus loads of University students pouring in and yet we were the only people in it! Goatchurch the most popular cave on the Mendips, and we saw only one other group and GB cave completely empty apart from a frog. The BEC “get everywhere” - I think not! ;)

We had all arrived at the Shepton Mallet Caving Club hut on the Friday. Bill had settled in for the night in front of the fire with a bottle of wine whilst the rest of us played around in what must be the world’s first ‘coffee table cave’ then went to the Hunters to plan out Saturday's trip. 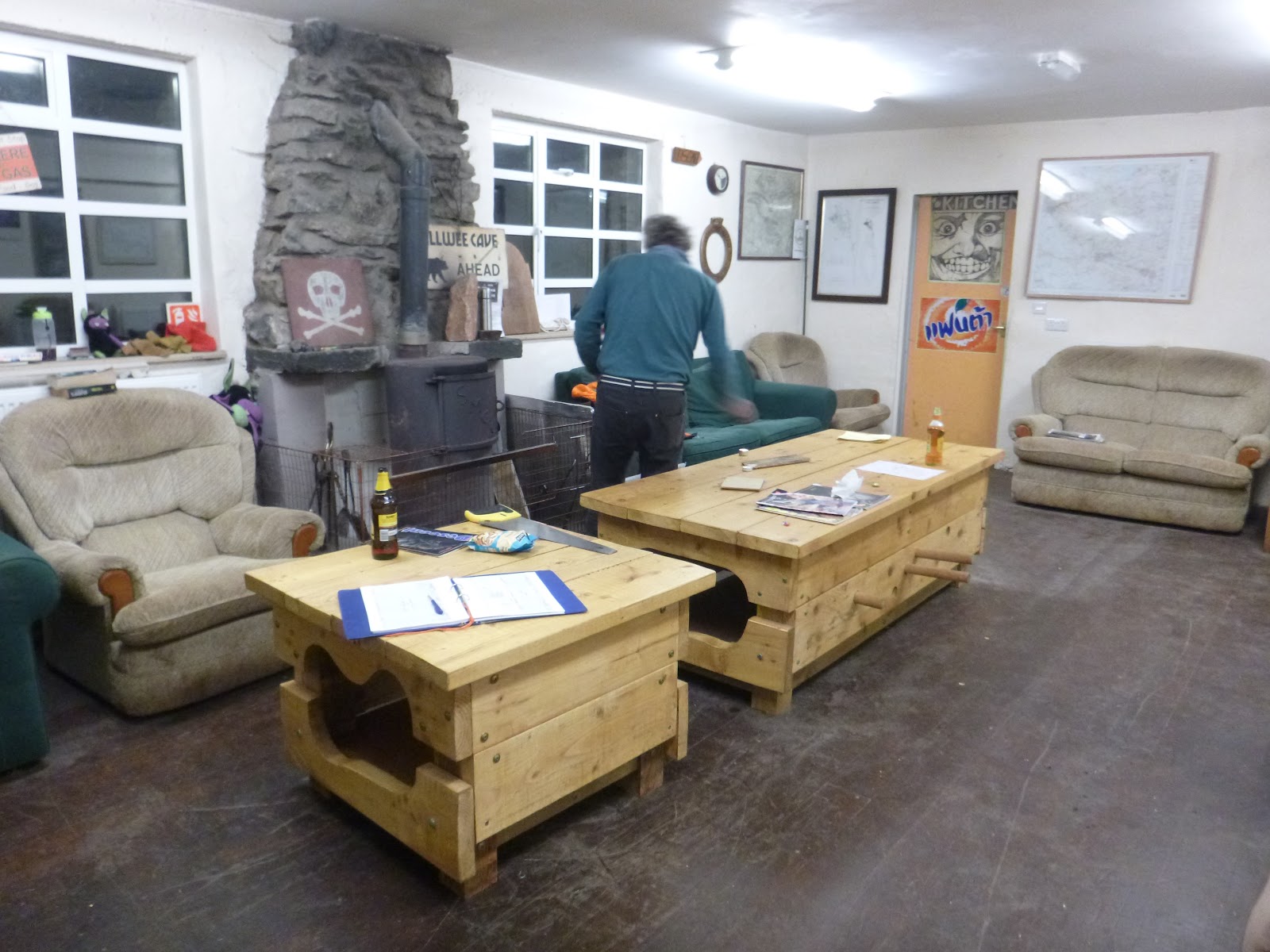 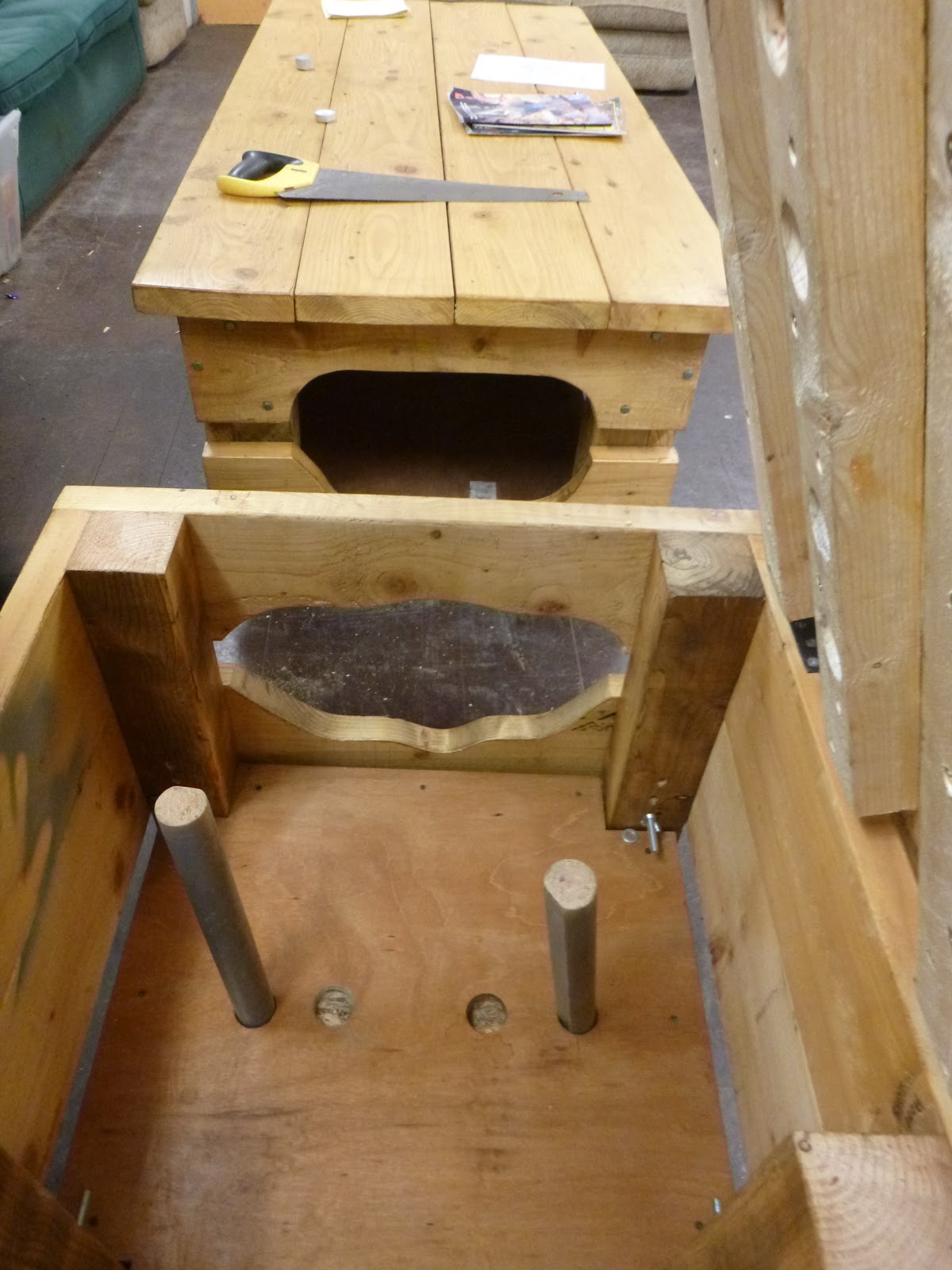 The two brilliant cave/tables in the Shepton Common Room. Complete with moveable ‘stal’ to make squeezing through more awkward! Having something similar to these in the Long Common Room at SWCC would liven up those long evenings... 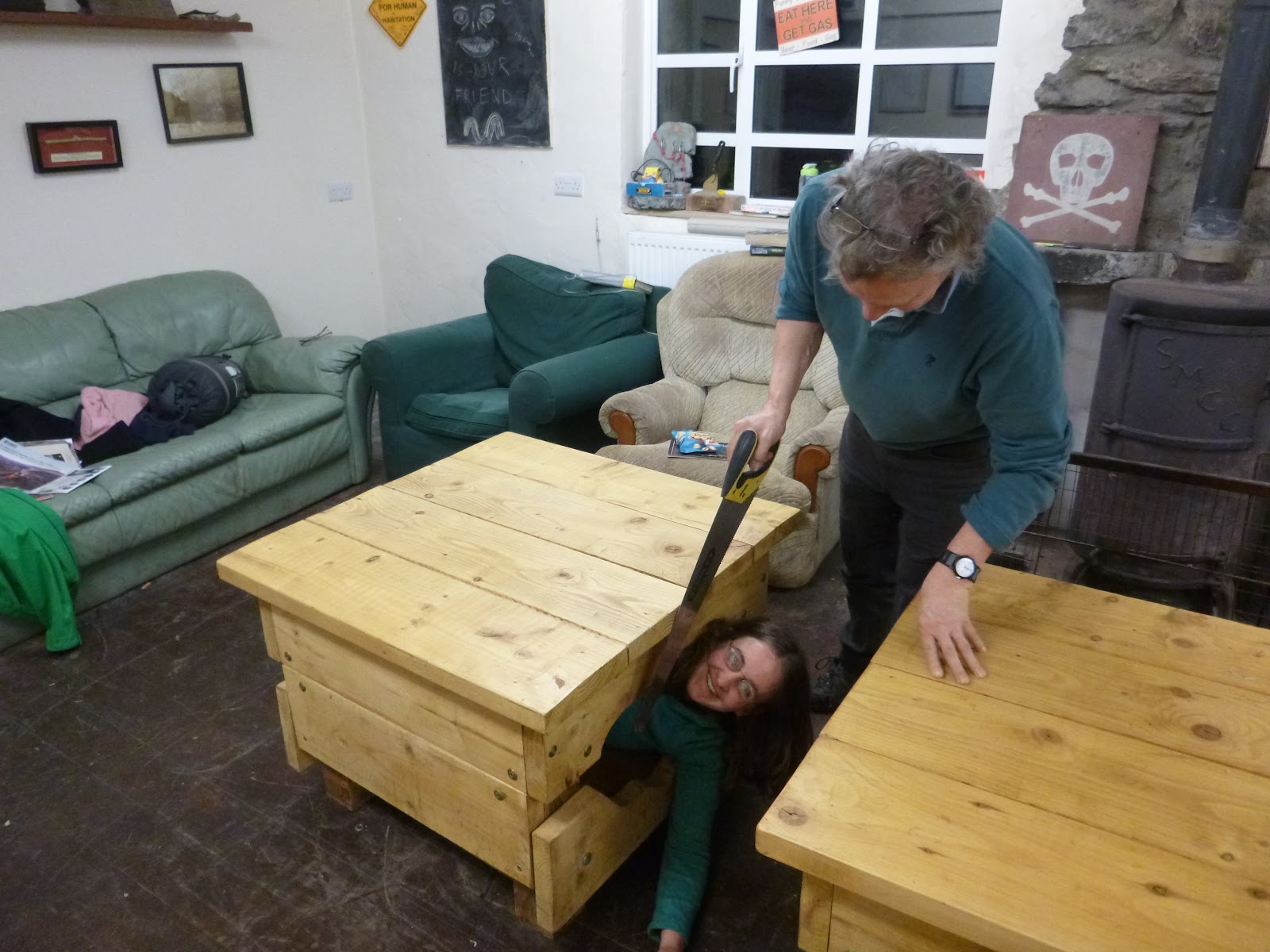 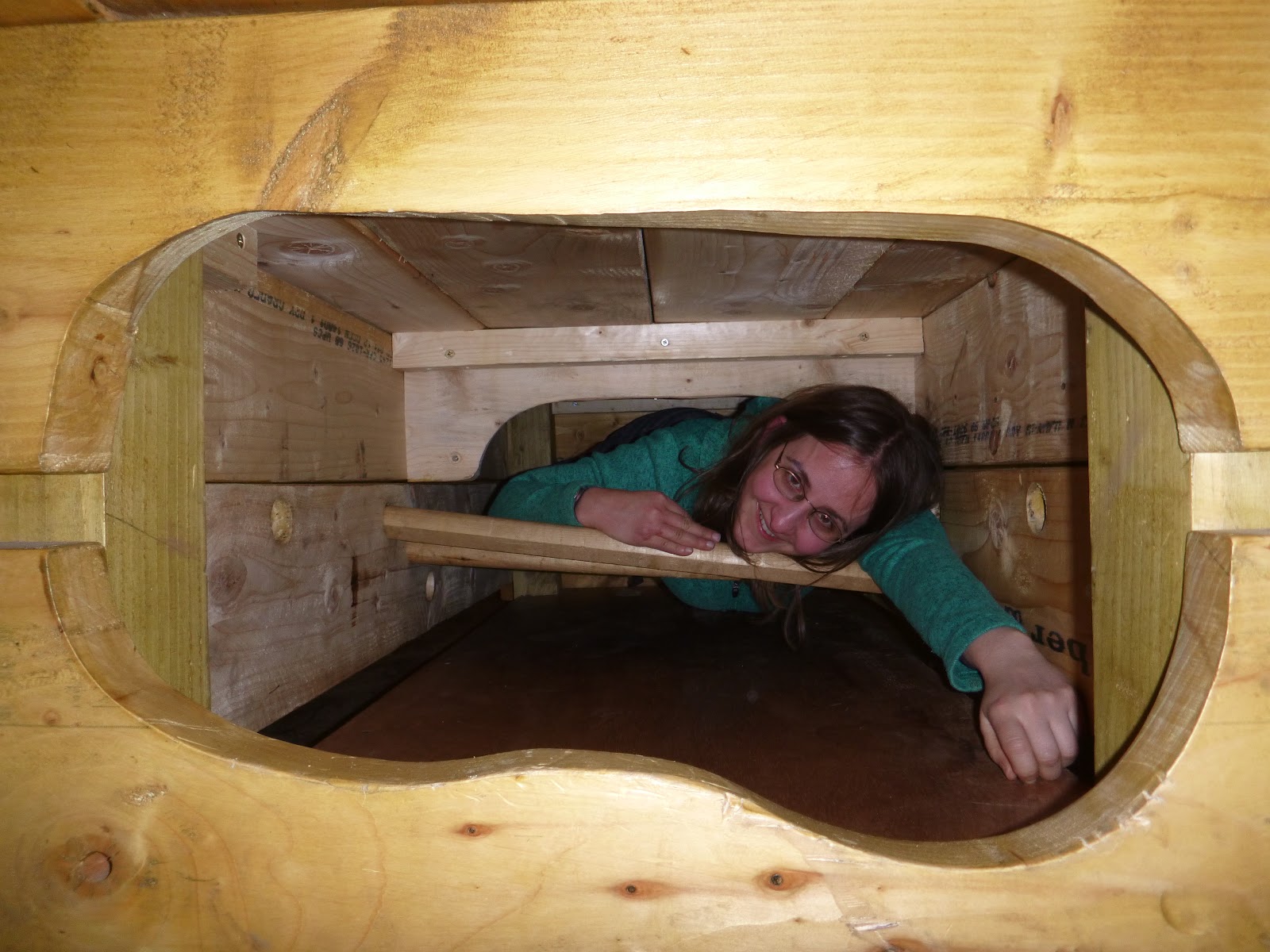 More fun with the coffee table cave. Claire squeezing past some ‘stal’.

On the Saturday Bill declined the trip as he had a dodgy knee and was was unsure if climbing the ladder would have been a sensible idea as all of us were intending to go beyond the ladder pitch.

With bad weather forecasted for the entire weekend it was surprising to see the stream so low when we got to the entrance. This was Brendan's first trip into Swildons but for veteran cavers Colin and Malcolm it was a return trip but quite a few years had elapsed since they had last visited it. At Tratmans Temple Claire and I peeled off as we were going to do the Short Round Trip, the others headed for Sump One. 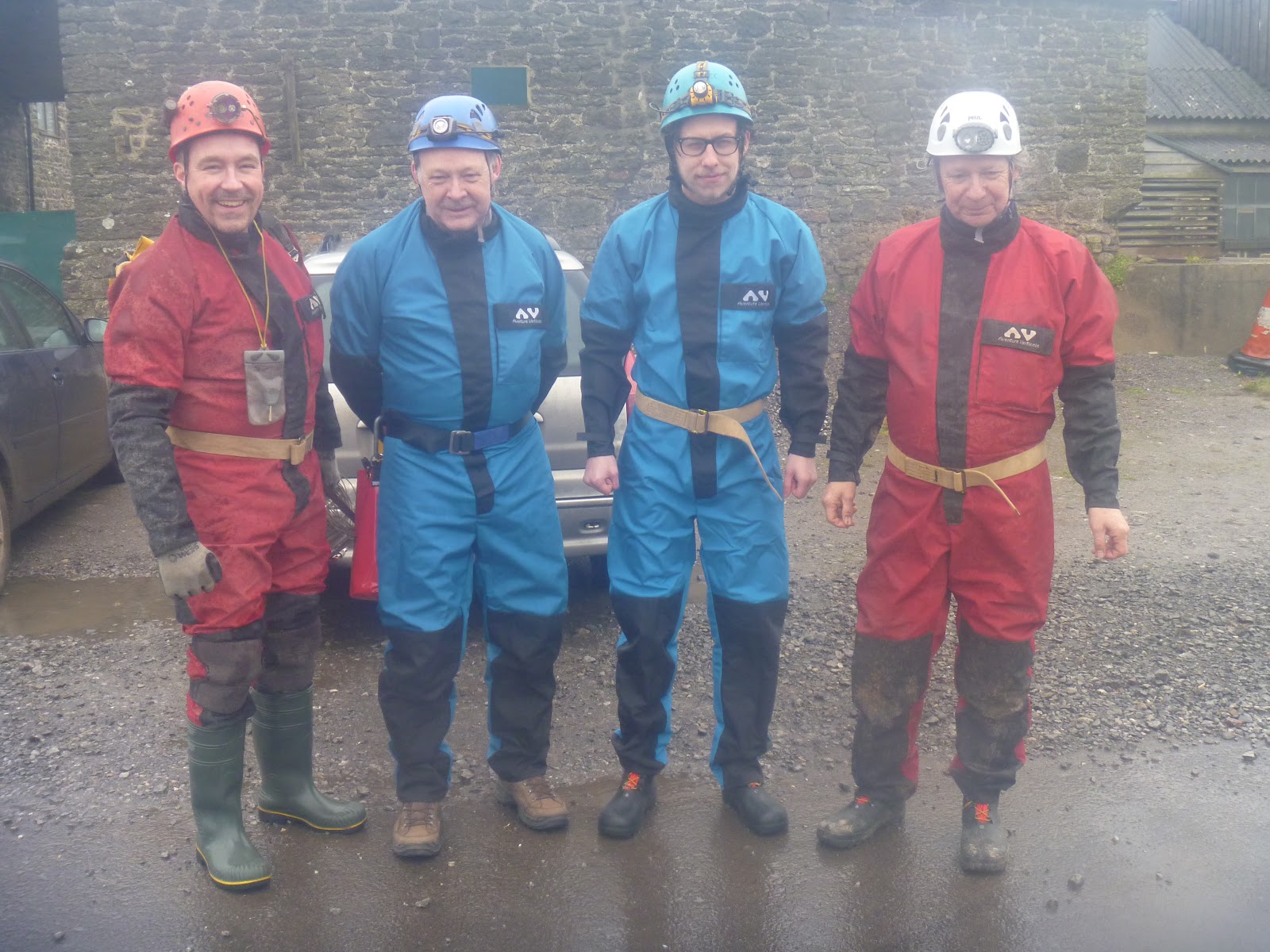 Duncan, Malcolm, Brendan and Colin - complete with matching over suits!

Our short round trip was an “interesting” one. We ventured as far as some horrible drop over nothing in Blue Pencil Passage. I was hoping to actually get into the streamway but we decided to turn around. This was fortuitous as the ducks further on in the trip required a lot of work to open up. The second of the “double troubles” really was a couple of inches of airspace (after we had bailed for ages). It’s a horrible experience with waves of water going over your face and up your nose and no space to move in… A third duck Claire desperately bailed as much water as she could into a dam that was leaking back into the duck, I tried to start a siphon working, sucking foul air and muddy water out of tube that would have helped empty the water behind the dam. Realising that the siphon was not going to work and the dam leaking back into the duck I took a quick look at air space that had opened up and went for it.

The rest of trip was a lot less stressful with us having a short detour into the Black Hole Series. Sump One was very low and a lot easier than those ducks!

That evening everyone looked suitably knackered and we ate at the Queen Vic pub. For the record you can get a “proper” pie for a meal which made Colin very happy. 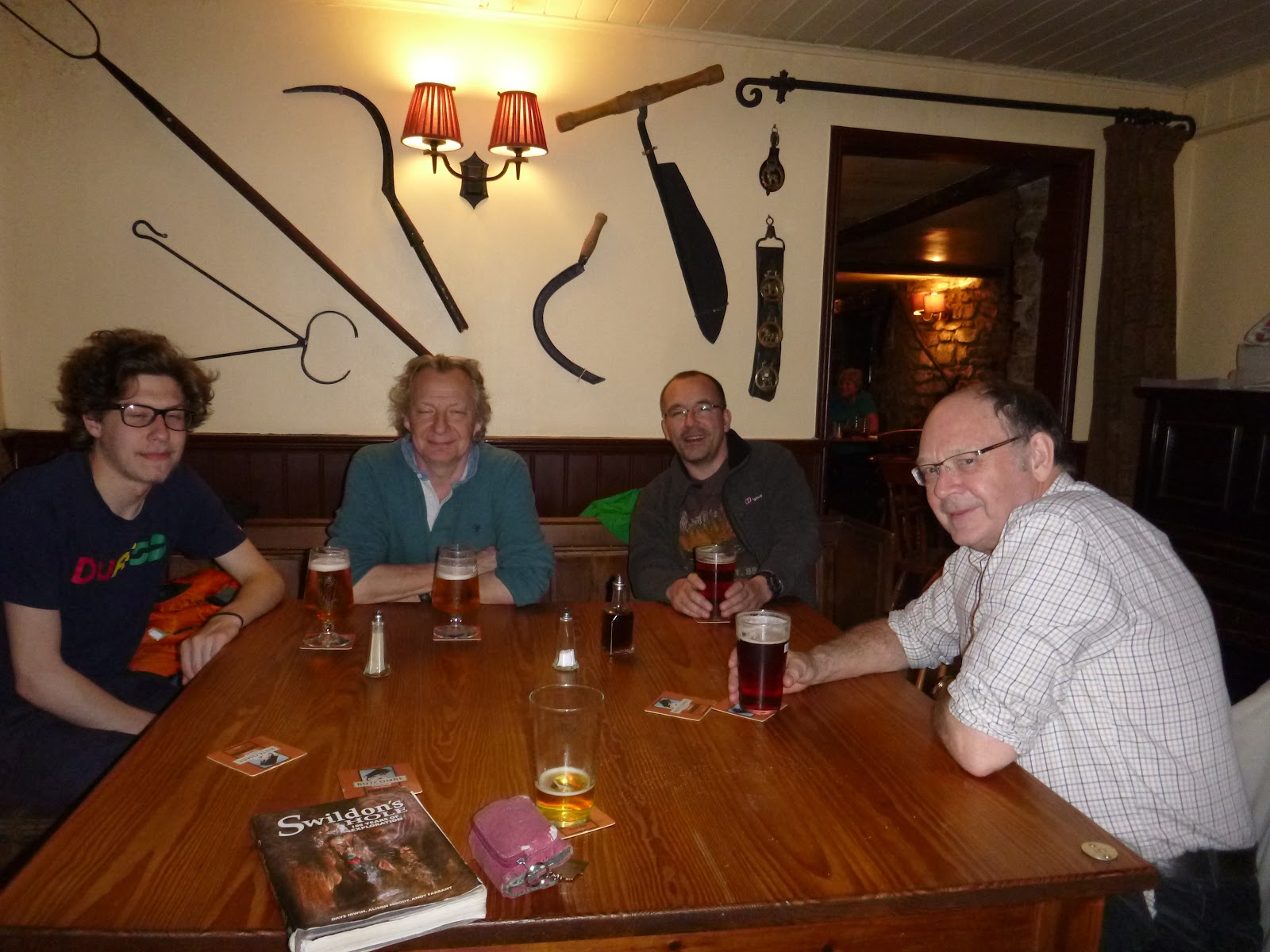 Brendan, Colin, Duncan and Malcolm at the Queen Vic.

Sunday was a Mendip first. I had heard through the RSS feed on the CSCC website that a new cave in Burrington Combe had been discovered and was now accessible with a leader. I have personally caved in Burrington Combe many times but have never heard of the cave called Tween Twins Hole. You can book yourself onto trips and find out more about this cave at the official website here.

Jonathan Williams was to be the leader and met us at the Club hut. After a bit of faffing we went and agreed to meet the others in about an hour. It is currently a short trip of about 1 hour and only 3 people + leader are allowed in it at any one time.

The entrance is muddy, has a short ladder climb and after this you get to a chamber where you have to remove your oversuit and clean your boots to avoid dragging mud onto the pristine formations. 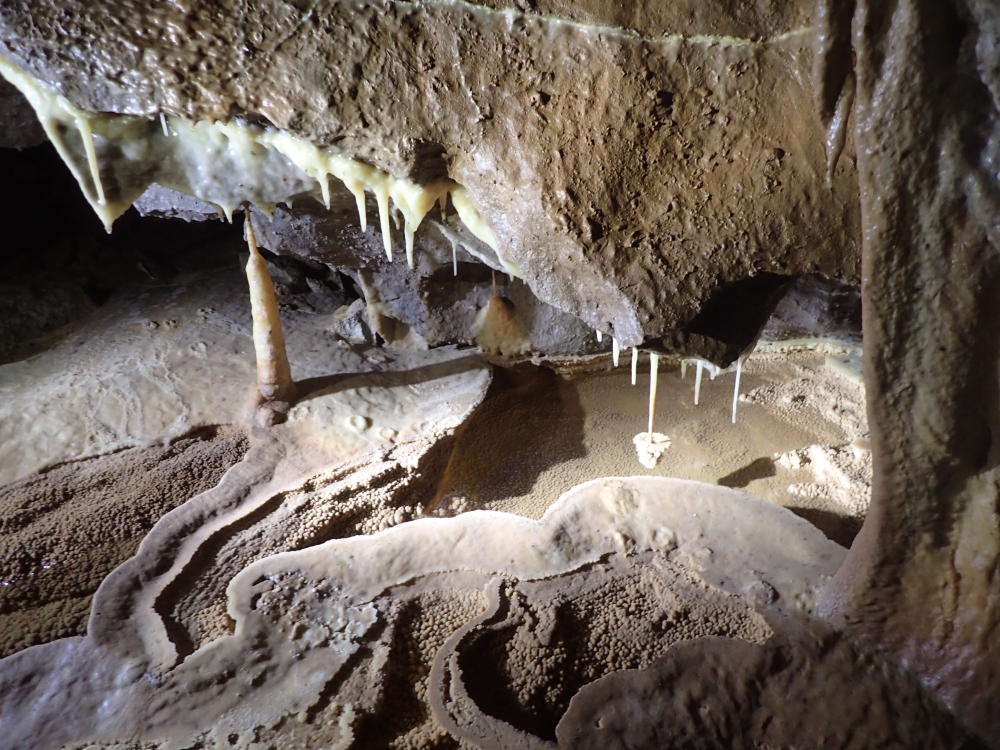 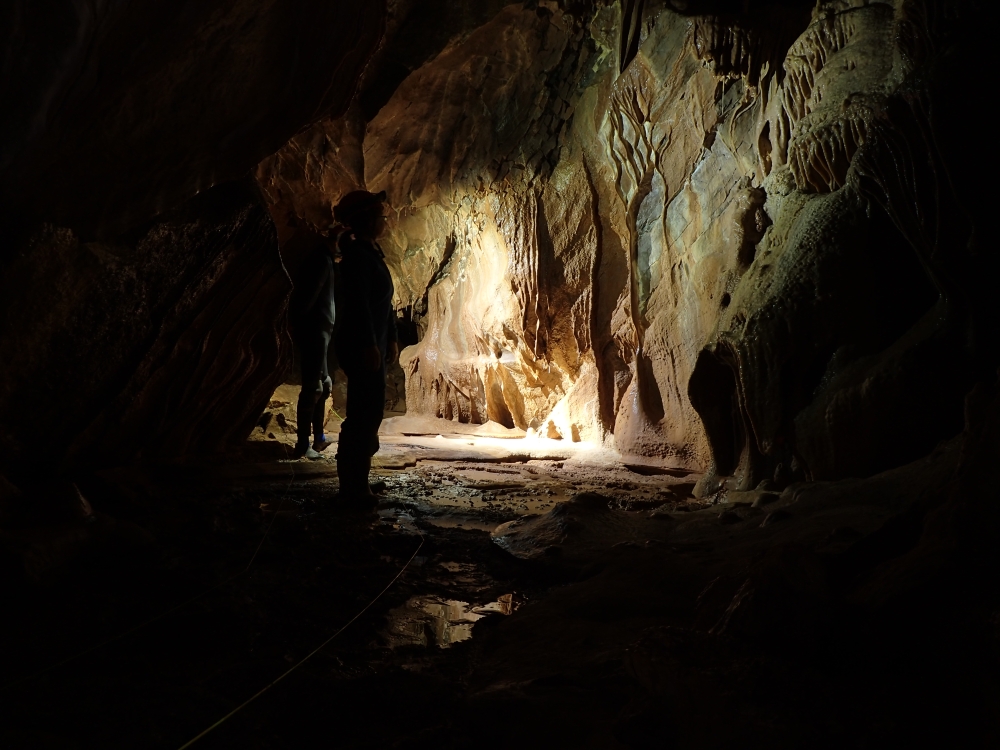 It is believed that Goatchurch would have been much like Tween Twins Hole before it became popular and got “trashed”. 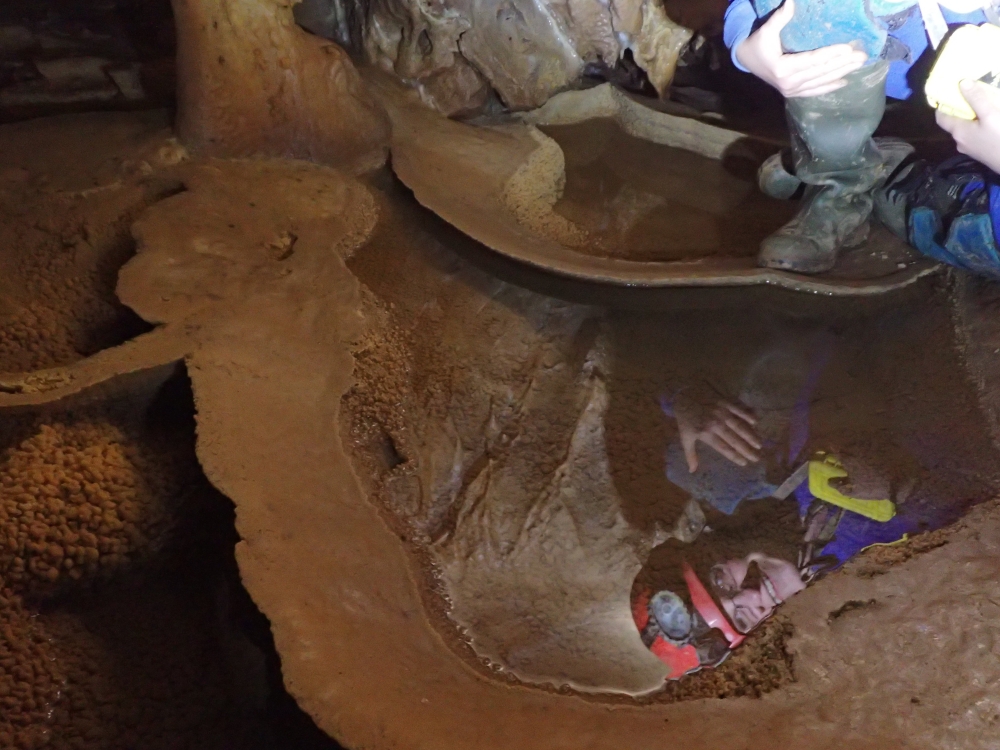 Claire gets trapped in a gour pool!

It is very cramped in places and great care must be taken when moving around as formations would quickly get broken. 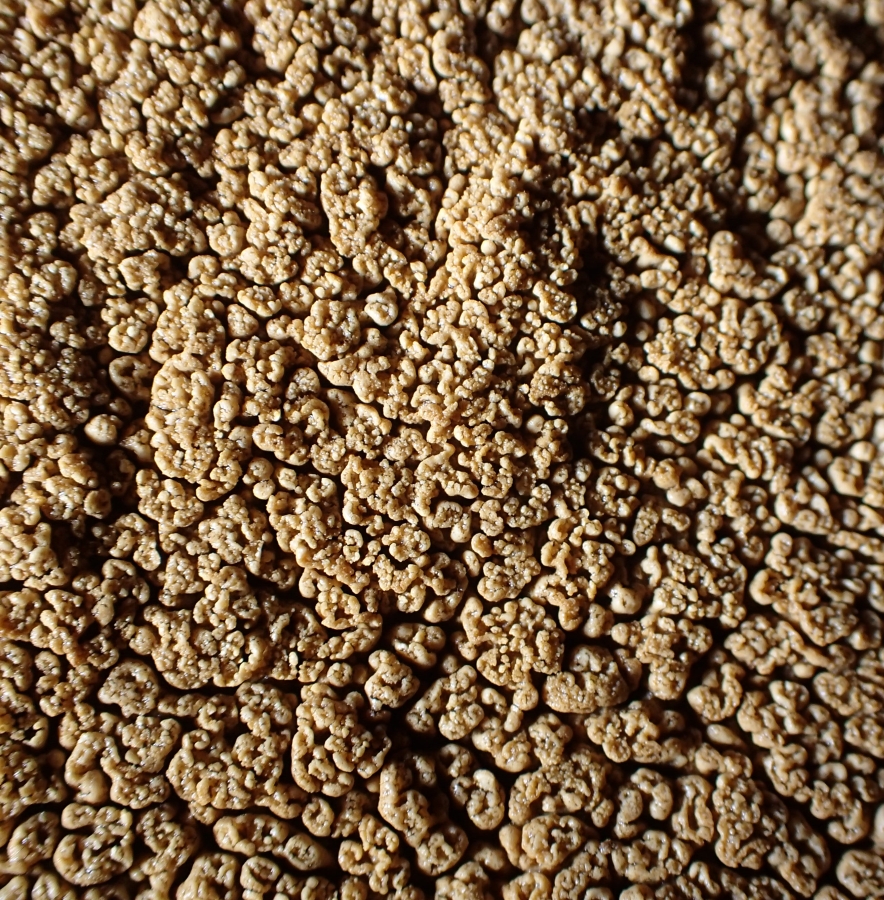 A close up of the surface of a stal boss, with a strange brain like pattern.

The Mendip first turned out to be that this was the first official leader trip for cavers that were not part of the digging team. So Claire and I had unintentionally beat the entire Mendip caving community to the post by being the first official visitors to the cave. So maybe it's SWCC that get everywhere? :)

After Tween Twin Hole Claire and I met up with Brendan and Colin and had a quick visit to the East Twin Swallet which has some amazing amount of engineering going on it. This was a quick trip of about 30 minutes.

Brendan is new to the caving scene so it seemed fitting to thrust a survey into his hands and tell him to lead us! He did a fine job getting us lost and un-lost. We explored some extreme ends of the system discovering what appeared to be abandoned digs. 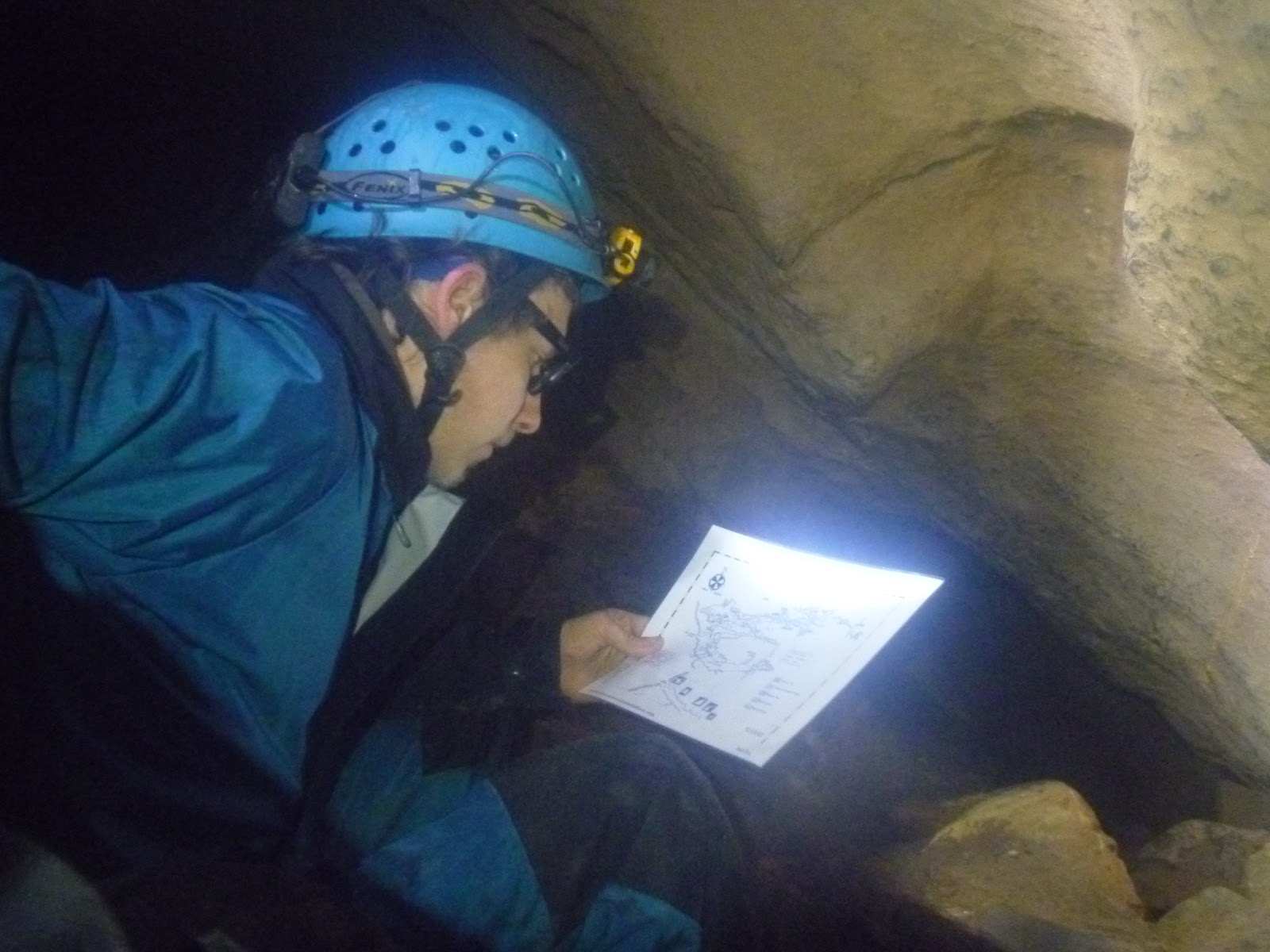 Brendan doing a sterling job with route finding in Goatchurch.

We eventually found our way to the famous Drainpipe and I managed to grab a couple of classic photos. 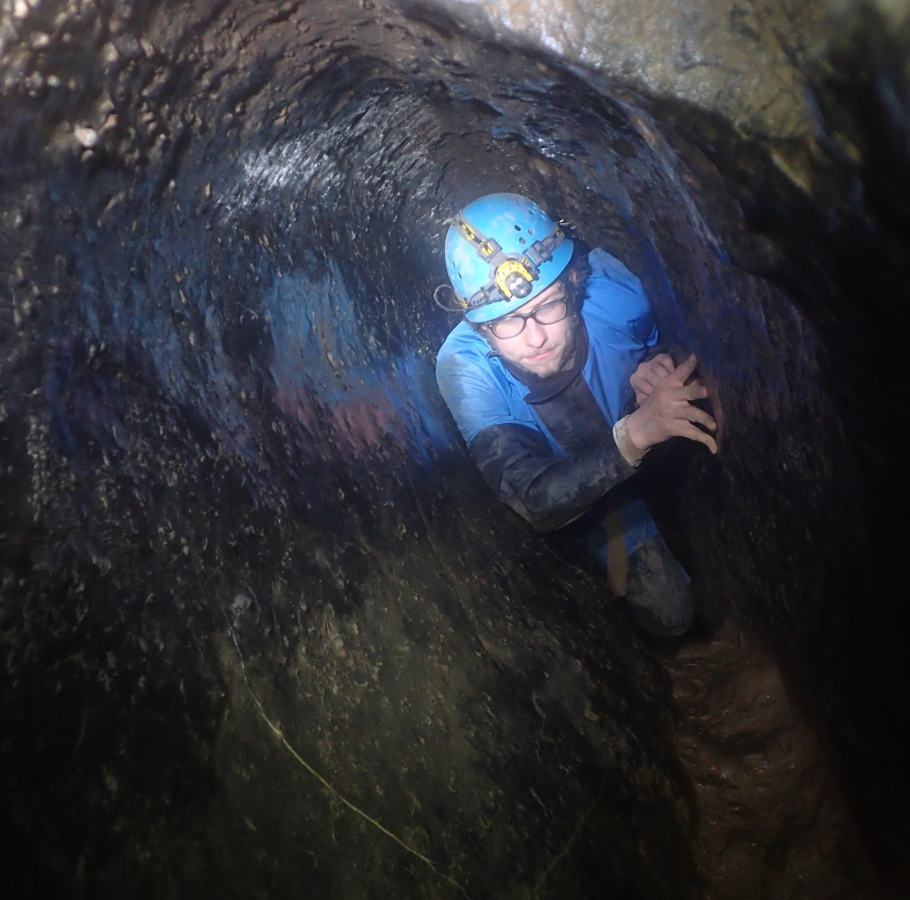 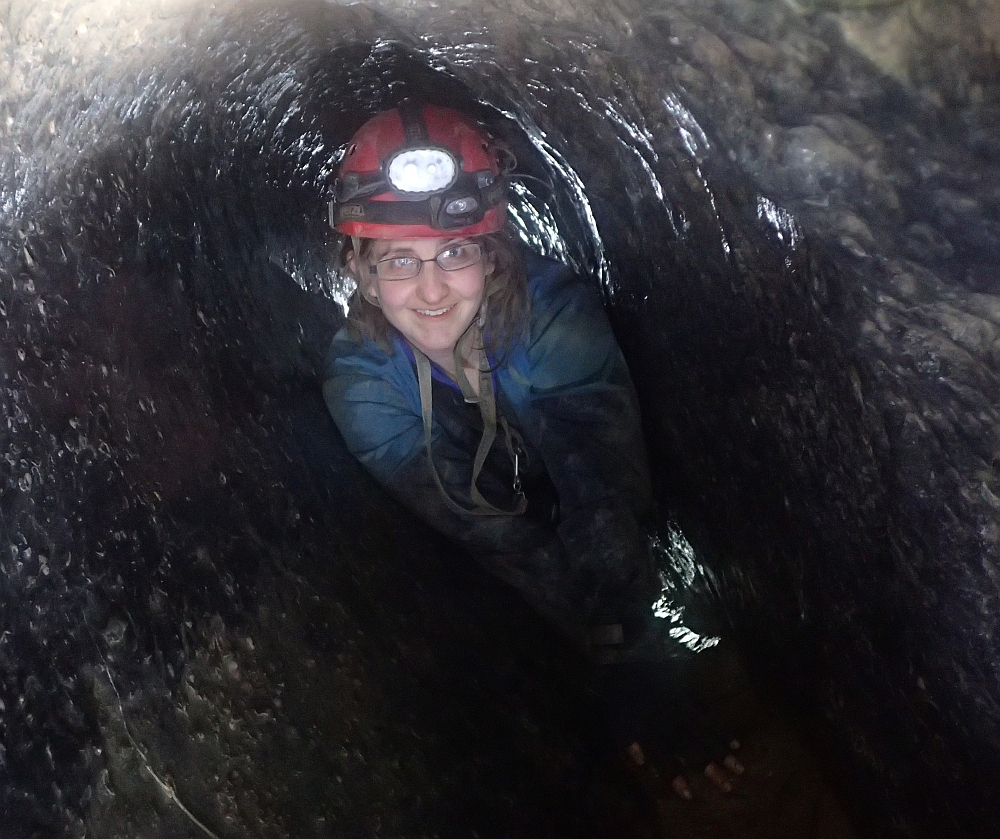 Brendan and Claire in the Drainpipe!

On the way out we had a good play on the “Coal Chute”, rigging a hand line to get up and down it. GoatChurch although small by Welsh standards can be a lot of fun and with time whittled away we had to leave as Brendan needed to catch a flight home to Dublin. It is cheaper for him to fly from Dublin to Bristol than it is for me to drive from Southampton, go figure… 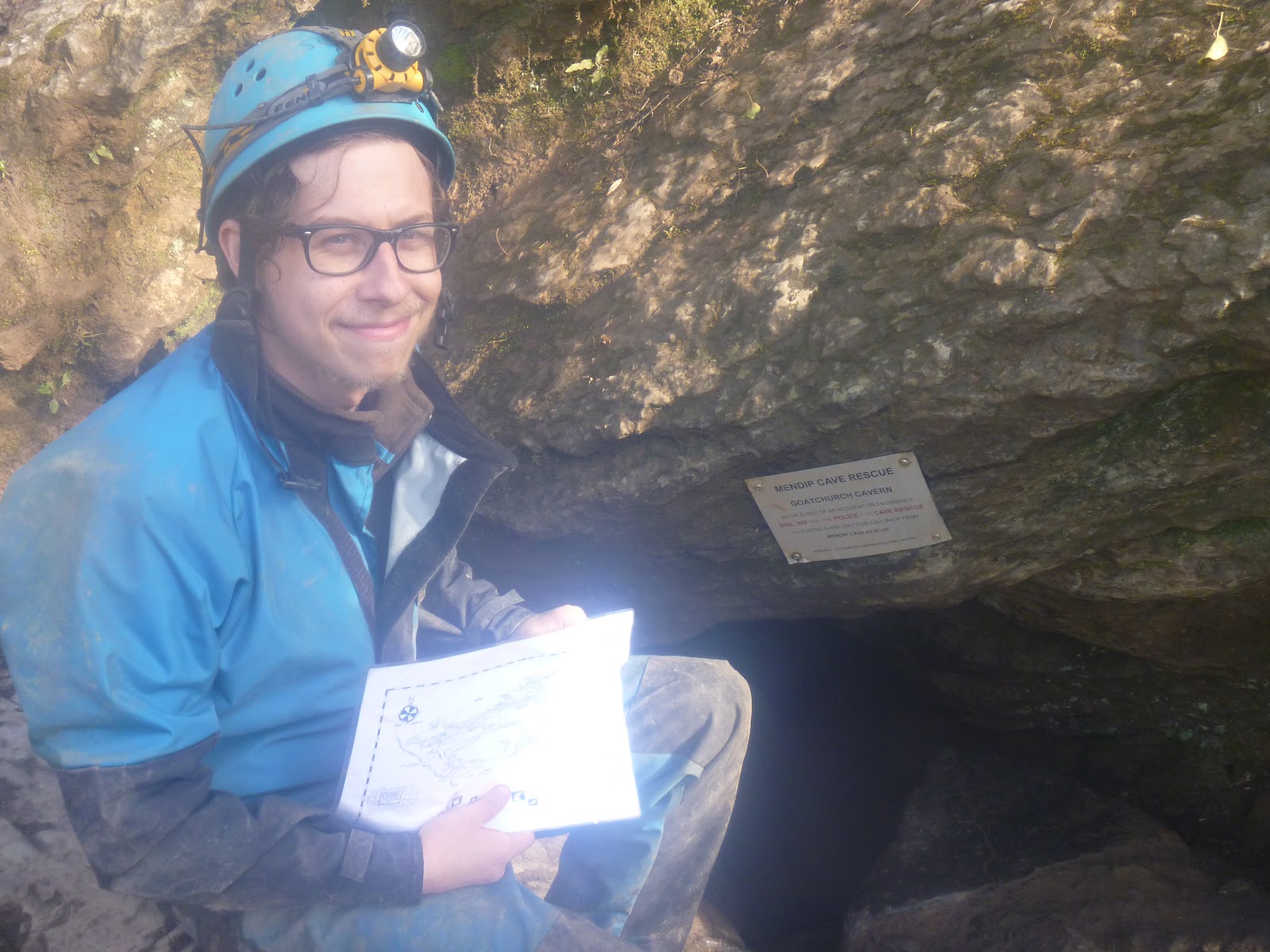 In the evening it was just Claire, Colin and I and we ate at the Castle of Comfort pub, then popped into the Hunters. I had a chat with a local caver about directions getting into the Great Chamber in GB Cave.

With a lazy start after a serious night's storm we discovered a huge sheet of metal had narrowly missed our cars and had been tossed into the wood shed. It seemed incredibly lucky that nothing else had been damaged.

We drove to Charterhouse farm, parked behind the house and marched off to GB cave in good weather. We made good progress to the ladder dig climb and into the crawling passage beyond. There is a tight section that can sometimes sump, fortunately it was more of a horrible duck. 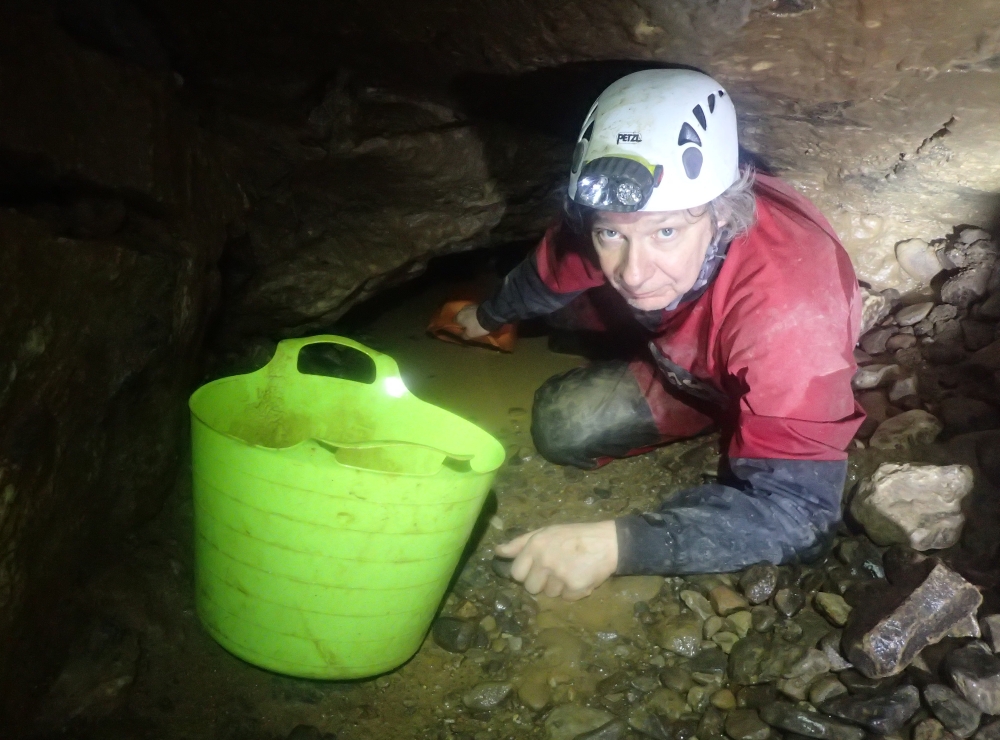 Colin bailing out the duck. Claire then took the bucket and dumped the water into shallow depressions behind us.

With the duck behind us we entered the section of a passage that we had visited before but had never found the way on to the Great Chamber. We first went to Bat Passage which is well decorated. 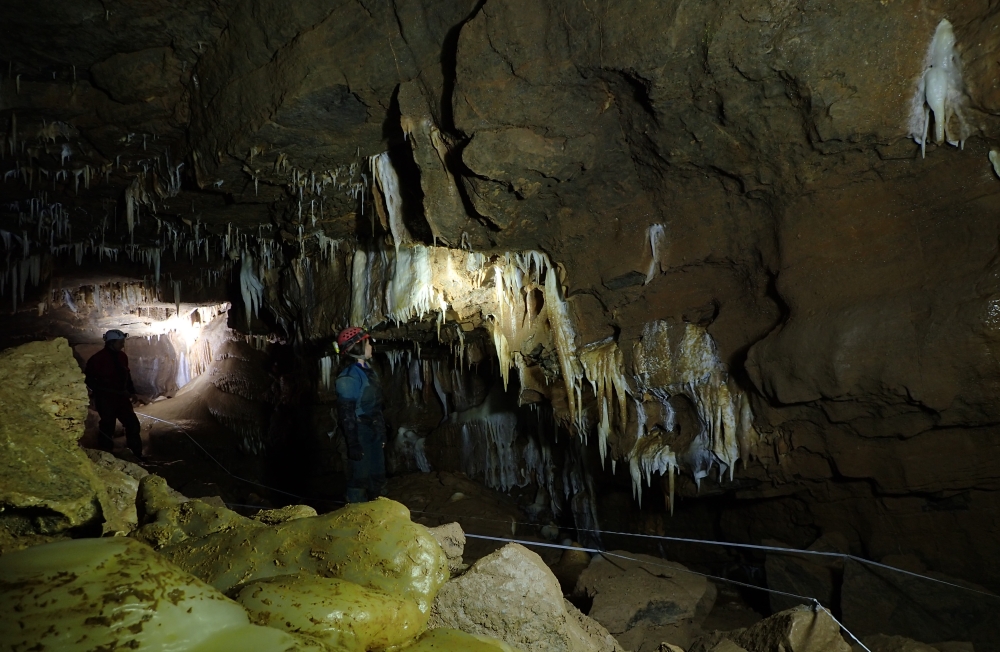 Some of the formations in Bat Passage. 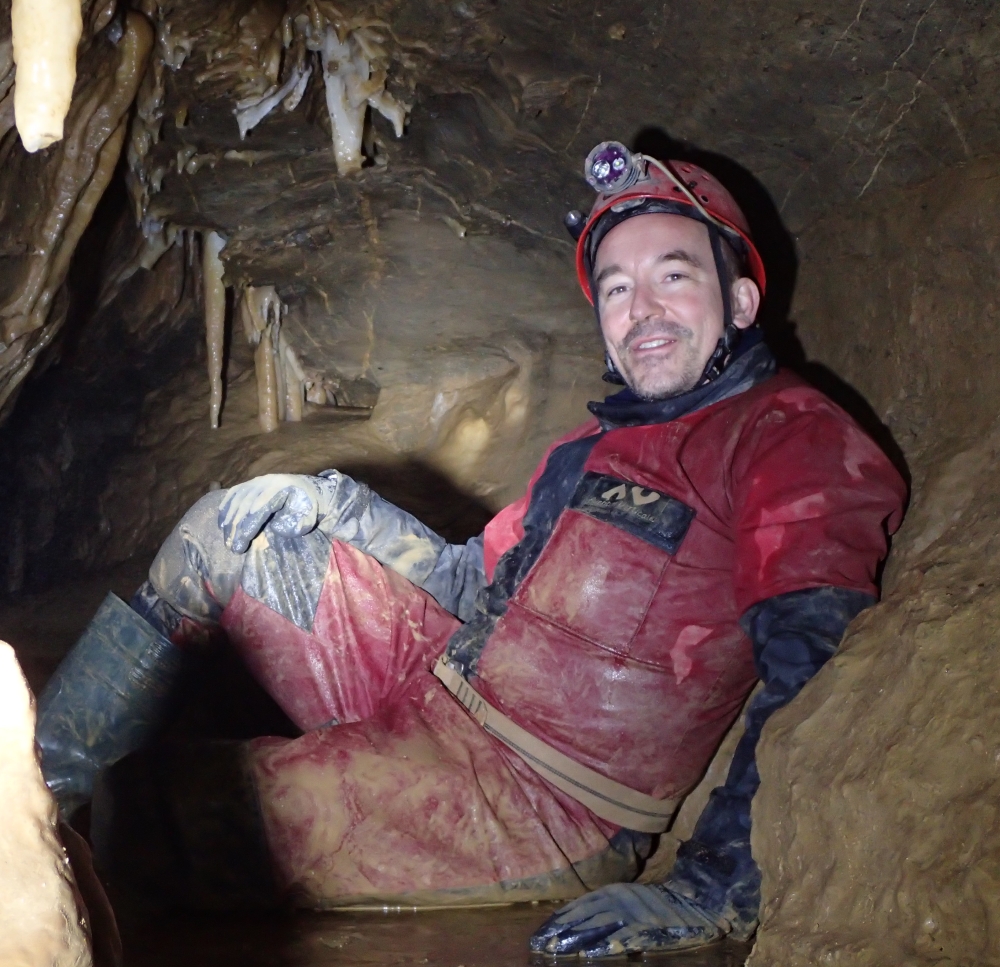 Duncan lazing around with nothing else better to do

Leaving Bat Passage via its corkscrew like entrance gave us a starting point to try and find the Great Chamber. We spent a long time searching and initially ended up in Disappointment Chamber, but Colin “The Ferret” Hoare eventually found the way on and we finally broke into the impressively large Great Chamber. 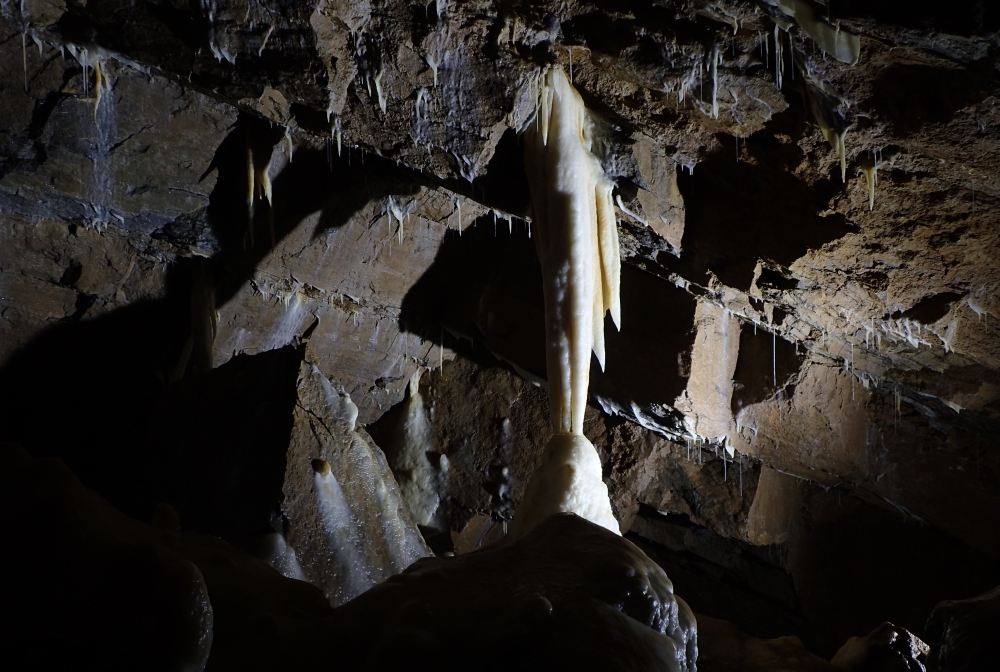 One of many stal formations in the Great Chamber. 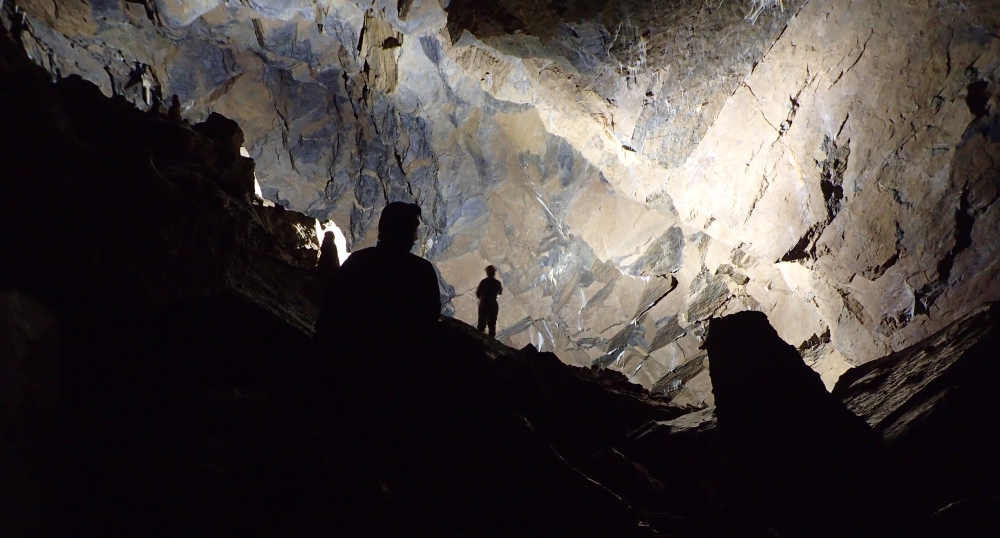 Claire lights up the back wall of just part of the Great Chamber, Colin is the silhouette in foreground.

St David's Day. What better time to visit the spectacular Hall of the Mountain King? Two of our group (Adrian and Mark) had not been to Craig ar Ffynnon before and were amazed by the beauty of the formations as well as the gooeyness of the mud.

We had been worried that heavy rain and the threat of snow today might call off the trip this evening, but the weather was not as bad as initial forecasts suggested, so off we went. Dan made incredibly easy work of opening the lock on the entrance gate (it had taken around 20 minutes to get in on my last visit...) and we headed through the incredibly pretty Straw Chamber, which amazed Adrian with its 'stunning' formations. Fast progress was made through the First Choke, along Gasoline Alley (North West Inlet will be our next destination when the weather warms up) and then up the climb. The more tortuous Second Choke caused no problems and then we found the deep welly-eating mud. Moving as quickly as possible through this meant avoiding getting stuck . . . but it was a close run thing at times. Stopping for some photos in Travertine Passage we had plenty of time to take in our surroundings. We made Adrian and Mark look away to the right as they entered Hall of the Mountain King, so that they could get to a good viewing point before they saw the formations. Then it was a nice and leisurely walk back out. Where we emerged in to a very wet night. Not ideal for getting changed in! But at least it got some of the mud off.