With the Christmas leftovers going stale in the fridge and daytime TV being a no-go option, it was time for some drastic action. Of course, that was going to involve caving.

This was Elena’s first visit to SWCC so with the weather being appallingly bad outside, even for Penwyllt, we headed for an explore around Top. Slow progress to the entrance was made as lots of tea drinking and watching the rain took place before we left.

Once underground, we made fast progress to Timo’s Table, via lower Arete Chamber, with Elena showing that she was perfectly comfortable underground. We explored around this area a little to discover where my routefinding had gone awry last time I visited here, then headed back towards the Trident and Judge via a different route to make things more interesting. We marvelled at these formations and then decided to extend the trip by visiting Cross Rift.

Although totally new to both Tabitha and Elena, President’s Leap proved to be no obstacle for them as they powered across, eager to take in the sights of Selenite Tunnel. It was then time for us to turn around and begin to head out. We took a slight detour to look at the climb up to Peter’s Pretty Passage and follow the passage running parallel to Salubrious. By this point we had been underground for around 5 hours and the group were tiring, so we headed back for hot showers and food. 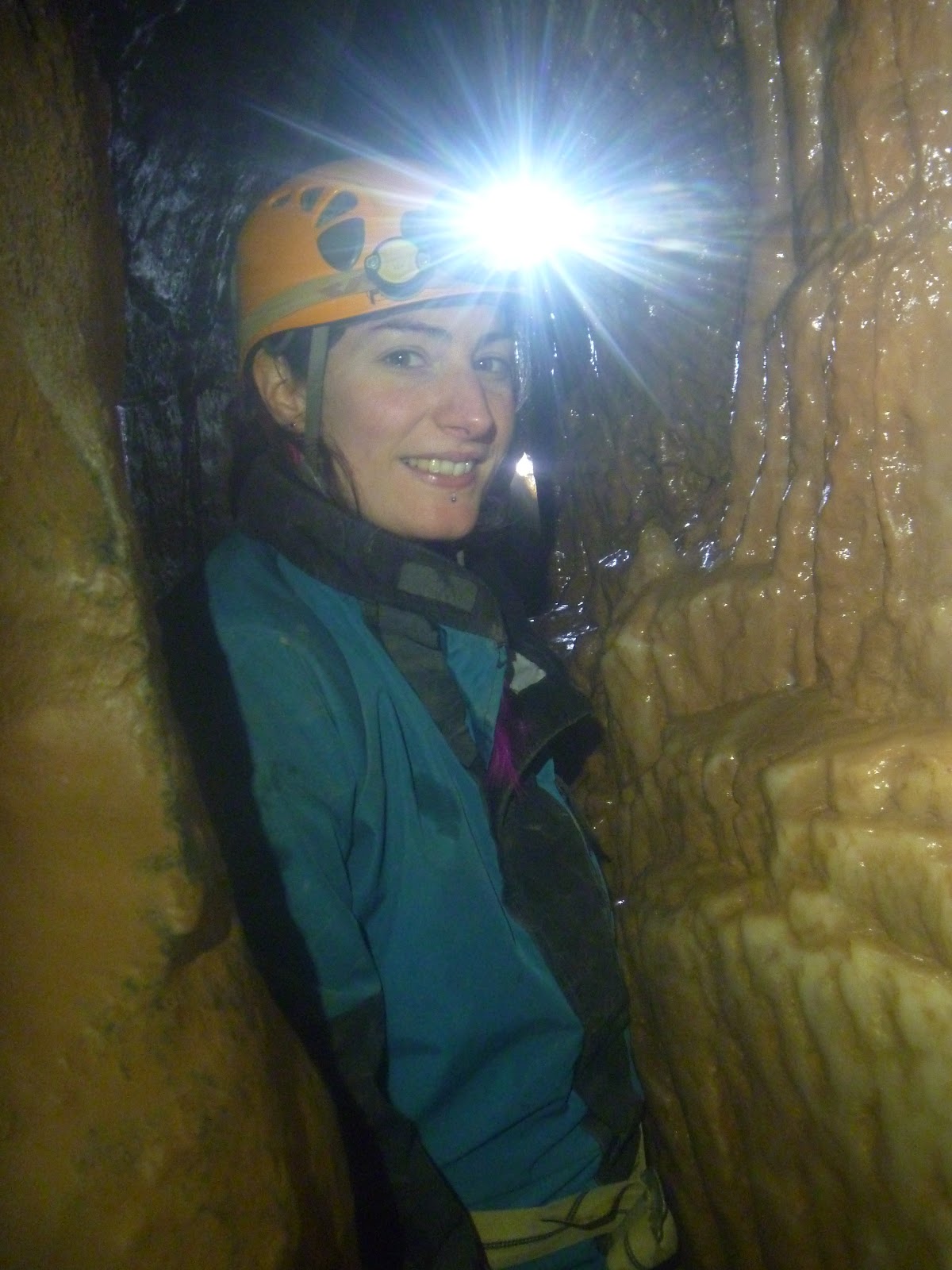 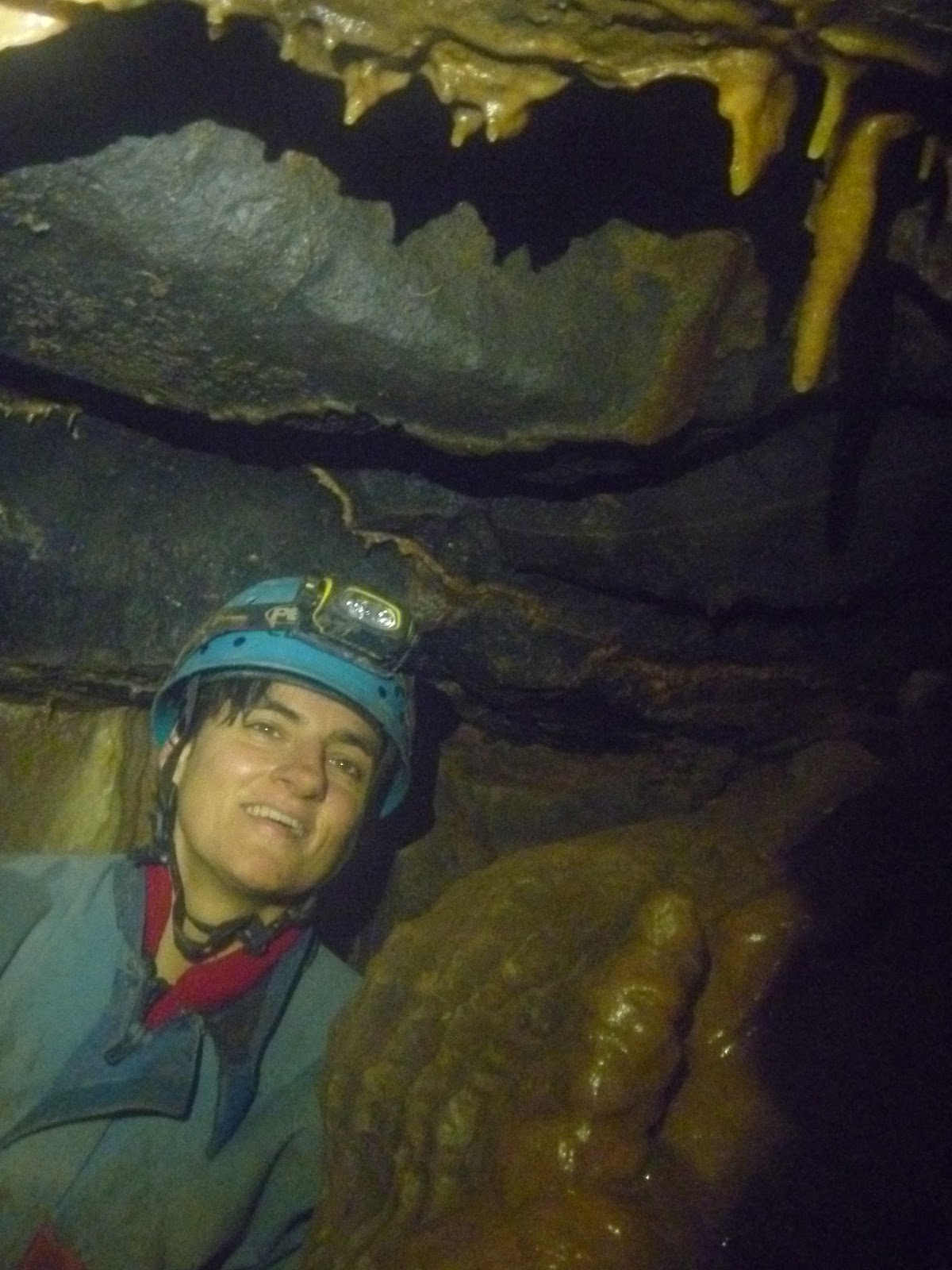 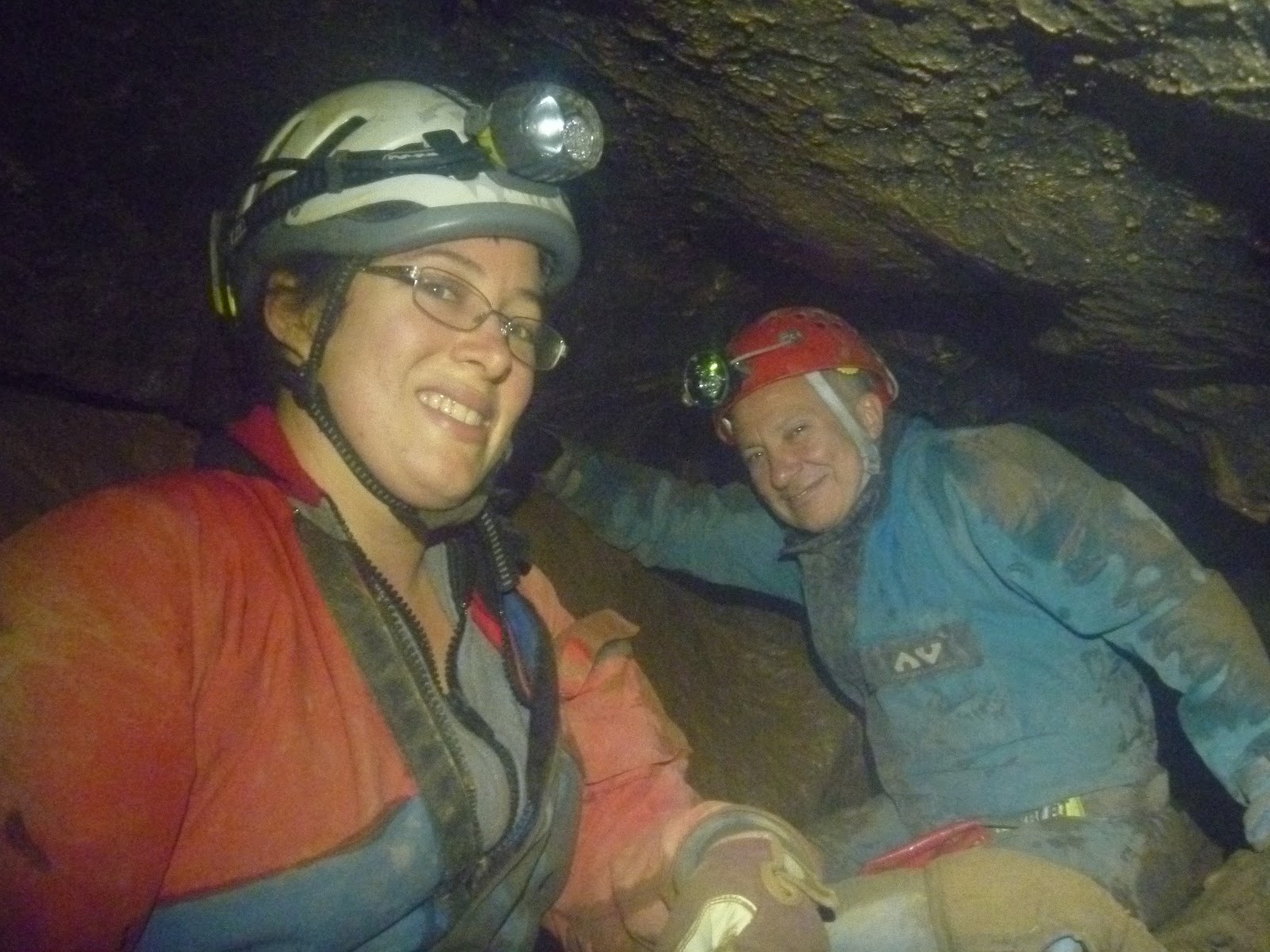 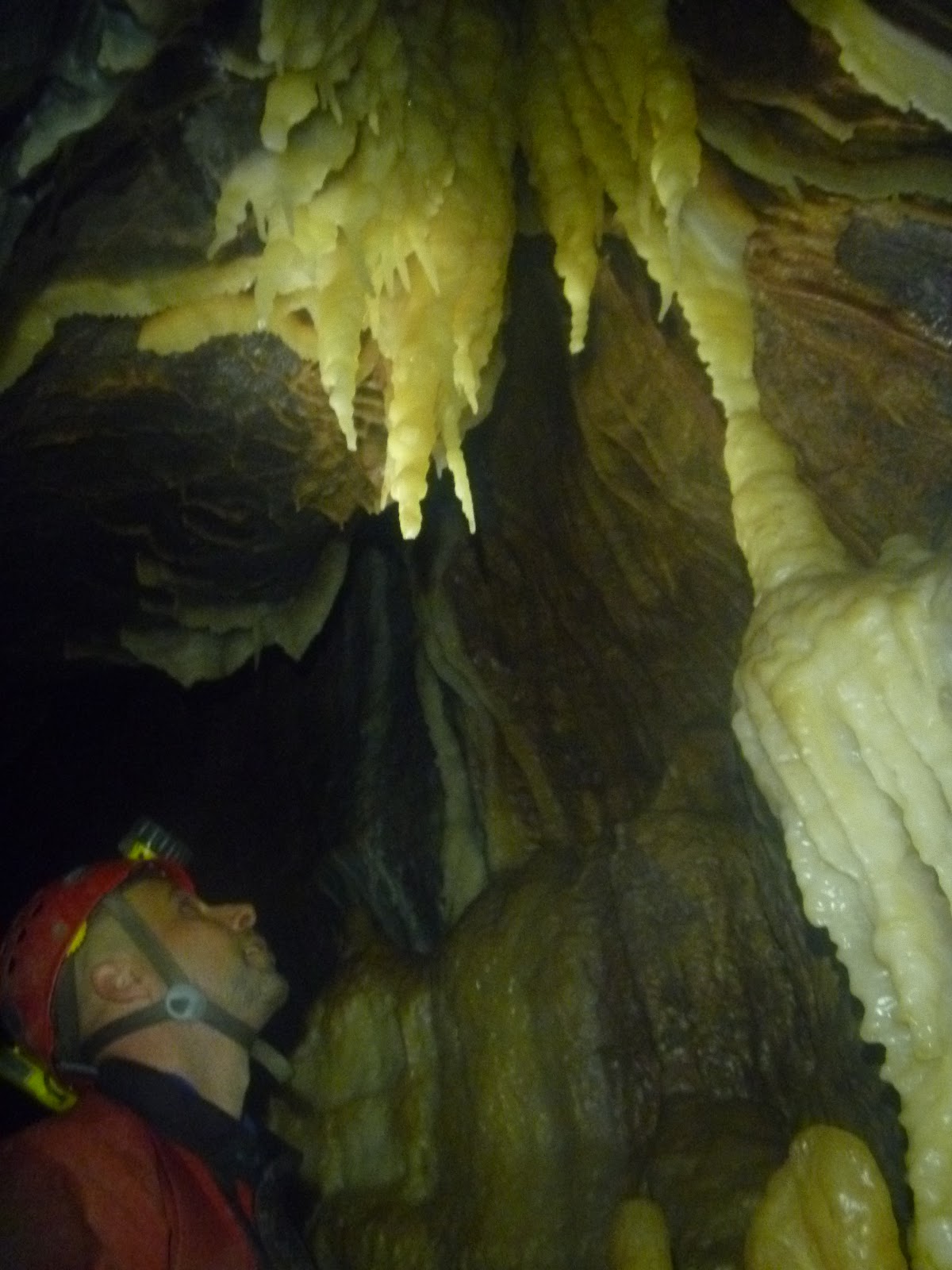 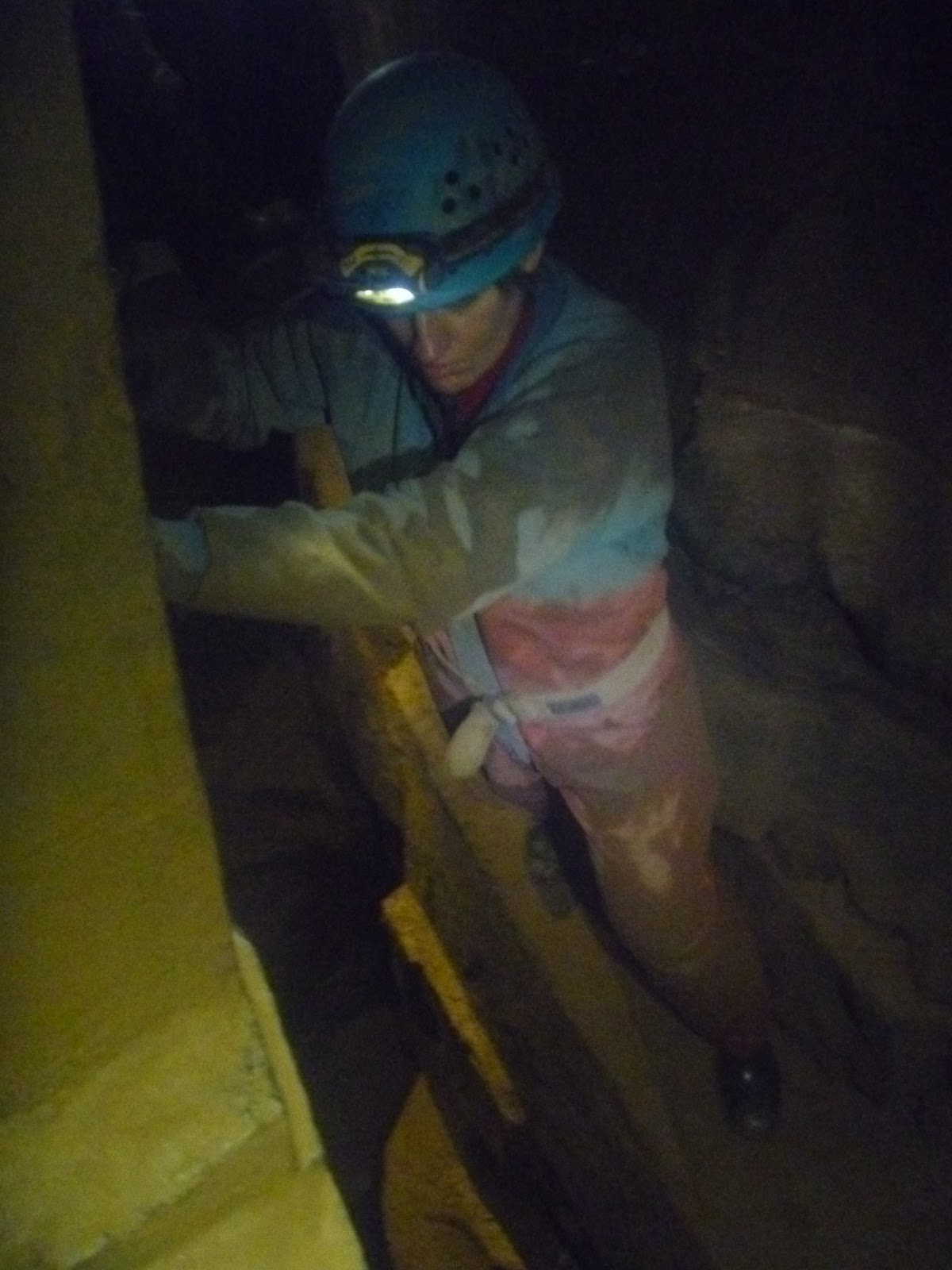 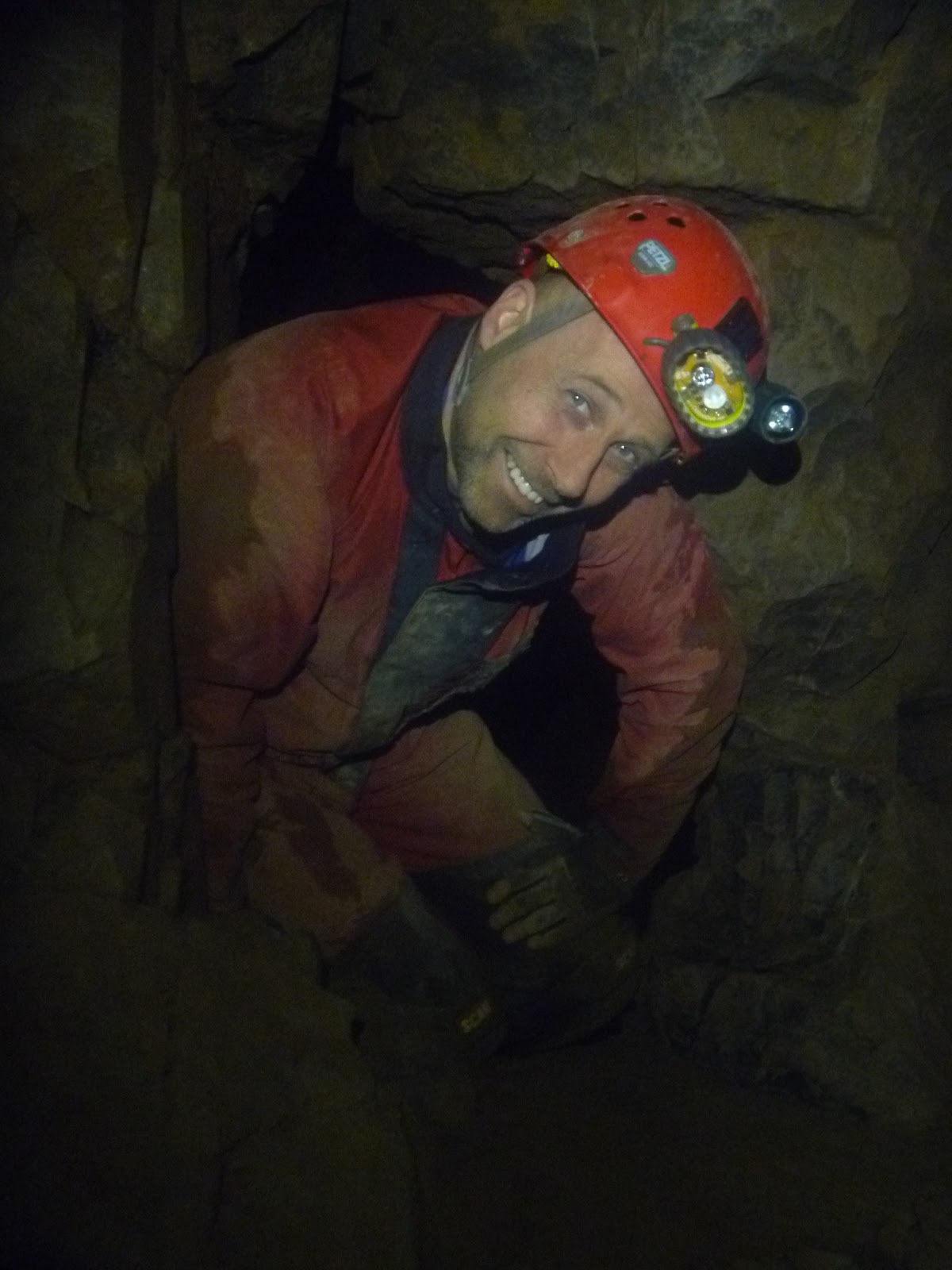 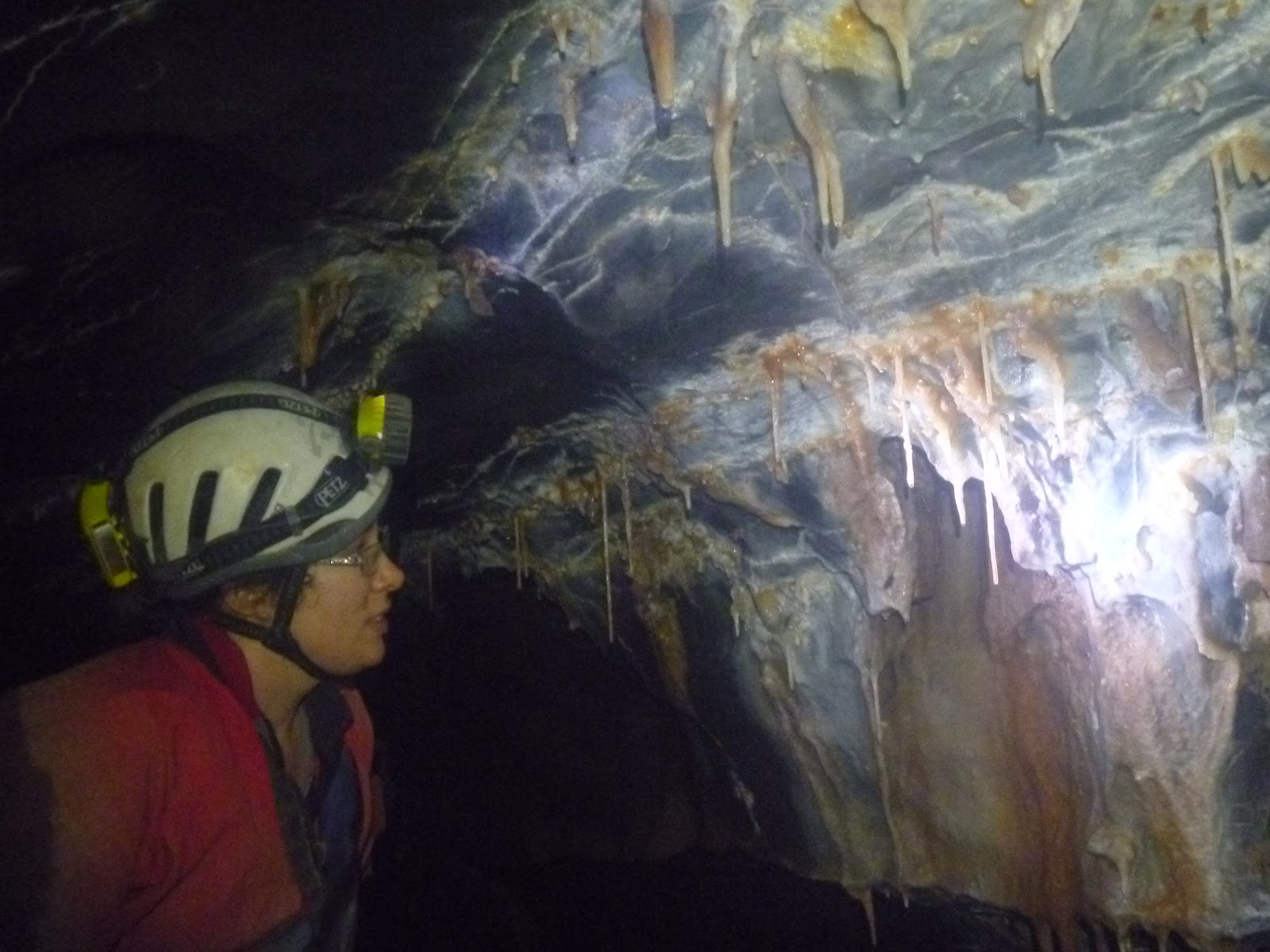 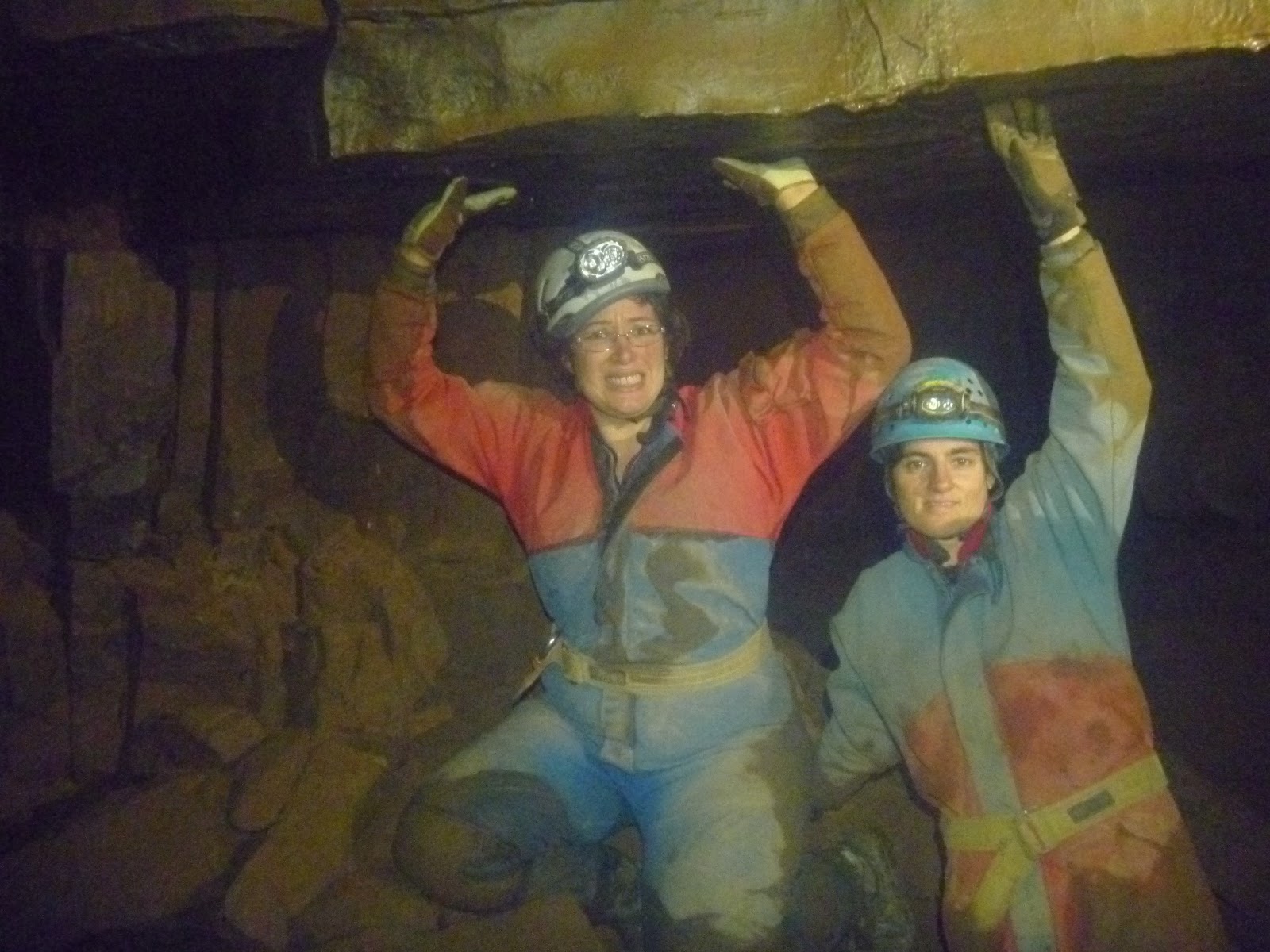 Duncan was not happy. An 8am start in order to get underground in Draenen before 10am!! We set off a little late after the obligatory faffing, but made good time on the way there. A cold wind and smattering of rain ensured minimal faffing whilst getting changed, then we were off.

Paul was keen to explore the area beyond Megadrive as he had not been there before, with the aim of finding the way on towards the Snowball. This was Jo and Steve's first visit to the cave, so excitement was in the air. Fast progress was made through the wet entrance series to the signing in book and then we headed on to Lamb and Fox Chamber and Indiana Highway. Indiana Highway is a narrow, but fairly long traverse. The very end section is roped and is over a 22m deep hole, the 'Lost Crusade'. Reaching Megadrive, we followed this for ages and then turned right down Going Square, instead of Perseverance I. It was new passage for all of us, but didn't get us to the Snowball. After heading back to the junction we went for a quick look at the Nunnery and then went and found Perseverance. But with time no longer on our side, we had to turn around and head out. New passage for all of us, so a good trip. Total trip time 6hrs.

I have always wondered about how fixed ladders in caves get where they are and now I know, teamwork! Joining Martin Hoff and co. I helped carry a 3m fixed metal ladder to the beginning of the Midnight traverse. This ladder is to replace the old and failing Brigadier Glennies ladder. Once there, the others went along the traverse to consider best approach for the next stage of its installation.
Throughout this very efficient trip it was remarked on more than one occasion how useful it was to have a fixed ladder with you, making short climbs a breeze. If they were truly easy to carry around everyone would have one!

On the way in and out Martin was pointing out various fixed aids and to top it all off I was shown another route out of Top Entrance avoiding the monotonous brickyard.

The day was topped off by a group curry at Tiffin in Ystradgynlais.

With rain that never seemed to stop it was decided to go into Top Entrance for a “proper” explore. “Proper” being Paul leading us into the heart of the Labyrinth area, getting truly (and intentionally) lost! It was strange, as I would normally be worried, but with such a strong team of cavers we just kept going, exploring lots of side passages. Eventually we ended up at what was later found out to be a horrendous climb down from Northern Canyon. We turned around and wandered in some other direction which eventually popped out in Salubrious Stream Way.

Bumping into Iain and Tim who were on their way to do some bolting work, Iain quickly showed us one end of Peter’s Pretty Passage. With a mental note taken of its position we headed off to Shatter Pillar as I wanted to show the others a way down into Lugubrious stream shown to me by Martin the previous day. We continued on and ended up in some “chamber of death” with an unbelievable amount of hanging death. Not a place I wish to visit again!

We eventually decided to head out and I used my new route out from the Wedding cake formation to the entrance.

With lack of sleep from New Year's Eve antics and a raging hangover I was dismayed by Paul actually turning up and wanting to go caving, something I had agreed to in an alcoholic haze…

We eventually settled on the idea of visiting Peter's Pretty Passage. Fortunately for us it turns out that Steve is quite a good climber so when we got to the entrance of the passage he was able to climb up and throw down a ladder for us less capable. With everyone up we carried on only to be confronted by a rather bold step. Whilst I was able to do it, Jo was having none of it! I for one was grateful as about 2m on is an awkward climb up that throws you out over nothing. Whilst I’m sure all of us with some help would be able to climb up, coming back the other way would have been s**t scary! Even Steve was not happy... So we abandon him! De-rigged the climb down and went around to the other end of the passage. Steve had been waiting patiently and quickly set up the ladder so we could climb up and join him.

This passage is pretty amazing, we many delicate helictites and crystal pools. GREAT CARE was needed to move around within the passage. My camera had ran out of power so the following pictures are from Paul Fairman’s camera.﻿ 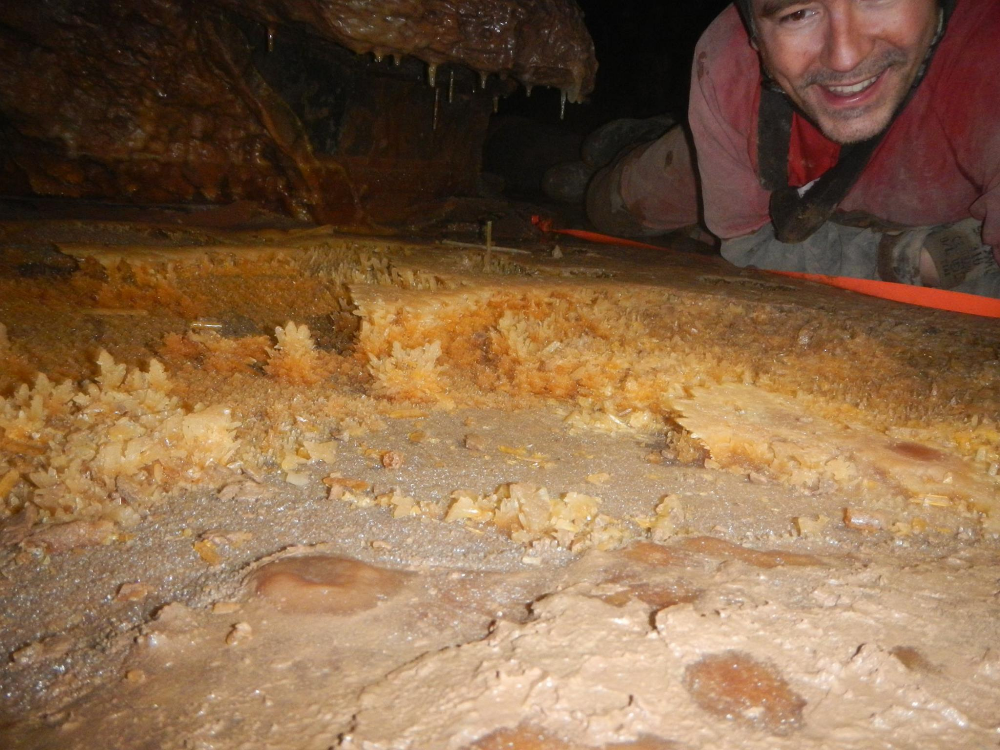 Duncan close and personal with a crystal pool

With New Year's excesses behind us, today's objective was to head to the Upper Oxbow series and descend the 20m pitch to Splash Inlet. Andy showed us how the Sky Hook worked to get the rope up there so that a ladder could be rigged - Matt had no SRT experience, so would only be coming as far as the pitch head. There are some incredibly pretty formations here, it is well worth a visit.﻿

With the pitch rigged by Andy the SRT team descended leaving Phil and Matt to explore other passages at the top.

At the bottom of the pitch is a chamber leading to another shorter pitch. Rope was rigged to a natural anchor and Claire went through a small hole at ground level to have a look at the pitch. The rope didn't reach the ground, but it looked like it was only around 2 feet above the floor when it was unweighted, so it would be possible to get back on afterwards without the rope springing away after you got off it! Claire started to descend the pitch, saw an obvious rub point and asked for an empty tackle sack to protect the rope. Reached the floor, got off, could still reach the rope, no problem! Antonia was through next.
Andy attempted to slip through this hole but got firmly wedged! I like to think it was down to too many mince pies and sherry at Christmas, but who's to say?

At chest level is a very obvious eye hole that could have been rigged through but we did not have enough rope. So at this point Andy had to accept he was going no further.
Moving like an inch worm Duncan was able to squeeze through the hole and join the ladies at the bottom of the pitch. We then gave ourselves 45 minutes to explore.

We travelled upstream to Mutiny Junction and explored various ways on and came across a fantastic crystal pool.


We were also visited by some of our favourite Finnish members, Miri and Velma. Who spent a couple of days introducing 3 new members of the Finnish Caving Club to OFD. They visited all of OFD's entrances during this time and gave their new recruits a great introduction to OFD and caving in general. Everyone looked happy and seemed to be enjoying themselves, so hopefully we'll see them all back again soon. After their visit to SWCC they then went on to the Wessex to try out some Mendip caves. Please check out their Caving in Finland website.﻿﻿﻿


The end of December also saw the launch of Toby's new company and website, LandJourneys www.landjourneys.co.uk which will be offering guided walks along the Appalachian Trail from the Spring onwards. Just in time for people to work out how they are going to shed those extra Christmas pounds and improve their fitness this year.
All in all, it was a good New Year for SWCC and its members. Happy caving in 2016 everyone!
Posted by Claire V 1 comment: 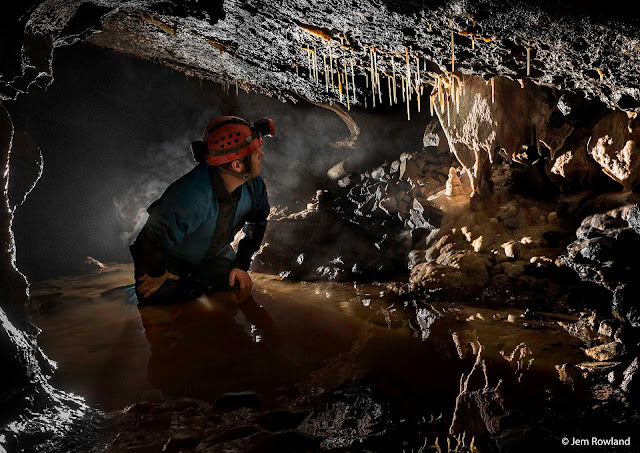 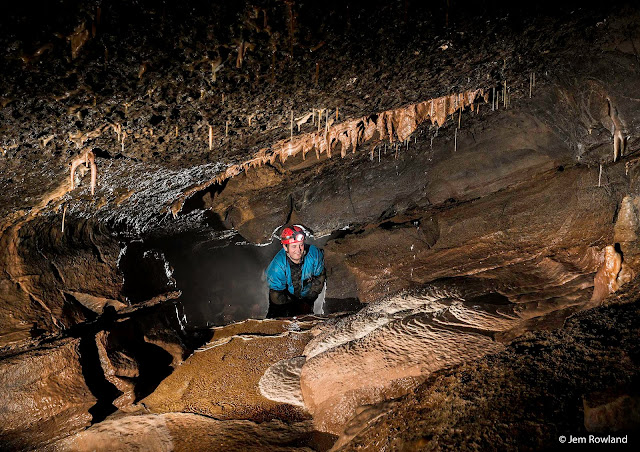 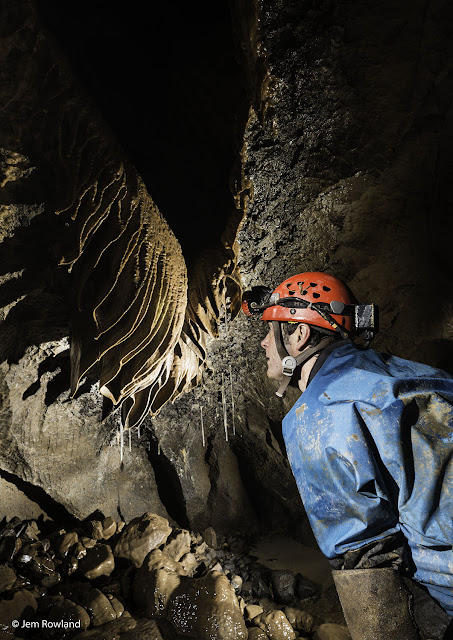 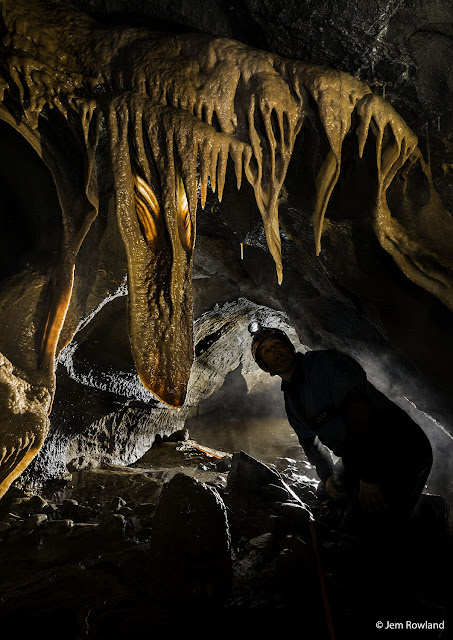 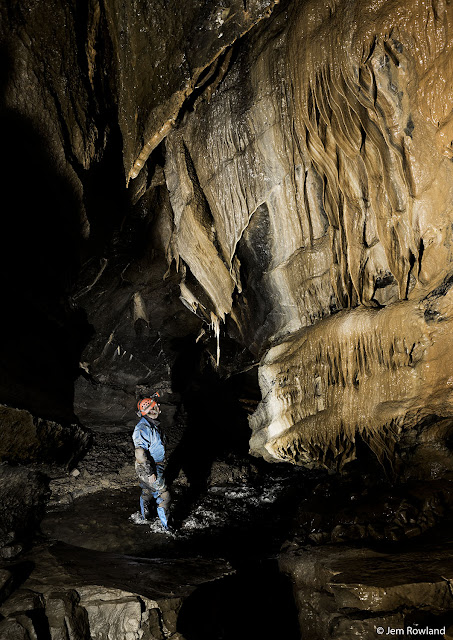 On Friday 1st January, me and my dad got up, had some breakfast, faffed a bit, waited for Simon to to get up, faffed a bit more, spoke to a few people suffering from hangovers from New Year, waited for Simon some more but in the end gave up and decided to go without him, because we couldn’t find where he was sleeping to wake him up.

Before we started I was very nervous because I had never done a trip like this with just two of us.
This was going to be our third time together to the columns. Although it was our third time together, it was our first time with just us.
When we went down to the columns, we took some rope which I carried and when we got to the slope down to cairn chamber, we decided to leave the bag of rope at the top. Normally we use the rope on the large hole and on the slope to cairn chamber but for the first time we decided not to use a rope on any of them. Based on last time, our trip was supposed to take four/five hours but it took us only two hours.
At the hole I was more nervous than before, I always had a rope and someone to hold onto to step across the hole because I can’t reach any of the handholds, because I only have little legs!  But we didn’t have enough people so I didn’t have the rope. (Not strictly true - we didn't use the rope because he wanted to try without , and he managed to reach the handholds fine with just a spotter) After I got over the hole, I felt really proud and the same thing happened at cairn chamber.


From the entrance I had to find my way to the columns without any help from dad, because he made me! Which at first I was very nervous about but when we got to the columns and back I felt pleased with myself. I didn’t even get lost!
James - Age 11.
Posted by Piers 3 comments: