A spell of hot, dry weather made us think about doing a trip that would cool us down. Little Neath fitted the bill. It was Nigel's first visit to the cave and he was impressed by the formations and justifiably pleased to get in through a rather intimidating entrance series.
I was impressed at not having to fight an army of spiders to get in through the entrance. Lisa then showed me a way above the squeeze that meant you could stay mainly dry (the boys - who were neck deep in the water at this point - couldn't fit. Sorry boys!)
After this we stomped around the main river passage, spent some time taking photographs of formations and then completed the round trip. Nigel definitely overcame his fears admirably here and a great trip was had be all. Topped off by a quick pint in The Old White Horse Inn at Pontneddfechan, meant it was a great sociable evening. But most of all, well done Nigel!

First of all, thanks to Allan for organising this! We stayed at the Anglesey Outdoor Centre, the weather was amazing and it was Brian's 70th birthday. All this provided the perfect backdrop for a weekend filled with mine exploration and good company.


Saturday we all arrived bright and early at the Parys Mountain carpark. Three members of the Parys Underground Group (PUG) had kindly agreed to take us all in to the mine - no mean feat with almost 20 people wating to go underground! We divided in to 3 groups, one group would do Parys-Mona, the second would do Mona-Parys and the third would explore the upper levels of Parys. I did the Mona to Parys trip and it was a goond one. This was a pretty active trip with a couple of ladders, hand-lined climbs, crawls and wading through water. And plenty to see in the form of Copper Sulphate crystals, snotites, snotite curtains and Bronze Age workings.
﻿

For modern day Parys Mountain, it all began on 2nd March 1768 when a large vein of copper ore was discovered there. Copper was mined at Parys Mountain and then taken down to Amlwch Port where it was processed further before being shipped to Swansea and also around the world. Indeed, the mine later developed into one of the largest copper mines in the world, the largest, some might argue. Apparently, so influential was Amlwch and Anglesey copper that the British navy under Lord Nelson used the metal for sheathing its ships and for use in manufacturing cannons. Incredibly, it seems as far back as 4,000 years ago, during the Bronze Age, local people had discovered traces of copper here and on the trip we were shown evidence of Bronze Age workings (dug out using pebbles).


The through-trip was mainly dry, but there were some sections of water that were waist deep and the connection itself, which was the drainage level between Mona and Parys mines, was constricted and the water was slightly higher here. I was bending at the waist to walk through the passage and the water was a couple of inches below my face. We were told that the water level varied here and at times it was necessary to remove your helmet as there would be only a few inches of air space. The water in the mine was also incredibly acidic (pH of 2 in places; tap water would be around 7) and there were regular wash stations to clean eyes if any happened to splash in your face. I know this doesn't sound good, but it didn't cause us any problems in there.
Above ground is a surreal, alien, landscape with red, yellow and brown hues of ochre. When the light catches it, it is radiant and almost pretty really. 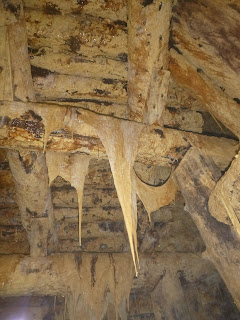 The afternoon saw us head off to the coast for some exploration. Several of us went to South Stack to look at the lighthouse. It was then time to help Brian celebrate his birthday! How many people can see they had their birthday meal in a yurt with 20 of their friends!

Sunday
Road trip to Llandudno and the Great Orme! The morning saw us head in to Ty Gwyn mine, which was right on the seafront. We had some very strange looks from people as we were standing there in caving kit and then disappeared down a manhole in the middle of the promenade! Members of the Great Orme Exploration Society were generous with their time and helped us out by leading trips, or providing advice and a survey. This was a nice short trip, around 1 1/2 hours. Plenty of artifacts to look at and mud to stomp about in.

Ty Gwyn was first opened in 1835 and during its working life produced over £100,000 worth of copper. It finally closed in 1853 after many years of continuous flooding. Copper still lies below sea level there and is perhaps awating a future mining enterprise.
Following this trip, the groups split in two. Some of us headed home and others went on to visit the Roman Shaft on top of the Great Orme and enjoy ice cream in the sun.


Thanks to members of the Parys Underground Group and the Great Orme Exploration Society for giving up their time and arranging trips for us.
Posted by Claire V No comments: