It all started off so well! Wake up a 5.30am. Yes. Taxi to train station at 6am. Yes. Catch train to Cardiff at 6.30am. Yes. Then things started to go wrong. Leave Neath. No. Arrive at Cardiff at 7.23am. No. Train broke down and got delayed by over an hour. Yes.

But then things started to go right again. I met Tarquin in Cardiff just after 8.30am and we headed over to pick up a key for Draenen. All went well and we were changed and ready to go underground for 10.30am. Considering it was barely 2 degrees celsius at this point, we were pretty keen to get underground as it would be warmer there. I had one literal slip up on the way to the cave after going flying on a patch of ice on the road. Hmm. 'Things come in threes', I thought, and this is the second thing already. What next??

We passed through the entrance series quickly, naturally relishing the grovel in cold water and the icy waterfall down your back. Then in no time we were at the signing-in book at Cairn Junction and Tarquin was off like a whippet. White Arch Passage, Lamb and Fox Chamber, Indiana Highway, Megadrive, Perseverence II all passed by at warp speed. Though we did pause to look at the fossilised dorsal spine of a shark near the start of Raiders Passage en route. There was plenty of boulder hopping (Tarquin) and boulder slipping (me) and then we were at Sugar Cube Chamber looking up at the huge wedged rock - the Sugar Cube itself - without standing directly under it for too long, as it doesn't look to be held up there by very much! Elliptic Passage, Big Beauty Junction, Gone with the Wind and Midwinter Chambers passed in a blur and then we (I) had a quick snack and break at the Snowball before we dived in to the Last Sandwich. This is a lengthy 300m of low crawls and squeezes. The recent modifications in that area mean that someone my size doesn't come anywhere near touching the sides any more.

Soon we were popping out in to the massive MSAD (More Singing and Dancing, being the clean version of the name). What an incredible place! I first 'saw' this in 2014 with a less bright caving light. Even with a much more powerful light it is still impossible to see it all. This place is vast, and is made even more impressive considering you have just come through the Last Sandwich crawls to reach it.

Decisions, decisions! Where to go first... Head straight for the Geryon or go and look at Nicola's Grotto. I opted for the Geryon as this was the furthest away from our current position and I fancied doing that while still feeling fresh as I had wanted to see it for a long time. With Tarquin on the hunt for CCCs (cryogenic cave calcite) and me photographing every helictite in sight and having a play around with my new camera, we took our time to get there and just enjoyed being in that section of cave. It was great. Iwouldn't say I am very familar with Draenen (my trip total there is less than 10 trips) and being able to go in with Tarquin who knows the name and history behind every passage was a real treat.
We headed on past Medusa's Children (amazing!) and then on to Cantankerous Surveyors' Passage.
This was not as long as I was expecting it to be. I had envisioned another very long crawl, but it was only a few feet long to get to the Geryon's Lair. The first view you get of the Geryon is spectacular. You enter the bottom of the chamber and look up at the Geryon and a fantastic domed roof of the chamber.
I was delighted to have finally reached the Geryon and spent quite a while taking photos in the chamber. We then headed up for the end of Cantankerous' Surveyors (which ends in a dig at the moment) and then headed back to the large passages of MSAD and the Hall of the One.
From here we experimented with taking some photos in the large chamber and then headed up to see Nicola's Grotto. This was excellent and well worth the visit and subsequent photos.
We turned around and headed back to the Hall of the One again. It looked incredible from this angle, so we paused for more photos.
Next on the agenda was a bit of an explore to Squealing Like a Stuck Pig and Pisspot Passage. Neither were quite as unpleasant as they sound, but then I didn't go the whole way down Pisspot Passage. I let Tarquin explore the rest of that for a few minutes while I gathered my strength for the return trip. We'd been pretty fast so far, so I wasn't sure how tired I would be on the way out. We turned around and headed back down via a slightly different route to MSAD. We then decided to have a quick look at the Snowy Christmas Tree before heading on out. This is definitely worthy of a diversion when you are in the vicinity of it.
We had a late lunch (around 7pm) at the entrance to the Last Sandwich and then began to head back. I feel myself getting more tired and slowing down on the way back, but we managed to exit Draenen by 10pm and then headed over to Chris and Judith's for a very welcome cup of warm tea after getting changed in the ice cold wilderness of the car park opposite the Lamb and Fox. Altogether it had been an excellent 12 hours underground and I wouldn't hesitate to go back to the Dollimore Series again - both to do more of my own routefinding and to see more of the area itself. Thanks for a great trip Tarquin!


Our second day in Wales proved to be even snowier than the first - just a few miles down the road recorded the most snowfall in the UK, almost 12 inches! We were intending on heading to Dan Yr Ogof but high water levels and travel proving tricky meant that we headed back into OFD instead. 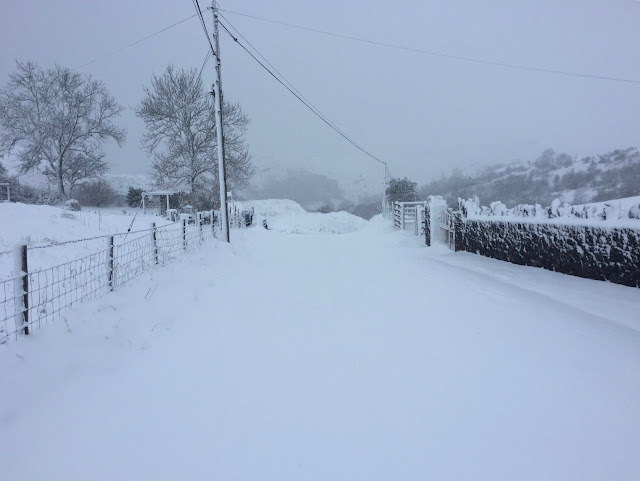 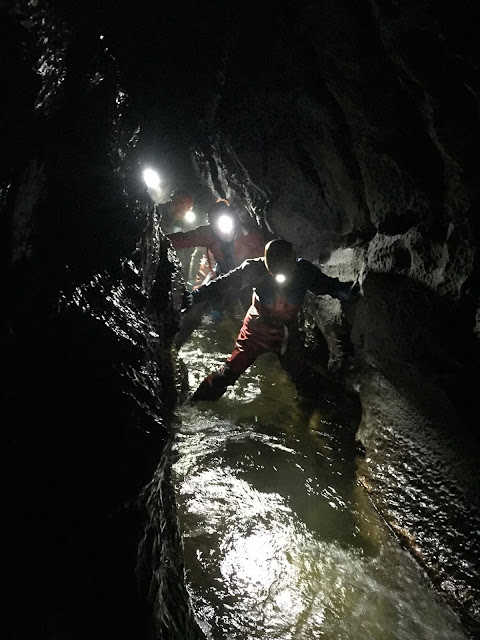 The previous day I had managed to repeatedly dunk and splash my entire self into the pools along Marble Showers like some sort of aquatic masochistic, so I was absolutely loving the addition of the scaffolding poles to shimmy across on this trip. I still managed to get seemingly damper than everyone else!

I soon managed to warm up by posting myself through through the Letterbox, where I deployed a most inelegant manoeuvre akin to some sort of flopping manatee.

After honing this 'ocean creature in distress' inspired technique exiting via the Cwm Dwr crawl the day before, I was able to deploy it once again en route to the divers pitch. In those tight squeezes I began to regret every extra biscuit I have ever stolen from the office kitchen. It was all alright in the end though and I quite enjoyed the climb down the pitch, although I did manage to get fully splashed once again. I must just really like a wet look.
Possibly my favourite thing about exploring OFD was seeing how much the character of the system changes - emerging from twisting crawls to canyon like chambers was thrilling to experience for the first time. It would be great to spend some more time looking at the formations too; I was totally hypnotised by the pulses of shimmering water flowing down Heol Eira.

I really enjoyed how different physically it was to explore when compared to the caves in the Dales which I am used to - I loved the sheer length of the stream ways, and climbing as opposed to SRTing. It's tantalising to think that there still so much left that I haven't visited yet - heading back is top of my trip wish list for 2018!

December 31st 2017 was a wonderful example of SWCC members coming together and proving that many hands make light of hard work. So read all about it or even better watch the video!

Ashford Price, the owner of Dan-Yr-Ogof show cave had very generously offered the contents of the wishing wells in the cave system to the SWCC replacement roof fund, but of course, we had to recover the coins ourselves.

Andy Freem put out a call on Facebook before Christmas to see who could help with the initial collection and possibly the sorting of coins. With initial interest high, the date was set and times agreed.


There were 6 wishing wells to collect from, 5 in the cave and 1 outside. The largest of the wishing wells was going to be the most challenging as it was a deep pool.

Graham came to the rescue and produced a submersible pump (what does this man not have in his bag of tricks?).

Antonia Freem and Steve West were the official video recorders and everyone else donned gloves, boots and caving kit.


Wishing well #4 was the biggest and Graham had set up the pump to drain it. By the time we started to collect coins from this pool it was about half empty of water. Initial collection was wet and miserable but as time moved on the pool was drained to a muddy puddle revealing many coins!


Wishing well #6 was outside and was apparently a pool of coins layered with much leaf debris making for a muddy collection.

By 1pm all wishing wells had been cleared and bucket loads of coins were transferred back to the club hut. We could hardly believe just how many coins had been collected!


With the 1st half of the job done… Now began the sorting. What was truly amazing was the enthusiasm and the team spirit in sorting the coins, many people at the club lent a hand and what would have surely taken a week with a couple of people was smashed in 5 hours!

Initial sorting started in the Dining room but Harvey was preparing the New Year's Eve Buffet so we moved to the long common room.

During the primary sort banter was high with everyone cheering when a pound coin was found. Jokes about peoples piles flew around the room and even a bitcoin was found…! 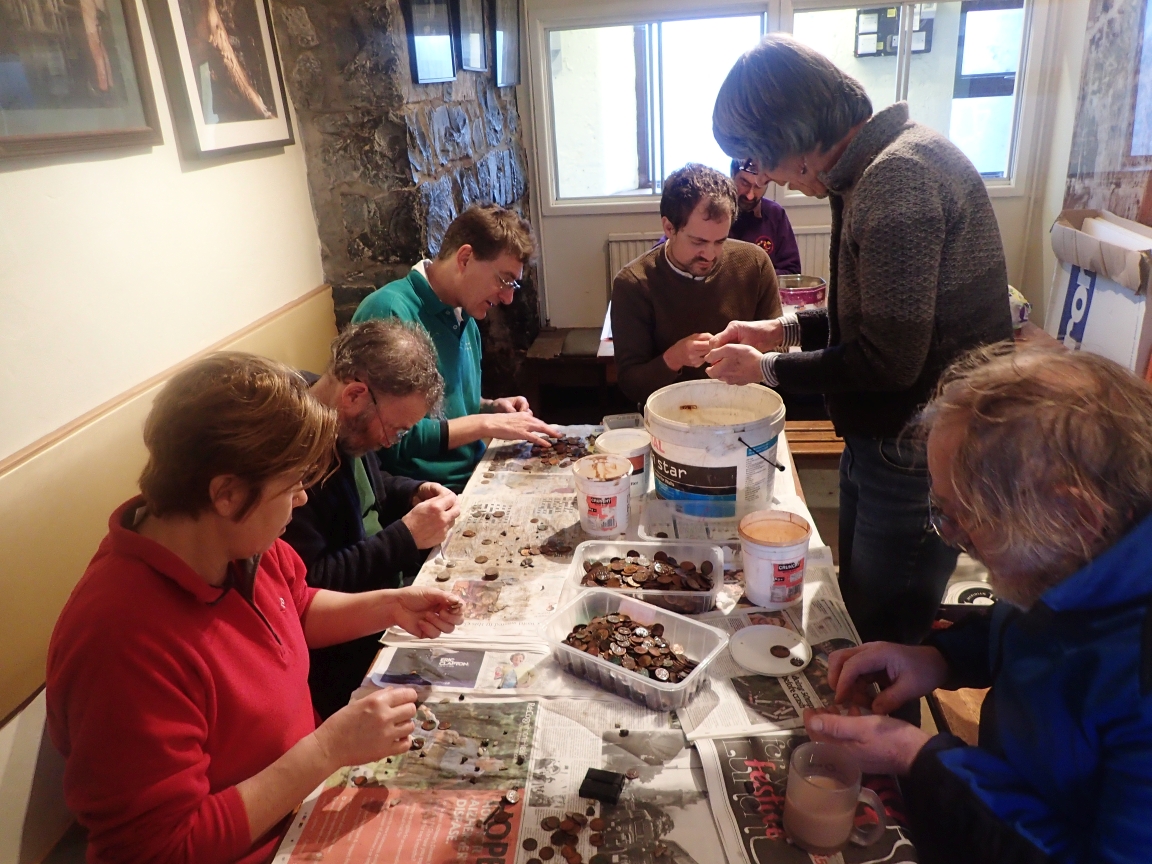 Andy overwhelmed by the help even suggested a break but everyone agreed to keep going and by about 5:30pm all coins had been separated out.

It was a truly amazing example of people coming together to get a job done and the rewards were high. The initial banking of pound coins only has raised £620 for the roof fund! The remaining 1p, 2p, 5p, 10p, 20p and 50p need cleaning up, bagging then taken to the bank. The bag with 20p’s is so heavy you would do yourself an injury trying to lift it! I wonder how much is in it…? 😃

Antonia and Steve filmed the event, you can watch it by clicking on the link below.