After dinner speakers R us

Only 9 days before the event Les Williams contacted Mark and asked if he was free on 21st October as he needed an after dinner speaker for the 83rd Wessex Cave Club Annual Dinner. Having not been able to find a suitable excuse Mark then contacted me and asked if I would be one half of a double act.

The slot was scheduled to last for 15 to 20 minutes. Mark's idea was basically for us to trade insults between short compilations of Caver Keith videos. It seemed a half decent idea so for the next 8 days we honed the script and assembled the videos. However neither of us were really confident that it would work with a large unfamiliar audience of about 90 people.

Les said that he could provide a large screen, projector, amplifier and speakers as the Hidden Earth equipment is held in the Wessex stores. All we had to provide was ourselves and a laptop loaded with the presentation and videos.


What could possibly go wrong?

Suitably suited and booted we arrived early at the venue but had to run across the carpark through a cloudburst courtesy of storm Brian. The equipment was already in place so we fired up the laptop, connected the video cable and plugged in the amplifier. The projector worked fine but the audio stubbornly refused to work. With the clock ticking relentlessly to the start of the meal it seemed that our 'well-rehearsed' presentation was doomed to failure. With only minutes to spare we diagnosed the problem. The 3.5mm jack plug was not going into the socket on the laptop far enough to make contact and there wasn't a spare lead! Fortunately I had bought a bluetooth speaker so we connected it up and placed a microphone in front of it. The sound wasn't perfect but it looked like the show was back on. Phew! 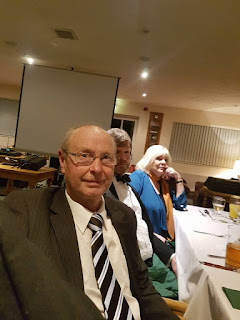 When I said 'well-rehearsed' presentation I may have been slightly embroidering the truth. Cobbled together might have been a more accurate description. During the meal we found out that over the years the great and the good of the caving world had addressed this long established club. The names that every ever knows - The Clive Westlakes, The Martin Farrs, The Sid Perous, The Gavin Newmans and alike, and who are we? Did anyone know us from Adam? To emphasise the point the person to Mark's right during the meal said, "Who is Caver Keith?" - enough said. So to say that we were a little nervous would be an understatement.

At the end of the meal were a number of toasts and then it was down to us.

Mark started with, "During the history of the Wessex Cave Club we understand that you have been addressed by all of the big names in caving."

I replied, "But unfortunately tonight we've got us." It got a small titter from a couple of the audience.

We then played the Potholer Sketch. It's one of my favourite videos and I know that Mark rates it highly too. The odd smile played on a few faces but there were no laughs. It wasn't going well!!!

I then said, "I was introduced to Mark about 8 years ago. I can remember the day vividly. He walked into the windmill like he owned the place and my first impressions were … ". I left a suitable pause and continued with, "What a fat bastard." The place erupted with laughter. Perhaps we were going to be able to pull it off after all.

The exchange of insults continued with Mark slagging off my videos and me slagging off his acting ability. We then played a compilation of video clips entitled "Nah ... He Can't Act" showcasing Mark's acting, starting with the famous Corset video and concluding with the title, A Star Is Born. Having broken the ice with my 'Fat Bastard' remark the bonhomie from the audience continued.

After another exchange of insults we played the third and final video clip compilation entitled "Highlights from the Video Vault" which featured humorous clips of both of us, including Brendan being blown up on the firing range, me stuck in the Lobster Pot, my return to caving following my accident and crashing my drone down Eldon Hole. This elicited laughs in all the right places.

The conclusion revolved around Mark suggesting that it was about time I gave up making videos and me storming off saying that if that was his attitude I was off to find my next 'big star' and shouting, "Les, Les come and be in my videos."

We did get applause, thanks and some very nice comments prompting Mark to post on Facebook, "After dinner presentation with Keith Edwards done and we didn't get lynched or nuffink!"

Would we do it again? Possibly if our egos were massaged enough.

Email ThisBlogThis!Share to TwitterShare to FacebookShare to Pinterest
Labels: Mendips