One of the few advantages of a 10 day shift pattern is the occasional long weekend so when Bob Hall posted on Facebook looking for company for a Thursday caving trip I was able to respond fairly quickly.
The fact that it was a planned trip into Tunnel Cave made it even more attractive. It's a cave I've never visited before so I was quite keen to give it a go, although I was a little nervous. It was to be my first trip underground since picking up a collection of minor, but fairly limiting, injuries over the summer.
Morgan was able to not just get the time off work, but even convinced his boss that it would be a valid part of his CPD, preparing for his Level 2 assessment later in the year.

After a night's heavy rain, it was a comfortably warm and pleasant walk up from the DYO car park to Tunnel Top where, once Bob had wrestled with the lid (note to Fixed Aids, some WD40 needed at Tunnel Top!), Morgan got on with the rigging while Bob and I enjoyed the views. 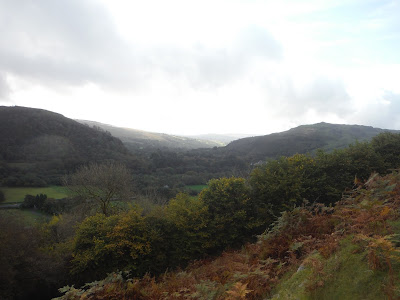 The rigging takes a little while due to the two slightly offset pitches. There's not really a lot of room to hang around at the re-belay so it made more sense to stay up in the sun until Morgan shouted up to say all was ready for us. 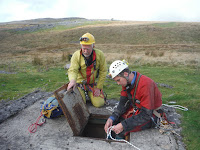 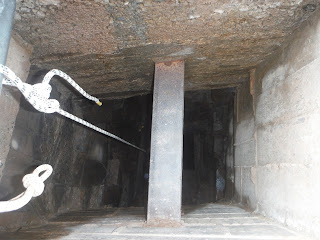 I'd be the first to admit that I don't so enough SRT so I'm not quite as slick on the rope as some. However, I had grabbed a look ad Adrian Fawcets Topo so had a fair idea of what was waiting below. Clipped in, standing on the cross bar I run through my methodical checks. I've managed to mis-thread my stop so it's off the rope, re-thread, re check and off we go. Past the re-belay (no mis threading this time) and the deviation. Then I'm off the rope and waiting with Morgan for Bob to join us. 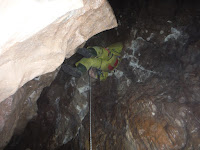 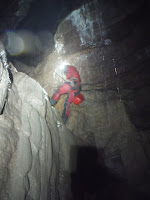 Since we've got SRT kit, it makes sense to keep it on for the exposed traverse. The slope that follows is freeclimbable but, again, we've got our kit on so why make things difficult. There's a fixed line there so it's a simple walk/abseil down 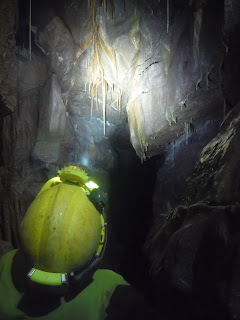 From here on, the cave is pretty much linear. A meandering rift that works its way all the way down to what becomes Cathedral Cave in the DYO showcave complex. Of course, getting there is not quite as simple as that sounds. The rift varies in size at different heights. In places, it's too narrow to pass while, in others, it's wide enough that you end up clinging onto one wall or suddenly finding yourself at the top of an impassable pot. All this means that you move up and down the walls, averaging a downward trend but often climbing up into the roof tube to find the best way on before descending to floor level a few metres later. Since neither Morgan or I had been in the cave before and Bob hadn't been in for 20 years or more, there was a fair bit of backtracking and changing of level as we hunted for the way on. A proper rehab for my recovering shoulder and knee! 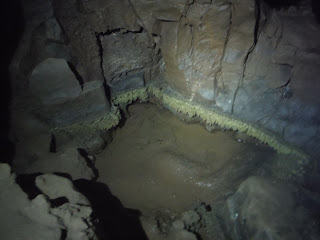 It's not a fantastically well decorated cave (certainly the West Passage isn't) but there are some nice grottoes here and there, all surprisingly well preserved for a cave that's been open for 70 years and effectively has just the one trade route down and back. 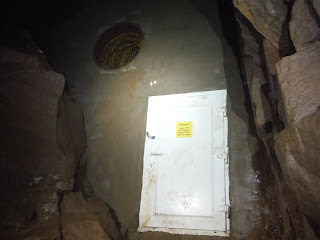 Eventually you reach the end of the "wild cave" you get to the Airlock leading to the show cave. As if suddenly finding a concrete wall with a UPVC door in the middle of the cave isn't odd enough; sitting in the dark, eating flapjack and listening to the strains of Pachelbel's Cannon through the vents is just surreal. 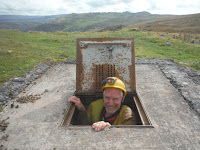 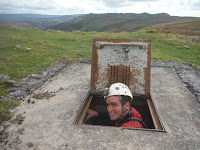 The journey back out of the cave is quite fun. The obvious places to climb and descend the rift aren't quite the same from the opposite direction so, even though it's a linear cave, it's actually possible to take a totally different route to the one you took in. It's also possible to find yourself ( as we did more than once) up in the roof tube, several metres above the way on! Although it's only a short cave, it's quite a good workout. And of course, on a good day, you pop the lid open to one of the best views from a cave entrance anywhere  in Wales. Due to other commitments in the evening, we didn't have time to fully explore so we never went into the East Passage or Cascade Aven extension but, now that I've sorted out concerns over post injury fitness, a revisit is definitely on the cards.