Downpours and dog-legs in Devon

A slow start (caused by a late Friday night and Barbara’s bottle of Baileys) meant we all met up about 10am at the campsite adjacent to the Baker’s pit entrance. Just as we began to change into our gear it started to rain; equally it rained when we returned to the car after the trip. This seemed to set the pattern for the rest of the weekend...

The entrance is an easy climb down two fixed ladders entering a large chamber. 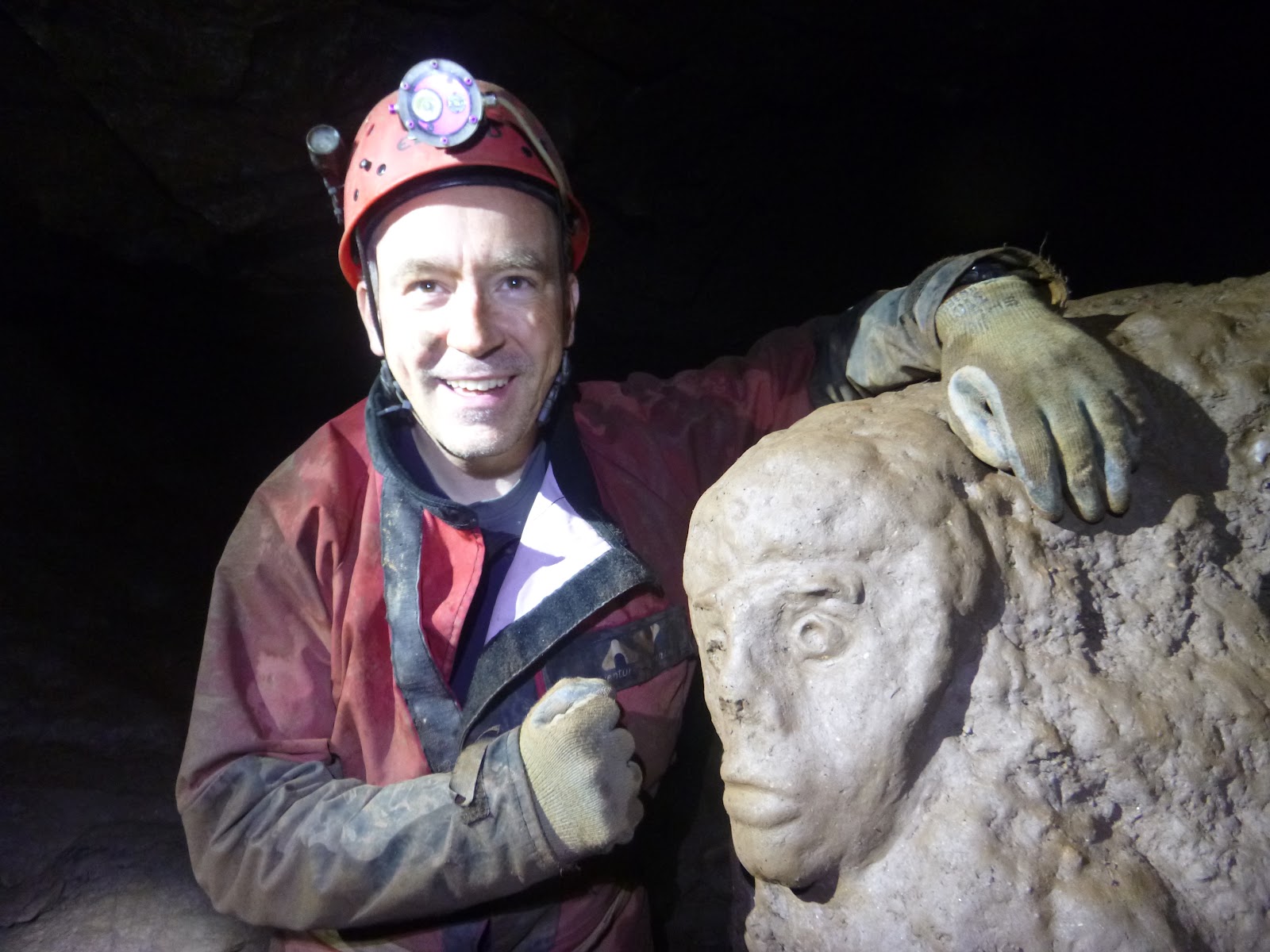 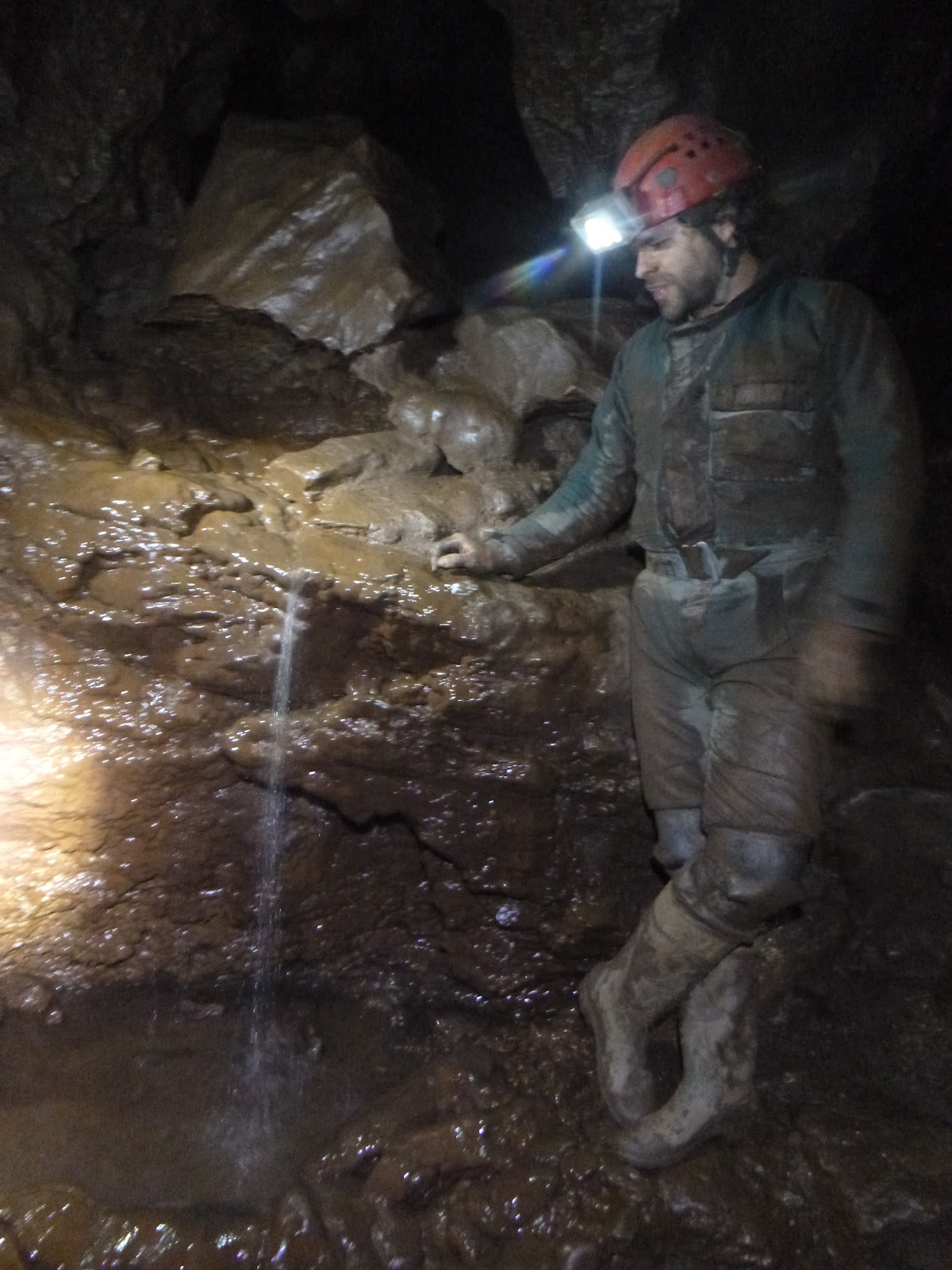 Stuart at the Baker’s Pit ‘waterfall’.

We wandered around following the description, seeking places we had not previously visited. We eventually relocated the start of the Plymouth extension (i.e. we were locationally challenged for a while) and Stuart and Claire forced their way up into it only to decide enough was enough. Kevin and Barbara explored nearer the entrance whilst the rest of us explored various leads in the Lower Stream Series. We were all out by about 2pm. Back at the car it started to rain...

The cave description said this was a sporting trip. It did not mention anything about the giant cave spiders that lurked within the entrance and for a fair way into the cave as well. I would have taken a photo of them, but they were big enough to take the camera from me, so I declined and stealthily snuck past.

Most of what you need to know about Afton before visiting it can be learned from the name (apart from the spiders). It is located near the village of Afton, has a lot of red mud and it is predominantly a rift (i.e. it has less floor to stand on than is comfortable). The caving starts off fairly innocuously, with walking and scrambling over boulders, then holes start to appear in the floor. No problem at first, you just step over them, but then you lose the floor and end up traversing over some fairly high drops, 30-40 feet probably. Not too bad to begin with, but then the walls start to bell out and things get smooth and nice handholds and footholds get fewer. I was very glad to get around one particularly slippery corner and see floor ahead. Before the next section of traversing, that is. But the worst was behind us, and we soon found ourselves sliding down to Flower Chamber (apparently so-called because there were formations resembling gypsum flowers here originally). We then negotiated 2 small down-climbs and a traverse over a fairly deep hole to end up in Cascade Chamber. There was some nice red flowstone here. Fairly soon after leaving this chamber I crawled forward to come face first with a 3m drop and, in a very ladylike fashion, allowed Stuart to go first. He made it look easy, with no need to use the sling. I made it look much less elegant and found that the sling we had placed on a tiny stal that looked like it was going to pull off any second, was actually not going anywhere at all and needed me to climb part way back up to remove it. We were then in Mud Hall and on our way to finding Watkins Squeeze and the climb back up the rift. The squeeze was fine, just annoyingly uphill, and then it changed in to more of a chimney. At the top of this, we found it was time to start the climb up. Thankfully, this was far easier than we had been anticipating and I even enjoyed it.

The cave description we were following was very good and apart from 2 small route-finding mistakes, we were able to complete the round trip in around 1.5 hours. A great sporting trip, and I’d probably go back again when I’ve had enough time to forget about the spiders, the slippery corner and the awkward climb.

After walking around Buckfastleigh looking for somewhere to eat that could fit us in, we found room at The Globe and had a great meal there. 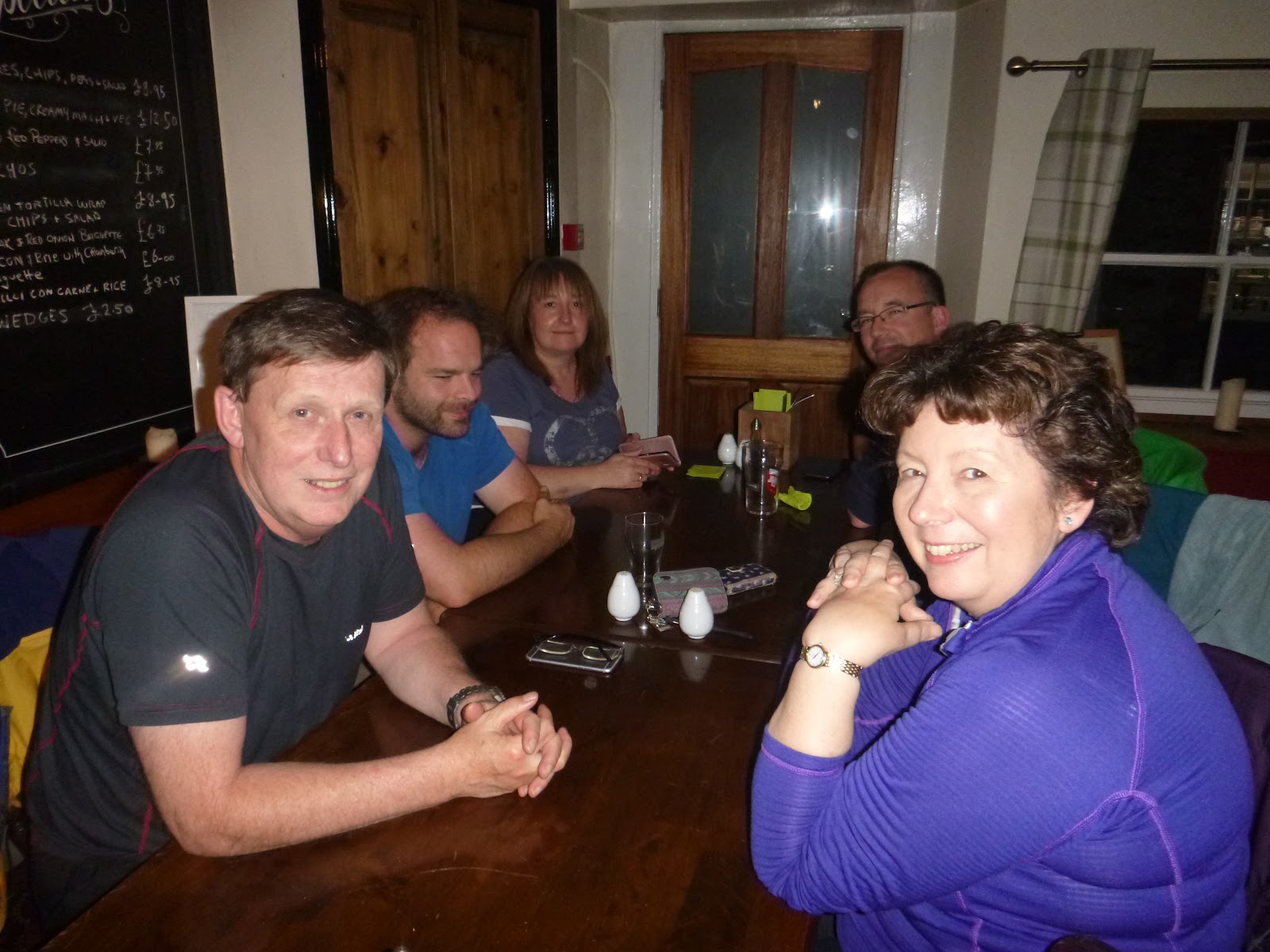 The team enjoy a meal out. 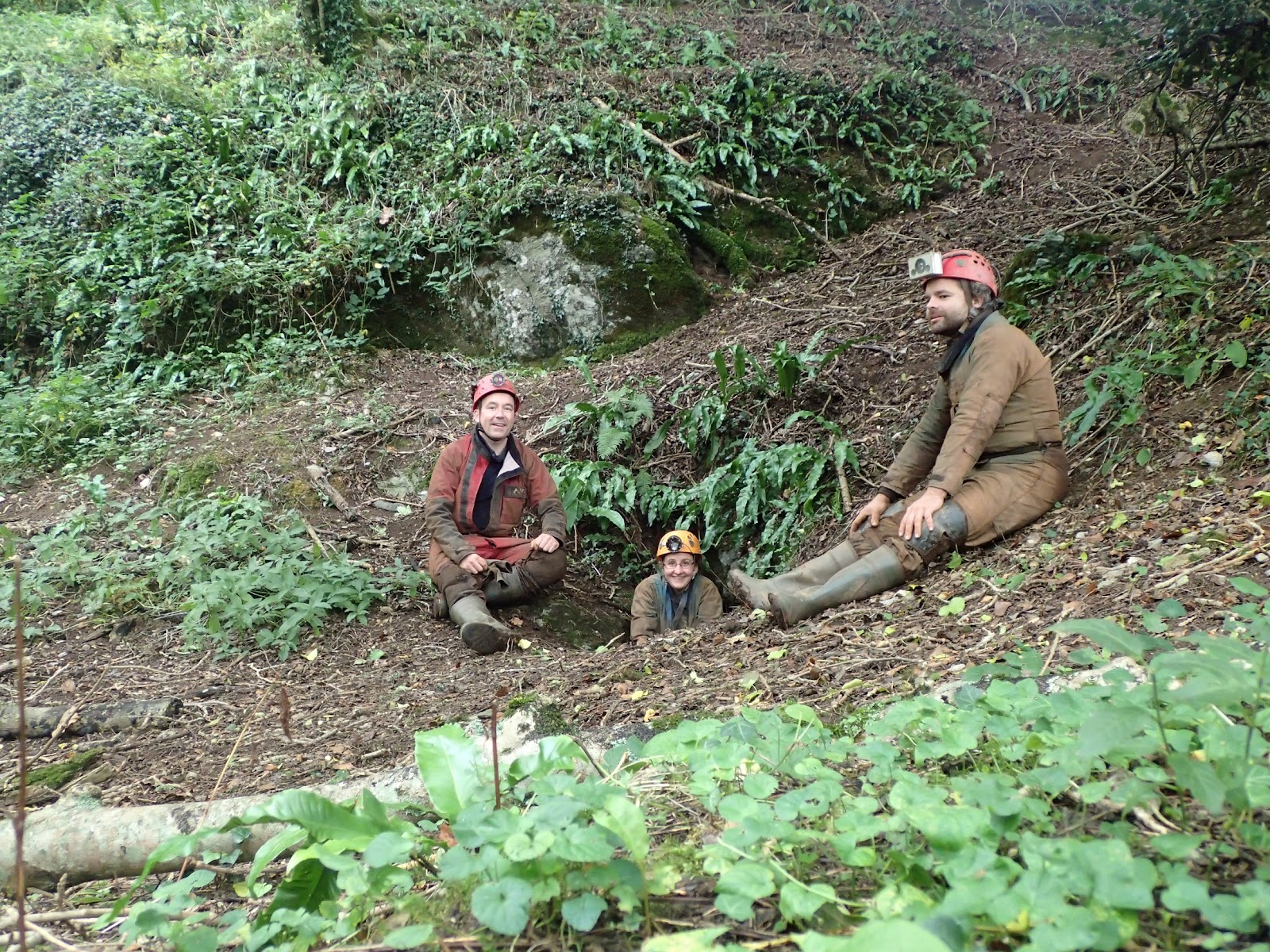 Duncan, Claire and Stuart at the entrance of Dog Hole, a short distance from the larger Pridhamsleigh cavern

This was only going to be a short trip. Around 30 minutes, we thought. Well, it didn’t quite end up that way. The key to the Dog Hole extensions was included in the DSS cave key pack. We figured that it must be worth a visit. Things began well. The gate was located and opened fairly quickly, then Claire went through first. On the other side of the gate, it was immediately in to a tight right-angled bend. Hmm. The others may enjoy this I thought. Then as if that wasn’t enough fun, it was followed by a tight downward sloping tube. I tackled this head first and it was small, but doable. A second downward sloping small tube was next, but then everything opened out into a small chamber with a slot in the floor and a passage coming off on the far side. I poked around exploring a bit while Stuart and Duncan negotiated the Dog-Leg and tubes, but did not come across the spectacular formations I was expecting.

Stuart soon joined me and we waited for Duncan. After a while when he did not emerge, I went back up and found that he was having a bit of trouble [ understatement of the year ] with the right-angled bend. He had come through it, not liked the look of the body-sized tube and had turned around to go back. The bend was not easy to negotiate in the opposite direction and he was forced to take his welly off to get his foot close to getting around the corner. Any taller than Duncan, and you will probably find yourself having to get your leg amputated to get through! 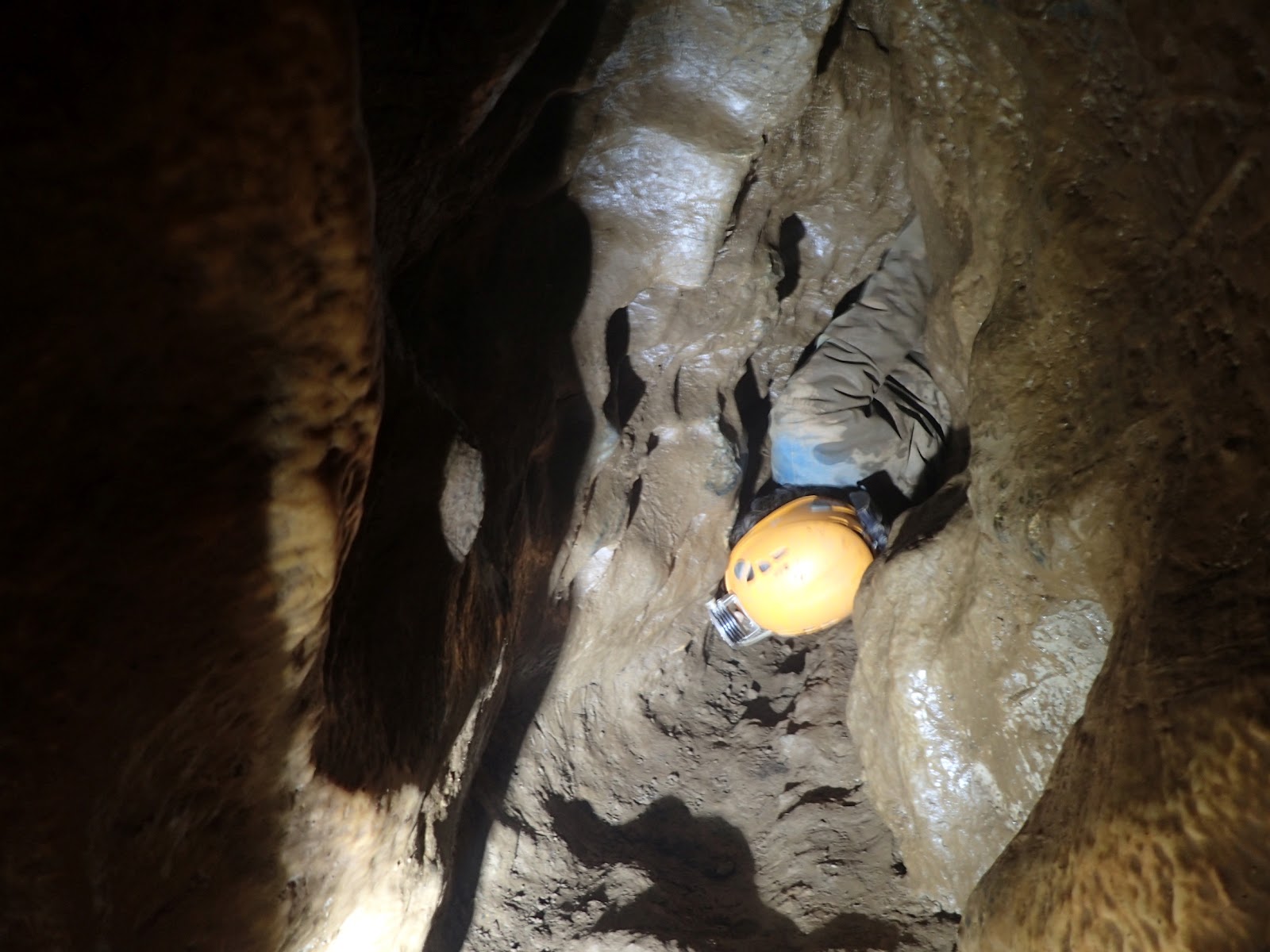 Claire exiting the right-angle bend at the start of the dog leg extension...

The tube wasn’t easy to come back up either! It was easy to slide down, but coming back up with arms above your head, there was little room to move and very little to hold on to within reach, so I inched up that for what felt like several minutes. Finally getting out of the tube, I helped Duncan get his foot around the corner and then exited the extension. Duncan was well and truly wedged in the bend, discovering his right femur was too long to get round the bend. Twisting his bootless foot and pushing forwards enabled him to slowly force himself around the bend. Stuart was behind me enjoying coming back up the tube but made short work of the bend. 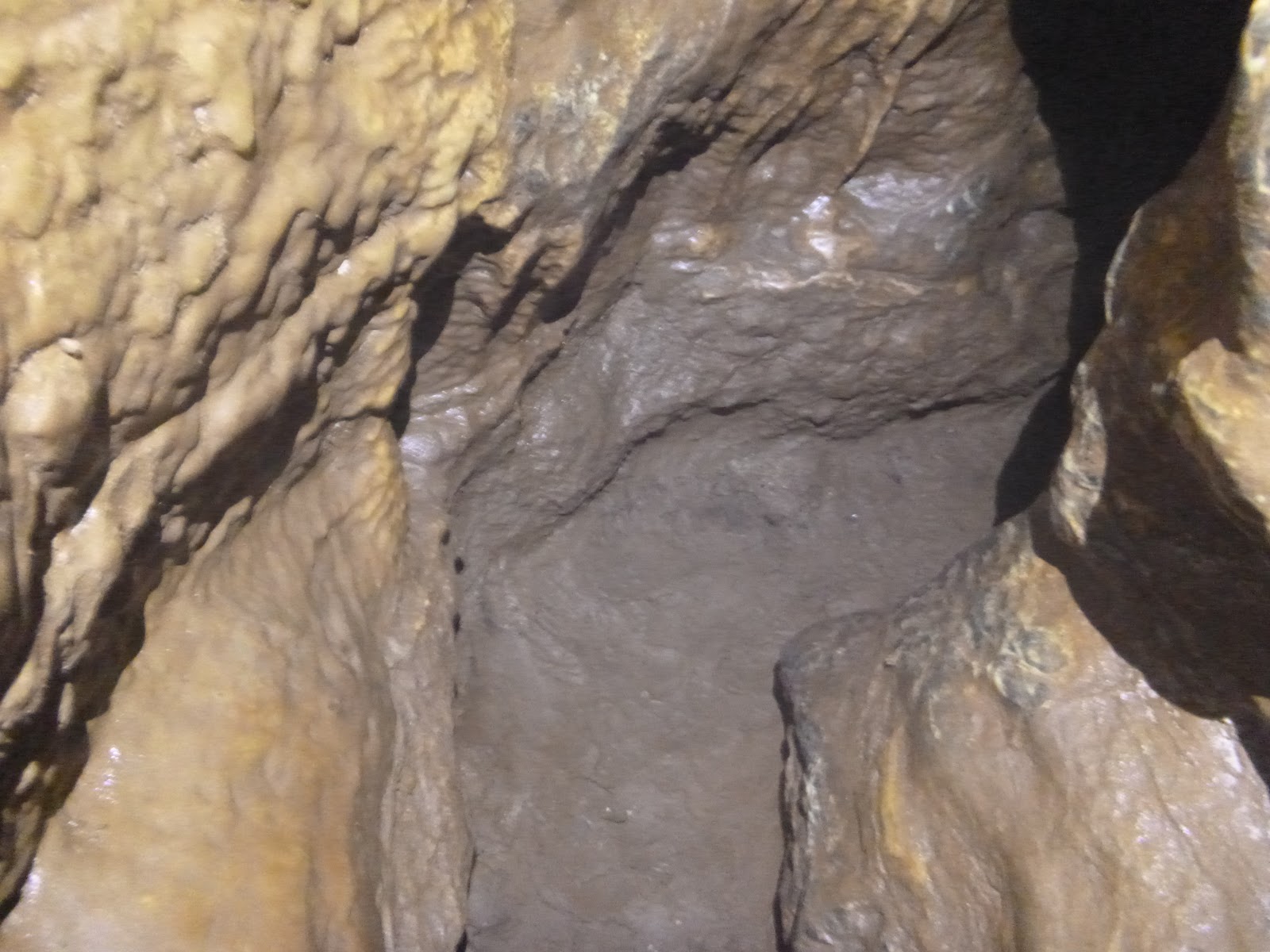 The dreaded dog-leg bend! (Looking back out towards the exit)

Duncan - Whilst trapped in the bend I became aware of a regular thudding sound, I stopped panicking and started wondering why Claire and Stuart were thumping rocks, it then dawned upon me it was actually my heart beat I was hearing whilst entombed in this nightmarish bend. If you are taller than 1.71m (my height) think seriously about attempting this extension! 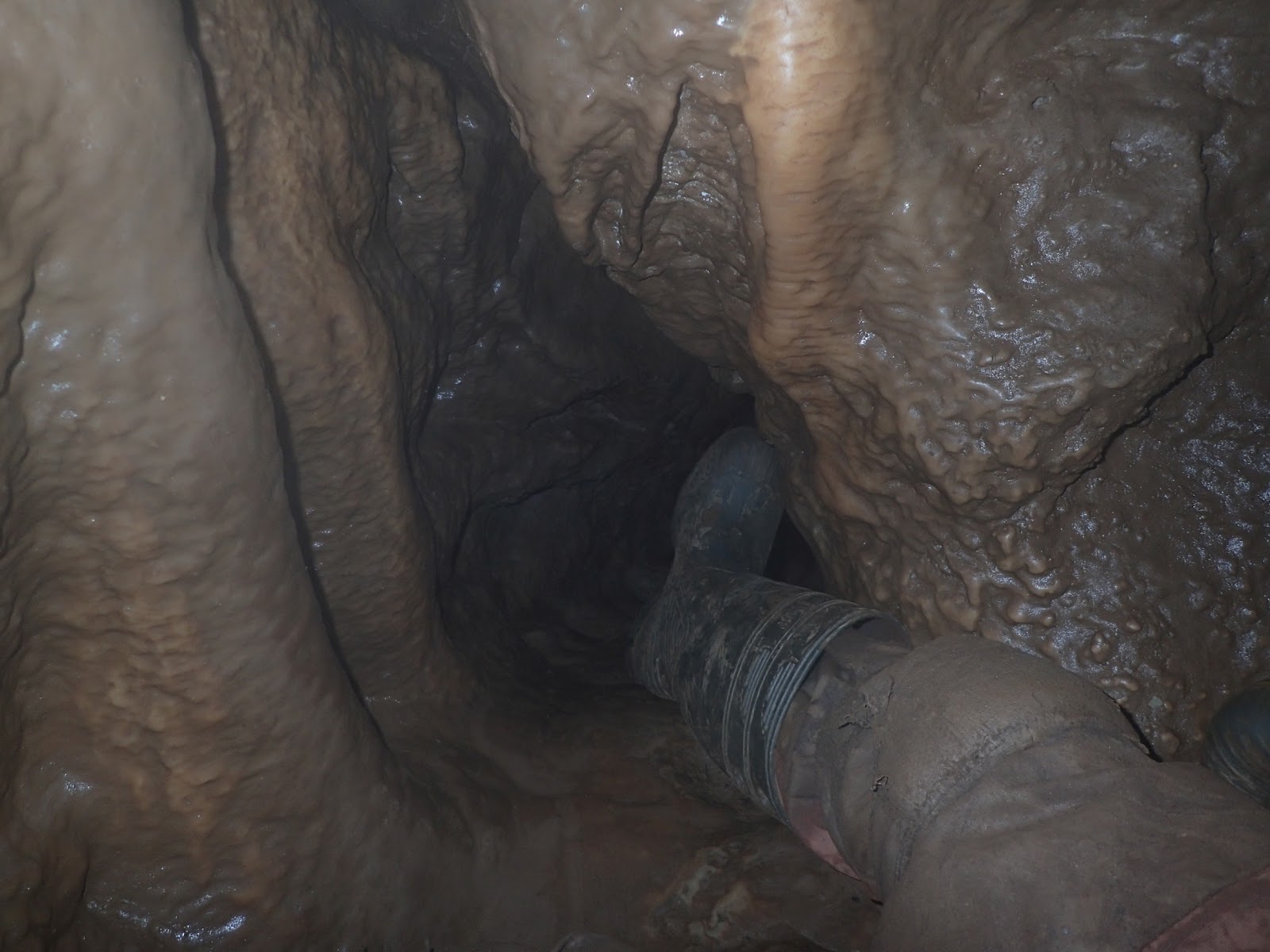 The tube that leads on after the right-angle bend, foot for scale, hmmm quite small…

Having all got out - without finding the fabled formations - we then went on to explore the various other nooks and crannies of Dog Hole before exiting. 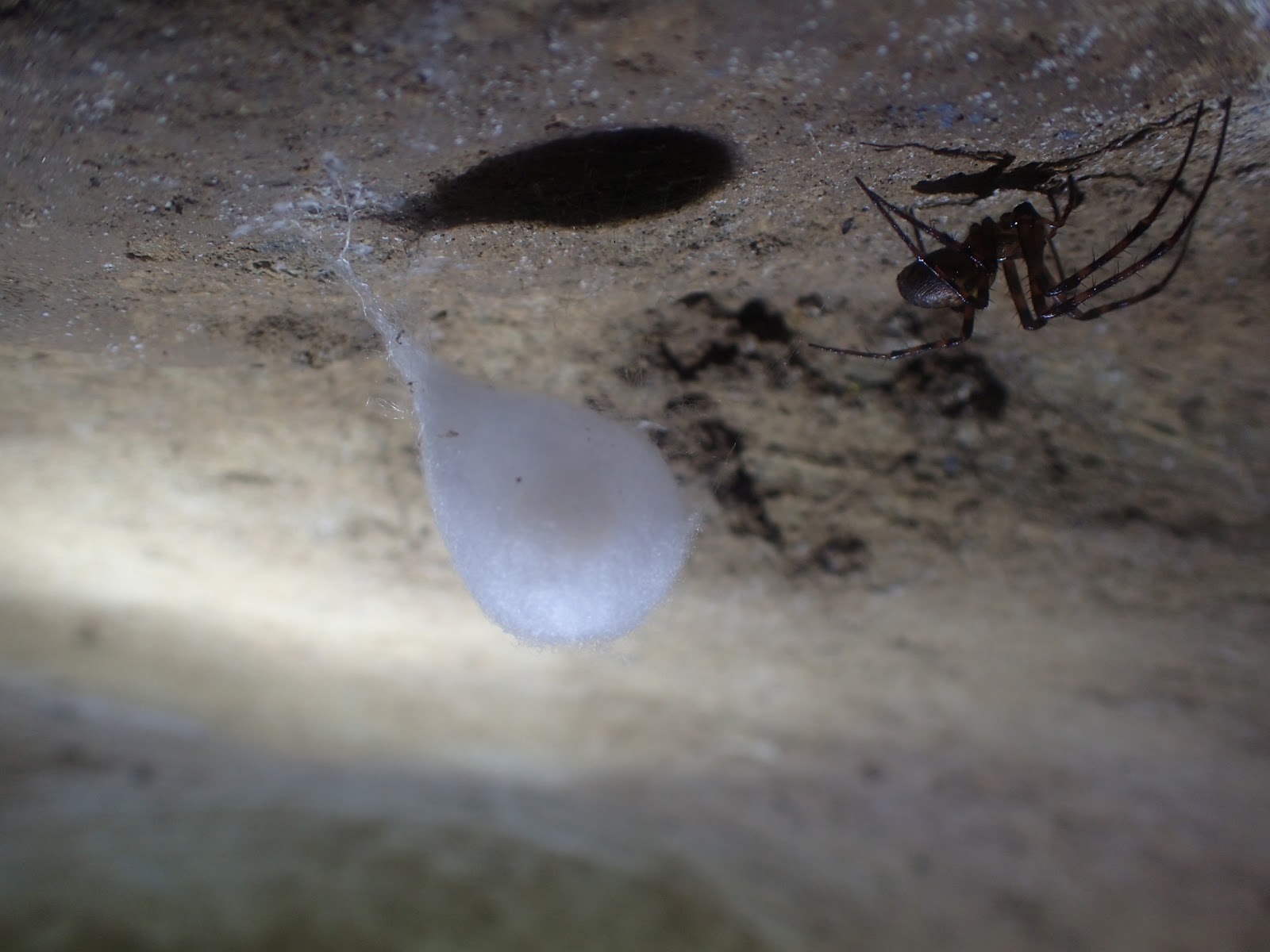 One of several large spiders guarding the entrance of Dog Hole! (tiddlers compared to the Afton ones!) 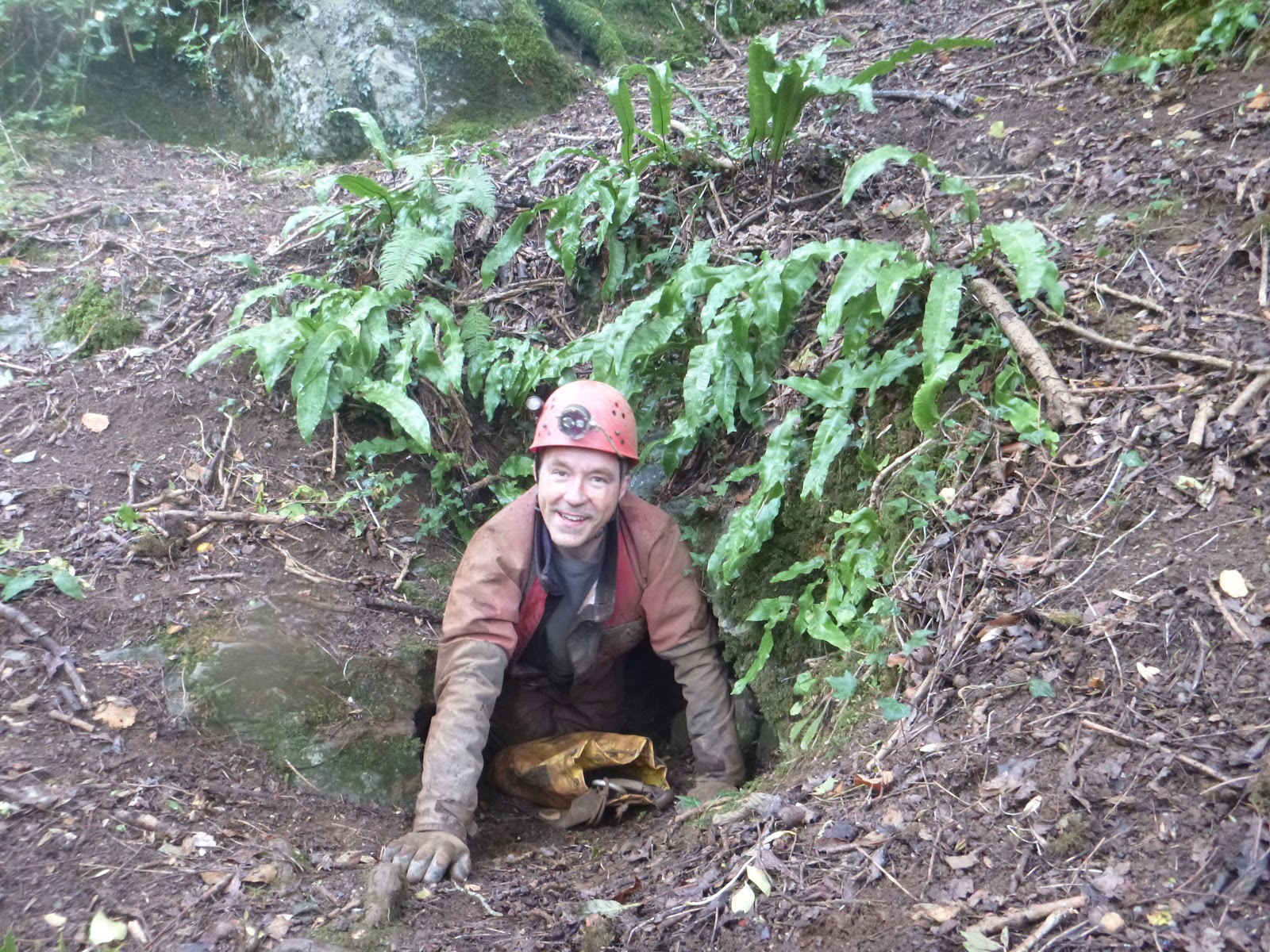 After Dog Hole, Pridhamsleigh Cavern is a 30 second walk away with an impressive entrance. The initial wow factor is quickly replaced by “oh is that the entrance…” a squalid muddy crawl into the system. A phreatic cave system with a maze of passages makes for an interesting navigation exercise. Thankfully Duncan has visited the system many times when he was a student with Exeter University Caving Club and his general compass only let him down a couple of times. 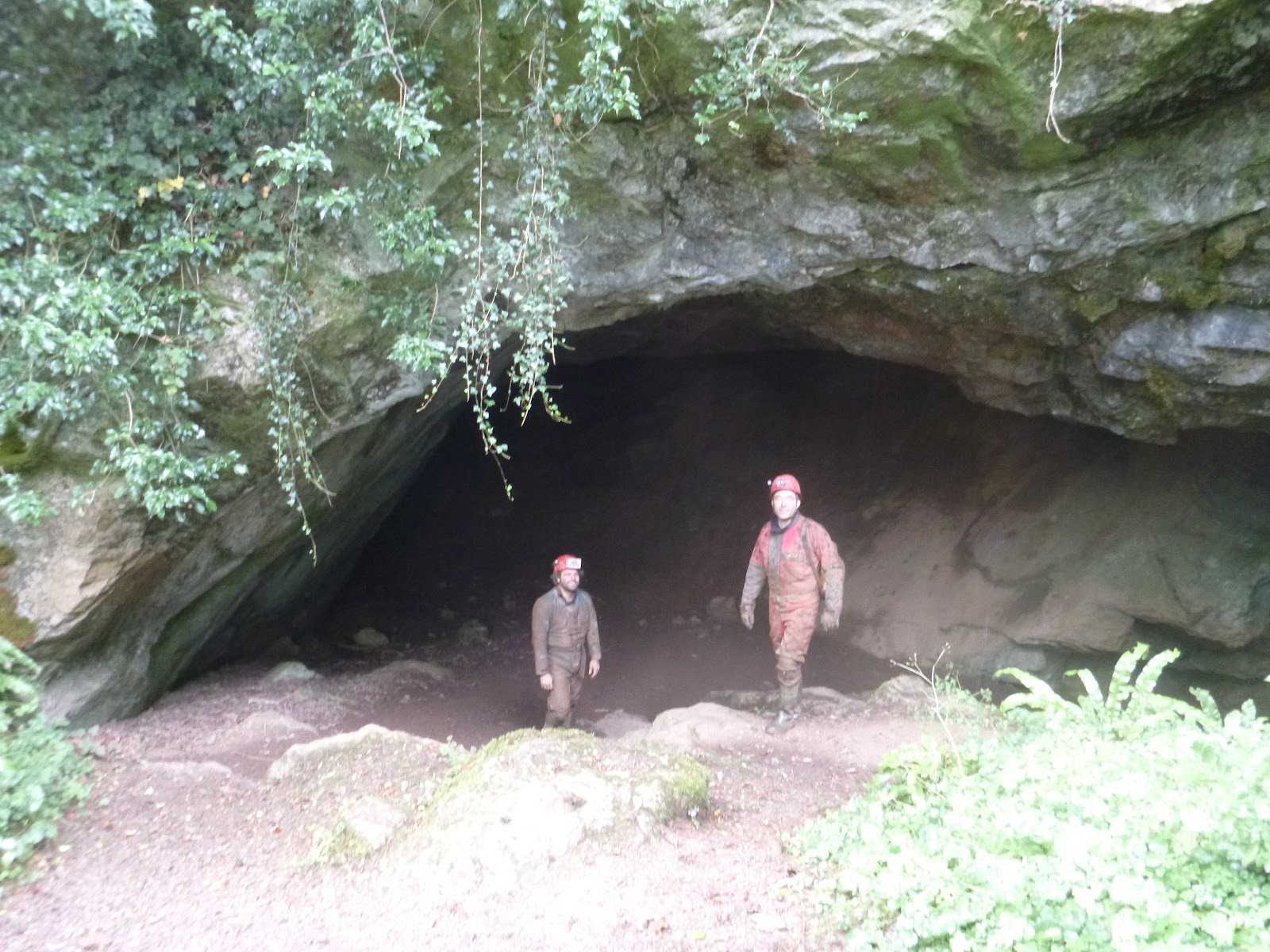 Stuart and Duncan in the entrance to Prid

Pridhamsleigh cavern is a very muddy cave which gets much use from commercial and other novice cavers so there are very few intact formations. You basically visit this cave for the mud! 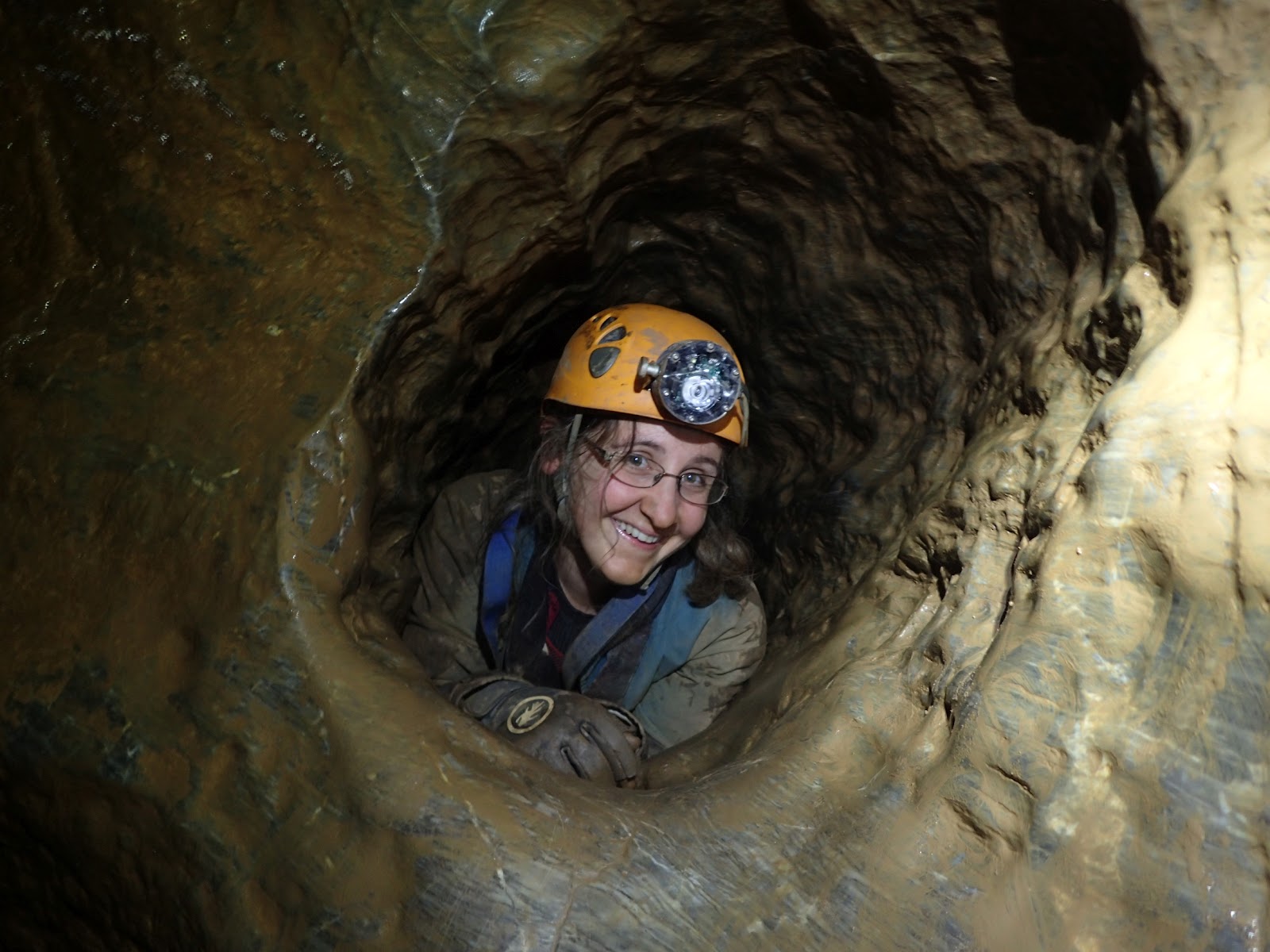 Claire in the “worm hole”, next to the lake.

The end of the system is marked by a deep lake. After a play in the wormhole we exited the system via the coal chute, a “wet way” out back to Bishops Chamber. 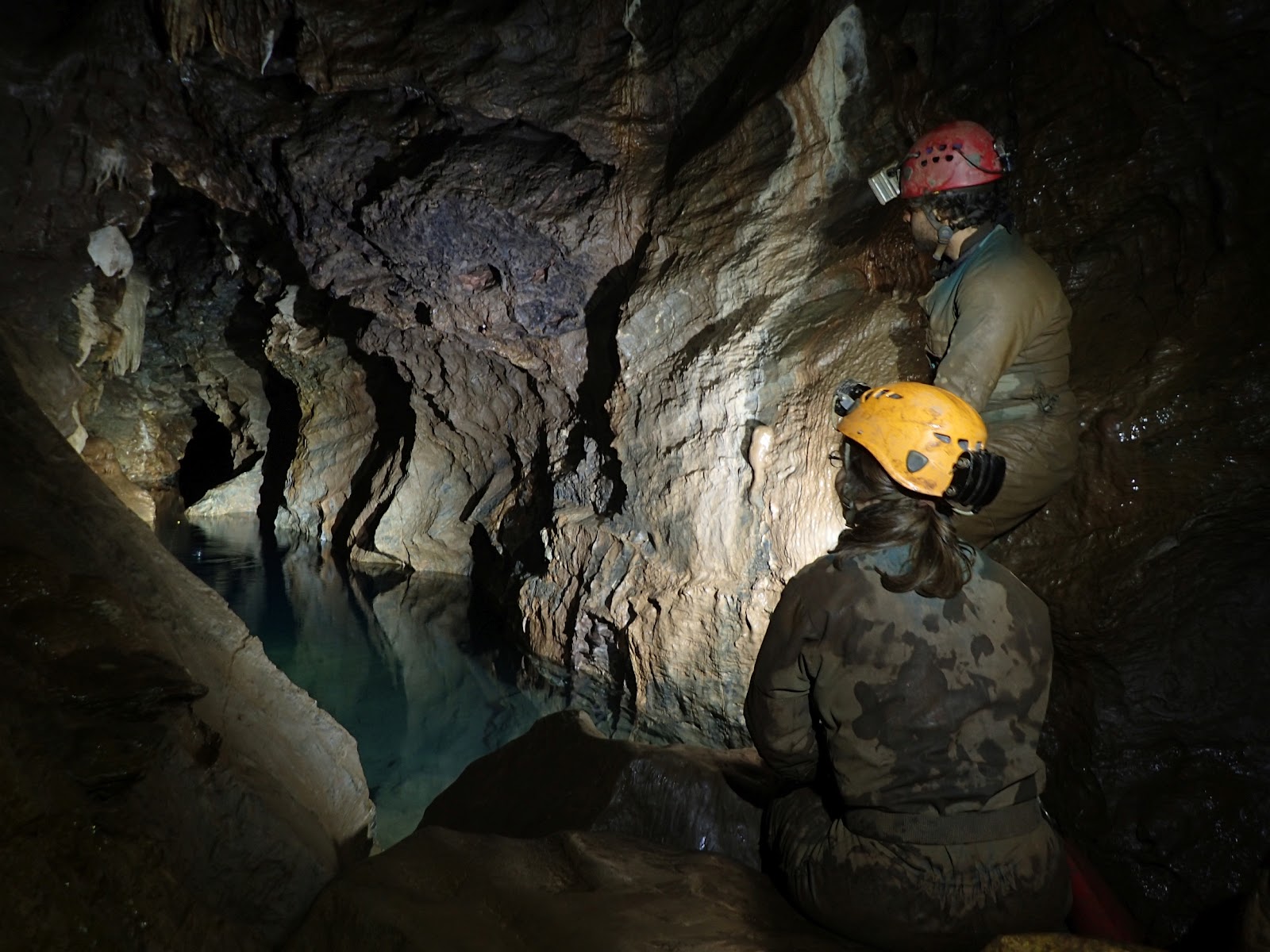 Stuart and Claire at The lake, this marks the end of the cave system, but not the mud…

No visit to Pridhamsleigh Cavern should go without a quick dip in the nearby stream to wash your gear. Might be cold but saves covering everything else with mud. On schedule it started to rain as we changed... 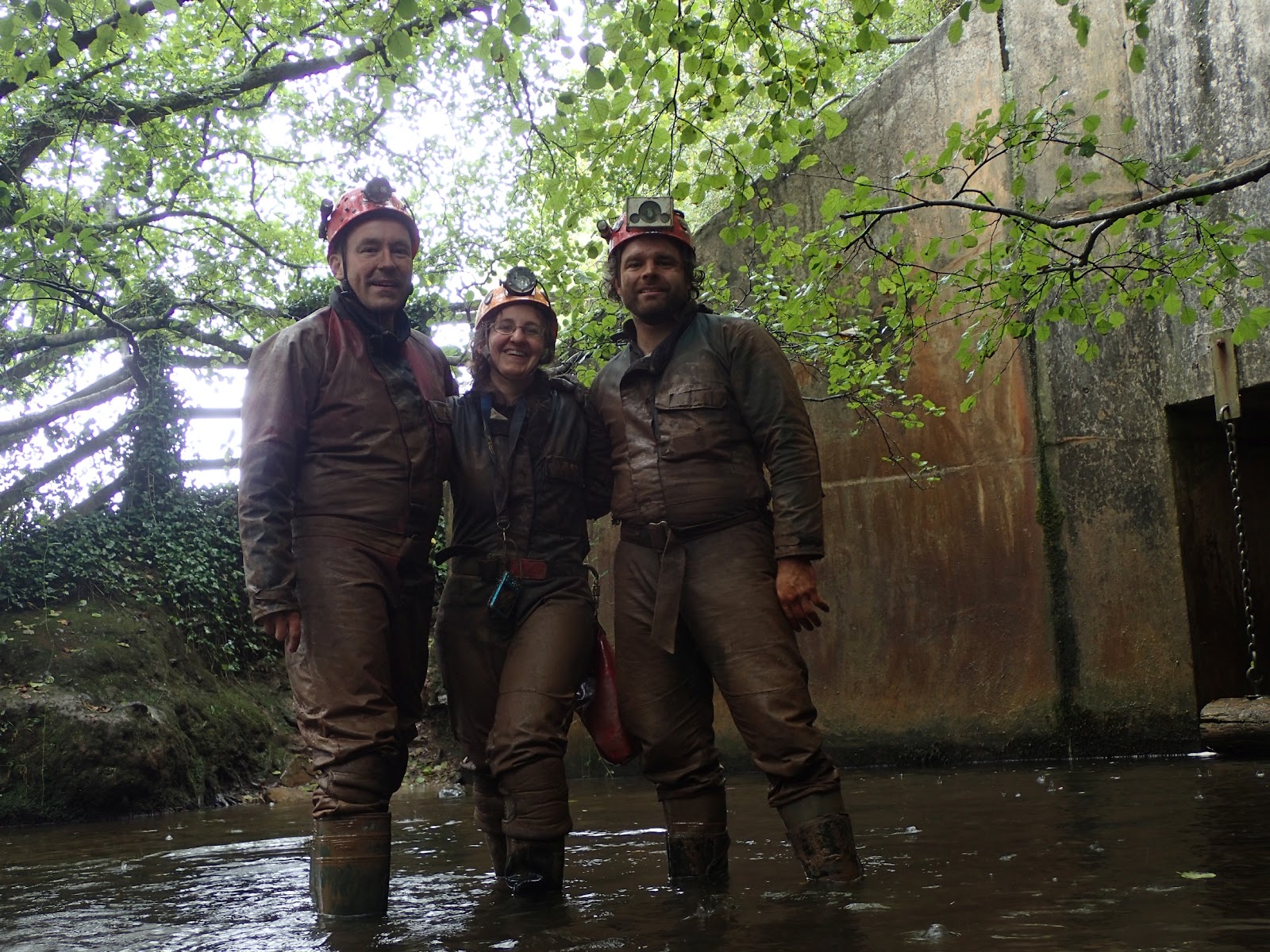 The traditional end of trip washing the mud off in the nearby stream.