This is a report for an Upper Flood Swallet trip on 6.8.16 written by SWCC provisional member, Chris Taylor. The full team were: Celestine Crabbe, Kevin Speight (MCG), Chris Taylor and Phill Thomas. All caving photos are by Phill.

After a few trips in the Streamway and Top Entrance at OFD, I was starting to feel a change of scene might be nice, maybe more of a challenge. In hindsight the phrase 'be careful what you wish for', comes to mind when I received a kind invite to visit Upper Flood Swallet a few weeks back.  I recall packing my gear the night before with the same excitement a small child might feel if leaving a mince pie out for Santa on Christmas Eve. On the morning of the trip I bounded excitedly downstairs at 6:00am to a cool and dewy August morning.

Fast forward to about 8:30am and after some rendezvous miscommunication, I'd met up with Phill and Celestine, and we were well on our way along the M4.  Phill's SatNav impressively guided us through the West Country until we arrived at MCG where our guide, Kevin, was waiting.  Shortly after arriving, we're changed, and walking down the dirt track and towards the modest little hatch covering the entrance to Upper Flood - at this point I've noticed that everyone else has double kneepads, elbow pads and gloves - I was starting to feel my single pair of kneepads might be a bit inadequate. Kevin had unlocked the padlock and down we went one by one, then scurrying downwards and onwards through Upper Flood Passage, with plenty of hands and knees crawling across rubble. After a final fairly narrow crawl we emerged into Midnight Chamber which contained a fine array of flows, stal and long straws. Kevin was fairly eager to press on, and much of the inward trip would consist of me gawping at what I considered were breathtaking formations, while Kev would assure me that the best was yet to come and it would be all worth the effort to see Neverland.  I held that thought in mind, particularly while wriggling through a long flat, and wet section aptly named The Lavatory - a 50 metre wet crawl.


Then began 'the' boulder choke. Even in my limited caving experience I have heard of this choke.  A few really uncomfortable twists and turns later - that I knew it be bloody well feeling bad the following morning - and we arrived in a small chamber, where I remarked "well, that wasn't so bad, just a bit awkward". With a smile our leader informed me we had got the first bit out of the way, and there was plenty to go, but afterall, it was going to be well worth it.  I can recall around 11 particular sections to the choke that were not individually difficult, but strung together, they do eventually become an endurance test.

Eventually Kevin announced we had arrived at the old entrance to Neverland. Apparently it was taped off to protect the formations, and a bypass was dug.  Anticipation was now running high among the group.  Eventually after one final push through a gloriously muddy crawl - I let gravity do the work at that point - we arrived at a small chamber containing  a shallow pool.  Next to the pool were a small bucket and a brush, and it was here that we were advised to remove our oversuits and wellies to avoid spoiling the formations.  It felt criminal walking through a crystal pool and hearing the faint 'crunches' under our feet as we took extra care to walk on already damaged parts of the floor, but there was no other way on.  As we turned right and walked up the flows into a large chamber, pure white flows, curtains and stal surrounded us.  Everywhere I looked, the walls and floor glistened yellow-white.  I've struggled to write this piece, as a written description does not do Neverland justice and neither do photographs really, the passage has to be seen to be experienced.  Further up the top of the flow, a low passage contains a pool and the Pork Pies - large blobs of pure white calcite shaped just as their name implies. 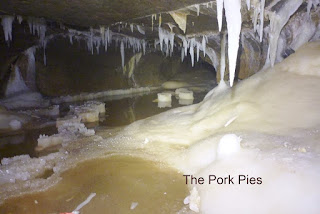 After we had wandered around all that was not taped off, Kevin managed to persuade us to make the return trip back by reminding us of the Hawaiian night barbecue that was in preparation above us. The return trip was a very tiring one, and I think we all found the 'upward' journey through the boulder choke a very different beast. Eventually I got my second wind after receiving a facefull of muddy water reminding me that I was part way through The Lavatory. Blindly stumbling along the entrance passage and up the hatch, I fell on to the grass, and lay in the sunshine while I recovered. Upper Flood is a strenuous cave with plenty of challenges, sharp edges and pebbles that take their toll. It really is another level up from the well travelled passage of OFD and has the feel of virgin cave.