Via Ferrata in the Dolomites

Lel Davies and Iain Miller were also with us in spirit; Iain had broken his shoulder a couple of weeks before the trip and so, since they had planned to drive out, both were unable to come.

Several of us had wanted a club via Ferrata trip for the past two years but due to other commitments and a range of other factors, this had not happened. This summer, however, we did it! We spent a week in the Dolomites. 2 of us (Helen and Claire) stayed at Camping Rocchetta on the outskirts of Cortina d'Ampezzo and the remaining 9 had a villa near Valle di Cadore, around 30 minutes drive away. Some of us flew out for the trip whilst others took more time and drove out and visited the Black Forest and the Boden See on the way out and Chamonix and Mont Blanc on the way back. Although the less said about the 1 1/2hr queue on the Italian border for a €2 toll fee the better...

So, what is 'via ferrata'? These are routes across the mountains equipped with metal wires, stemples and ladders. Using a harness and VF lanyard (like elasticated cowstails) you can clip in and traverse these paths and take in some spectacular scenery along the way. VF is a leisure activity now, and some routes have been made in recent years solely for recreational purposes, but it has its origins in war. The Italians and Austrians fought on the summits and passes of these mountains during the First World War. The wires were installed to assist the movement of troops and supplies across the mountains.


The weather was on our side for most of the trip as the thunderstorms tended to only happen overnight and in the late afternoon after we had finished our day’s activities. The rest of the time, shorts and t-shirt weather was in order. Tim and Andrea were the most experienced via ferratists among us. Of the rest of us, most had either never tried it before, or only been on one route. We therefore started the week with two easy routes, Giovanni Barbara (1A) and Lucio Dalaiti (1A). This was a pleasant walk which included a few short sections of via ferrata, nothing scary, and a good place to learn to use and trust kit. The setting was very pretty, and there was an impressive waterfall which the route passed beneath the mid section.

To make the most of the route Tim, Tony, Helen, Owen, Luke and I went around it again and took a different, steeper, walking route back to the car park. This provided a great view of the entire waterfall, whereas before we had only been able to see individual sections. We met up with the rest of the group as they were cooling off and paddling in the river. Here is Tim's video of the Giovanni Barbara/ Dalaiti http://www.youtube.com/watch?v=ZzpuYRRTZNc 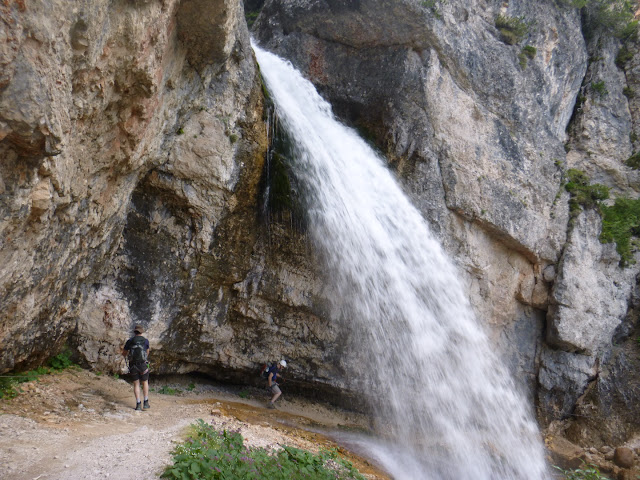 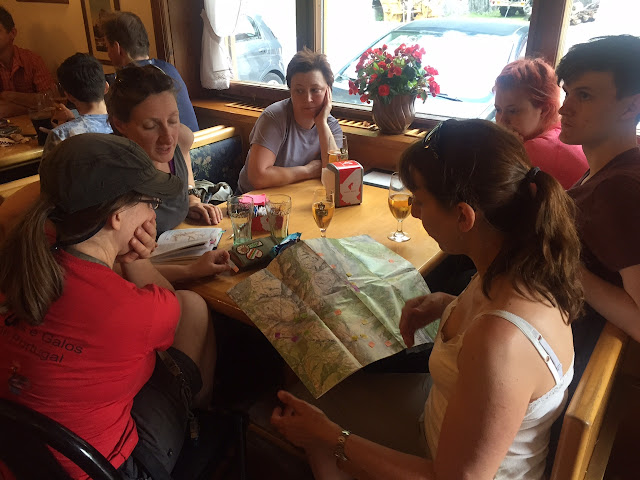 A walk (Sasso di Stria at  Passo di Falzarego) and a visit to the Lagazuoi Tunnels were on the cards for the Monday. The beauty of the scenery is marred by the remnants of war. It is certainly sobering to find yourself walking in First World War trenches and it is impossible not to think about all the lives lost in that place. How cold, desolate and inhospitable it must have been during the winter months when temperatures plummeted. 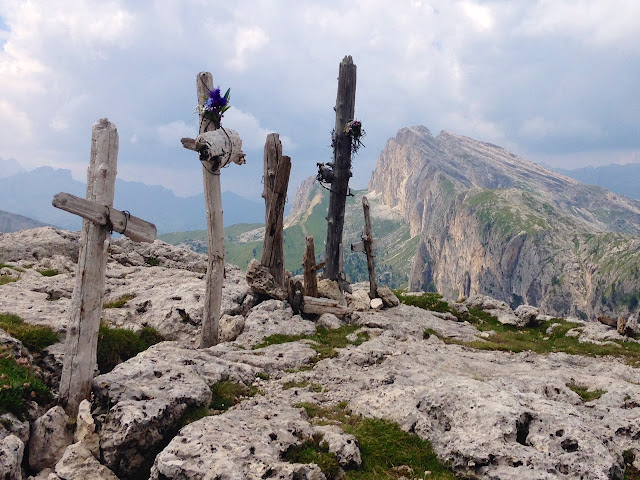 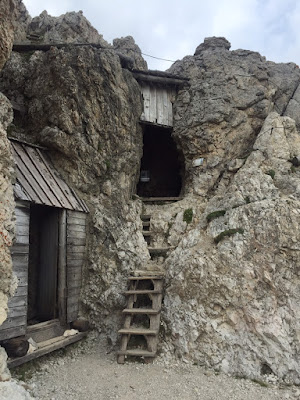 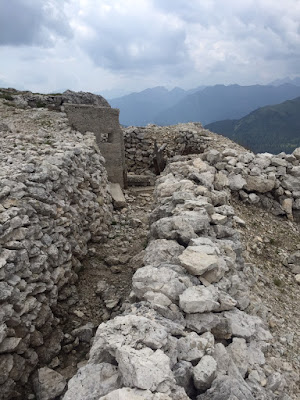 The afternoon saw us move on to the Lagazuoi Tunnels. War was fought on and inside Mount Lagazuoi. A network of tunnels was dug by both sides within the mountain. The Austrians held the mountaintop and initially the Italians began digging to dislodge them. The Austrians then began to dig counter tunnels. Some of the tunnels within the mountain were to place mines under enemy positions, some were for firing or observation, others for access and some to counter enemy tunnels. In June 1917 33,000kg of explosives were detonated by the Italians in an effort to well and truly dislodge the Austrians. The resulting explosion blew the smaller peak off the mountain, but did not have a substantial impact on Austrian forces. Access is only granted to a small proportion of the tunnels in the mountain, yet even this is incredible (and fairly strenuous at times) and it is easy to spend 2 hours walking through the tunnels before exiting and walking down the outside of the mountain. We then headed off for a pizza in Cortina.


The next day saw us trying another via ferrata. This time is was VF Lamon (2B) beginning on Tofana di Mezzo and ending on Tofano di Dentro, accessible by cablecar from Cortina. The views were incredible from the start and it was a fun route that was harder on the reverse (uphill). Quite a few people watched us stepping over the safety barriers and on to the VF and looked at us like we were crazy, so it was a bit like the looks given by customers at Dan yr Ogof when you pass them to leave the showcave behind. Definitely to be recommended. In the evening we headed over to the group villa for some food. See here for Tim's video: https://www.youtube.com/watch?v=FWVlX4yLgTw

Wednesday was a rest and shopping day for some of the party, but Tim, Tony, Owen, Helen, Glen, Luke and Claire decided to do another VF route. This time it was a bit of a step up to VF Col dei Bos (3B) which started at Bar Strobel near Passo de Falzerego. From the start it was clear this was a more difficult route. It was a fairly new VF (2007) that had been set up as a training route for the Italian military and it had the first vertical sections we had tried. I found these challenging at times and frequently cheated by standing on the connectors joining the wire to the rock; just starting the route was a bit of a struggle. Helen decided to sit out the route after a couple of vertical sections and Tony hurt his knee and had to leave the VF by a tortuous route, then waited for us on the walker's path. This route also saw the first bit of bad weather during an ascent. When we were just over half way up, the sky turned black and we were passed by a pair of Italians who were gesticulating wildly at the approaching storm and pointing downwards. Not the best moment. After a quick group discussion, we decided to press onwards and upwards nevertheless and were fortunate that the storm did not reach as far as us, although we did have rain and the rock was nasty and slippery when wet. I, for one, was glad to get to the top of this one. Though it did seem to be unending as 3 times I thought we must be at the summit, before seeing the wire reappear at the end of a short plateau each time. By the time we did reach the top, the weather had cleared completely and the sun was back out. The view was absolutely incredible and was certainly worth the mild moments of panic. Here is Tim's video: https://www.youtube.com/watch?v=ckSWoYWi5kc
Thursday saw us getting excited at heading to our first VF with a bridge in it! Alas, this was not to be. We reached the chairlift and found that the second section, which would have taken us close to the start of the VF, was closed for maintenance. We  could have walked it, but this would have added a couple of extra hours to the trip, however, the walk did not look too inviting and two of our group had picked up a stomach bug and were not feeling good. But seeing as we had spent over 30 minutes driving here, we decided to go up the first section of chairlift anyway. I had never been on a ski lift before, so this was great fun for me. We then had a quick coffee at the top and discussed where to go next. The Cinque Torri area with VF Averau (2A) was selected. This was a short section of VF and a good walk with more excellent views. Here is Tim's video: https://www.youtube.com/watch?v=1pN5o4QqRtg We then watched the classic cars heading through Cortina from a cafe for a while as we waited for the pizzeria to open.

The final day saw us heading over to the highest peak in the Dolomites, Marmolada. We took the cablecar up, walked on the snow and had a short walk outside the visitor centre. Highly recommended. Then it was time for us to go our separate ways. Glen, Wendy and Luke had an early flight, so said their goodbyes then. Tony, Grainee, Caitlin and Owen had a monster drive across Germany and France, so went to rest up. Helen and I took more of a leisurely pace (Helen was doing all the driving) and went back via Lake Como and Mont Blanc (amazing cable car ride to Helbronner), whilst Tim, Andrea and Rhys headed to Venice before catching their flight home.  Thanks for organising such a great trip Andrea!

Email ThisBlogThis!Share to TwitterShare to FacebookShare to Pinterest
Labels: Dolomites, Italy, Via Ferrata