Getting knotted in Yorkshire, 5-6 September


The weekend did not begin very promisingly. What Phil, Kate and I anticipated being a 5 1/2 hour drive to Yorkshire turned in to a 9 hour epic. The traffic on the M5 and M6 conspired to prevent a timely arrival and was stop-start most of the way. But it was a sunny and warm day, the good weather made us feel better, and we had plenty of time for some increasingly competitive 'car spotting' games as the minutes ticked by, with cries of 'mini', 'yellow car' or 'horsebox' soon being heard to pass the time. Rain found us within the last 20 minutes of the journey and we managed to miss some knot tying tips by arriving late at the hut (Hardraw Old School Bunkhouse). But things improved quickly after this. We soon ended up heading out for a drink at the Green Dragon, which was a whole 2 minutes’ walk away, where local ales and cider were sampled. With most of the group having had journeys in excess of 6 hours to get here, we found ourselves tired pretty early and bed was at a barely respectable, midnight. The 6am door slamming of the group of cyclists also staying at the hut (how many times do 6 people need to walk through and slam the same door within a 2hour period??? It turns out, the answer is actually more than I care to remember…) served as an early wake-up call.

We met at 9am to split in to two groups for the weekend. Those who had prior rigging experience (Duncan, Chrissie and Emma) and those who had none (Phil and Claire). The plan for today was an exchange trip in Sell Gill. The advanced group would rig the Goblin route and the beginners would rig Fossil Passage and then each group would de-rig the other’s handiwork. But first there was time for some knot practice. Since SRT hadn’t come naturally to me (I spent years dreading having to use any of it) I was actually surprised to have volunteered to go on a rigging course at all, no matter how basic. Having a complete repertoire of knots that essentially began and ended with an overhand knot, meant that it would be an uphill struggle from the word go for me.

We headed over to the cave and met up with the first group, as the two enterances are very close to one another. It was a gloriously sunny day and the walk in, along part of the Pennine Way, was short and enjoyable. Being more experienced at SRT than Phil, it was my turn to go first and attempt to rig the entrance pitch of Sell Gill's Fossil route. Duncan and Emma from the other group came over to watch (Chrissie was hard at work rigging part of Goblin under Andy's watchful eye). 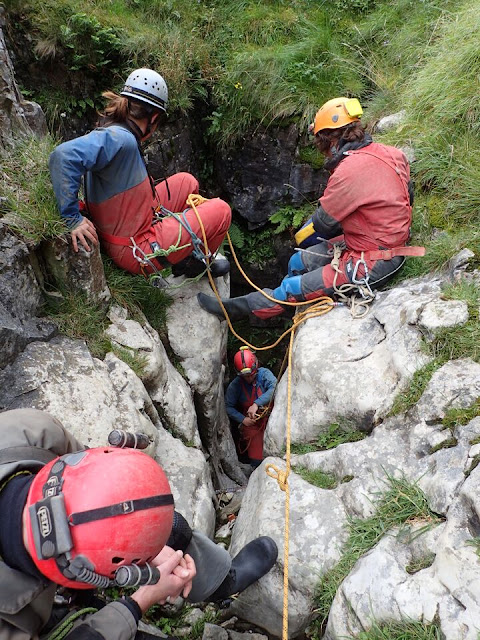 Claire attempting to rig the Y hang
After a couple of attempts at rigging the y-hang, it was there, and we all went down to the traverse to the second pitch. More new knots were needed here, alpine butterflys this time. We took it in turns to rig both the left hand and right hand traverses. For some bizarre reason I found it easier to rig the traverse on the right hand wall, though had fewer problems with the y-hang there, which involved a bold step to complete. It was at this point that Duncan and Emma returned to the surface and set off to rig Goblin. Phil, in the meantime, had no problems whatsoever with any of the knots and speedily completed his traverse. It was then time for some basic SRT practice, so we did a mid-rope changeover from abseil to prusik, to remind ourselves. Unusually, I managed to do this with no problems, whilst the set up of Phil's kit made it difficult for him to complete this manouever, but some quick advice and improvisation from Helen ensured that it all ended well.
So, on to the third pitch. We had a quick lunch stop here before we began. I set up the first part of this - narrowly avoiding standing on one frog and rescuing another frog from attempting a leap in to oblivion - and Phil rigged the Y hang. There were no problems, and we could already hear the other group at the bottom of the pitch waiting for us. After quick hellos and tales of terrifying bedding plane crawl pitch exits and monster y-hangs were exchanged, we moved off and began our ascent of the Goblin route. As Phil was going to de-rig the first section of this, I headed up 2nd. It was a fairly long pitch with 2 rebelays, but nothing technically difficult. Helen waited at the top of the pitch to ensure Phil was happy about de-rigging the rebelays (which would involve a bit of a swing). The next pitch was straightforward, and it was here that I saw the huge Y hang the other group had referred to  - which must have involved some precarious balancing to rig! But I soon found myself at the fabled bedding plane crawl. I would be de-rigging from here upwards, so I had a short wait for Helen and Phil to pass me and then headed off. It looked like an intimidating exit, but I soon found that it wasn't as bad as it looked and managed to turn sideways, slide out of the bedding plane and onto my cowstails then and untie the p-hanger there without swinging very much. It was then on to a bit of a slippery and slightly awkward traverse around a corner and the final climb out where a handline was useful as the climb was slippery, and emerged in to bright sunshine. Altogether, it had been a great day and we strolled back to the cars. Total trip time: 5.5 hours. The evening saw a return trip to the Green Dragon for us, with excellent food.

A slightly later start (9.30am) was in order for Sunday and there was no door-slamming chorus to wake us up this time either. The plan for today was that the groups would go to separate caves. Helen would take Duncan, Chrissie and Emma on a pull-through trip in to Simpson's Pot and Andy, Phil and myself would head off to Bull Pot (after we had dropped Kate off in Ingleton for a day of mooching around and eating cake) and rig the first 3 pitches. I rigged the entrance pitch (I think it will be a long time before I get a bowline correct the first time...) which had my first deviation (that I did manage the first time) and then went down to look for the start of the traverse. Andy had to point out the start of the traverse to me as I couldn't spot it very easily. I then I set off with my alpine butterflys, which I managed to get right this time. The drop below was only a short one, but I still felt rather precarious reaching across to the p-bolts. The second pitch Y hang here was rigged by Phil and it led to a slight pendulum on to a ledge where there was a choice of routes for the third pitch (slot pitch and gulley pitch). I rigged the Slot and Phil did the Gulley. The Slot had a 'handy' puddle of water at the top, which mysteriously kept finding it's way down my neck as I attempted to rig the rebelay... Phil's knot and rigging skills are excellent so he had no difficulty whatsoever in rigging his pitch (tip: if you want someone to rig something, out of the two of us, ask Phil). I had 'fun' trying to get the rope length right to rig the gigantic Y hang required for the pitch. We then heading down our respective pitches and swapped over to ascend and de-rigg the other's work. The length of the rebelay loop on my pitch was fine, but the knot... We then derigged and Andy showed us some rescue techniques on how to assist a tired caver on pitches 1 and 2.

Being as all this only took around 3.5 hours we then headed to our second cave of the day, Valley Entrance. For more practice I rigged the traverse and pitch in to the river (got the Y hang on the second attempt). Then we headed upstream to the waterfall pitch where we thought we might be in time to meet the other group. With no sign of the others after waiting around a while we headed back out and managed to make it back to Ingleton to pick up Kate by 4.30pm, which was just in time for some cake shopping. I later found out that the others did not exit the cave until 5.30pm. They had a fantastic time in Simpsons and called the pull through trip the gem of the weekend. Al in all it was a very worthwhile weekend. Thanks Helen and Andy for all your time and effort! We greatly appreciate it. I promise to keep up my knot tying practice! But don't test me on a bowline too soon . . .
Posted by Claire V