The last time I had camped in North Wales with the club, we could have made more use of a dinghy than a tent. The rain rarely stopped for more than a few minutes and the poor weather ensured a failed attempt at summitting Snowdon by 2 of the group, thanks to the gusts of wind which were periodically knocking them off their feet. That had been two years ago in August. It was August now. So it was with this in mind that I packed my tent, waterproofs, shorts, sun cream and wellies. Afterall, summer time in North Wales, who knows which way it will go?


Following an uneventful drive up we found the campsite, Corn Bwch, near St. Asaph and Andy, Antonia and myself set up camp. It wasn’t raining, the tent didn’t fly away like a kite when I put it up and the site was not a mud bath. This certainly boded well for the weekend. Saturday dawned bright and clear, if a little chilly, but no rain!! So off we set to sample some climbs of the area. The Dyserth Castle slab was the closest and therefore our first port of call. 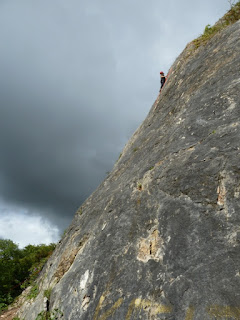 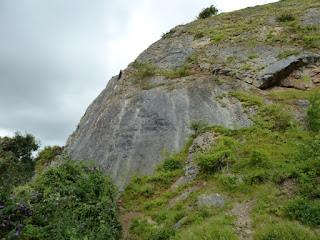 
Andy and Antonia are much better climbers than I am so they shot off leading up 6a routes, just to warm up. I followed on a top rope. We did 4 routes each in the quarry, the hardest being a 6b+ which even I managed to get up somehow and without too much swearing, though I doubt it looked anywhere near as elegant as Andy and Antonia’s smooth climbing style. 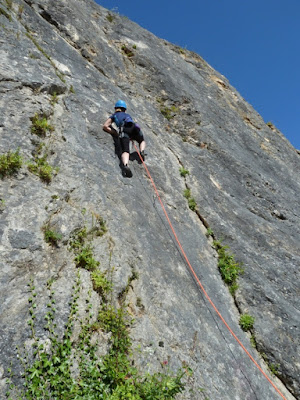 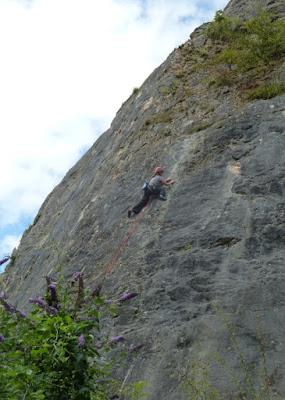 Contrary to my first suspicions, the smooth slab that looked totally hand and foothold free from the ground did actually have some friction when you were on it. I also managed to do my first outdoor lead climb on the slab here. It was only a 5 (Jason and the Aga Nuts), and I didn’t kill myself or anyone else in the process, so we shall judge it a success. We climbed at Dyserth for around 3 hours then had a quick lunch. With a whole afternoon still to go we headed to Castle Inn quarry for more climbing routes, passing the pretty Rhuddlan Castle on the way.
With the shortest possible walk in (the car park is at the base of the climb), more routes were accomplished at Castle Inn. Where we had been the only climbers at Dyserth, Castle Inn was packed with people, including a group from Plas y Brenin. Andy and Antonia completed even harder, longer, routes here with the most difficult being a 6c. They were only stopped by Andy’s new climbing shoes which were attempting to amputate his toe. I was content with top roping a 5, leading a 4+, belaying and then playing with a dog in the car park. When we returned to the campsite Harvey had just arrived and Pete was only a few minutes away. We had dinner out at the nearby Farmer’s Arms, which was in the middle of nowhere yet had some of the best pub food I’ve had in a long while. With the temperature getting cooler and cooler the 5 of us headed back to the campsite. The skies were clear; it was going to be a chilly night! I started out in basic pyjamas, yet, after waking up shivering at 3am, by the end of the night I also wore my thermal base layers, caving undersuit and walking socks. But at least it still wasn’t raining... 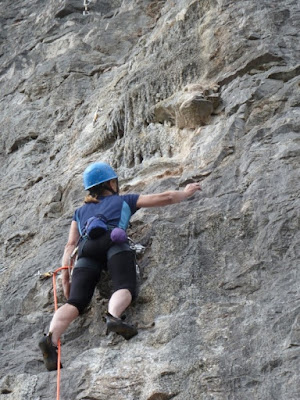 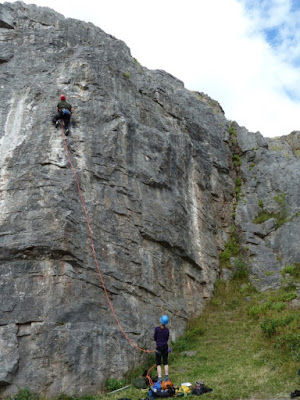 We had arranged to meet our Milwr Tunnel leaders, Nick and Graham, at 10am at a quarry a short drive away. Unusually, we ended up arriving early and being ready with plenty of time to spare. We were also met by the rest of the SWCC clan. Vince, Kim and Paul had decided to drive up from South Wales for the day, instead of camping. They has set out at the ungodly hour of 6am, and spotted a drunk driver swerving from side to side of the road on the way up, they called the police and waited while they arrived to arrest him. So they had already had an exciting day and all I’d done so far was have breakfast. Yet, the trip itself would soon make all their excitement from the early morning drive pale in to insignificance. For those unfamiliar with the area, Milwr Tunnel is a 10 mile long drainage tunnel that runs from sea level at Bagillt, through the Halkyn Mountain to Cadole, near Mold. The tunnelling began in 1897 and the tunnel was completed by 1957. Milwr drains over 50 lead veins above and has a labyrinth of over 60 miles of interconnected passageways. It is an impressive place with an equally impressive history (check out Cris Ebbs’ book) and access is controlled by the friendly and enthusiastic Grosvenor Caving Club.  ﻿﻿

The original point of entry to the Milwr Tunnel, was the Olwyn Goch shaft. This was 400 ft deep laddered shaft. However, in recent years it had become unstable but, thanks to considerable effort on the part of Grosvenor CC, a new entrance was uncovered and dug out nearby. Following a short crawl inside the entrance we began our descent of the 23 ladders. Echoes of ‘ladder free’ resounded around the shaft and there were platforms and walking sections in between the ladders which made them easier to handle, with the longest ladder being around 30m. Down and down we descended, our guides sharing their knowledge of the tunnel and surrounding lead mine as we went. We finally reached the bottom of the entry shaft, turned left and began to walk on the tracks heading down the Milwr Tunnel itself towards the Powell’s Lode Cavern. There is a drainage channel running down the left-hand side of the tunnel and this contains fast flowing, yet incredibly clear, water. The line is laid on timbers and at times the water covers the tracks. We turned right at a branch line and headed towards Powell’s Lode Cavern. The massive lake that exists in this chamber is incredible. The water is clear – apparently there are freshwater eels in there, but we did not see any on the day – and the lake is very DEEP, reportedly diveable and around 200ft deep. Nick told us that for many years spoil had been tipped in to the lake and this had no affect whatsoever on the water level! The chamber was lit up for us with the aid of a generator and it looked amazing! It proved to be a great place to stop for lunch.


Following our short rest break we headed back to the base of the shaft. I, for one, thought this was going to be the end of our trip. I was pleasantly surprised to find, that this was only the end of the first half of the trip! We would now go on to view the very impressive chambers where Pilkington Glass quarried limestone. Our first stop was to see an immense chamber that had only recently been discovered in the limestone workings and had been lit up specially for our visit. We climbed up on to a balcony to take in the full size of the chamber and then walked to look at some drip pits nearby. An extended exploration of the limestone workings then took place and included a chance to walk across the famous limestone bridge there. At the end of the limestone workings is a scramble up backfill. We climbed up this to look back down the tunnel and it was only really here that the scale of the place became truly apparent.


The return journey up the ladders seemed to pass quicker than the trip down. Naturally, Nick, our guide, sped up each of the ladders leaving the rest of us to trudge up at our own pace. Our total trip time had been 7.5 hours. Yet the time had passed quickly and it did not seem anywhere near that long. It had been an excellent trip. I usually prefer mines to caves, but this trip has definitely made it in to my top 10 underground trips and I highly recommend it. Thank you Grosvenor Caving Club! 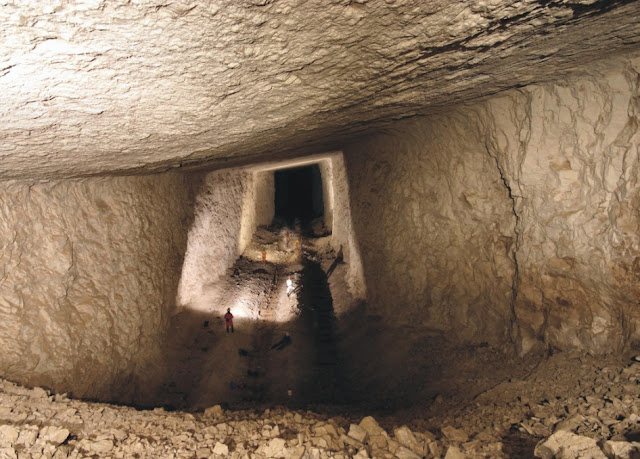