What’s better than arriving late on a Friday night at someone's house looking for keys to local caves? Arriving late on a Friday night and having a glass of homemade cider shoved into your hand then walking out into a garden with a spectacular nighttime view of Chepstow Castle on the banks of the river Wye! This was how Jan Karvik welcomed us, a local key holder for the Forest of Dean caves we had planned to visit. Claire and I drank our cider, marveled at the view and eventually headed off to the Beeches campsite a few miles north to find Iain and Lel huddled in their camper van. With a clear night and a full “blue” moon the campsite took on an almost magical appearance and plummeted to 5°… At midnight we all retired to our respective tents as we could not take the cold any more.

The following day Claire and I met up with John Cliffe at the Apex Outdoor shop North of Coleford, had a quick coffee and headed off to Wet Sink which was a few minutes drive North. John lead the trip from behind to allow Claire and I to learn the route. I rigged the two pitches (we used a 20m & 30m rope) with John providing best practise advice. As a side note the two pitches are beginner friendly with easily accessible pitch heads, so no shaky legs whilst desperately hanging over bottomless pitches. Anyone wishing to learn or improve their rigging skills would find Wet Sink a great cave to hone their skills.

After some cwm dwr style crawling we popped out into the main stream way and headed downstream. We went as far as sump one to have a look then tracked back upstream a short distance and entered Coal Seam passage. The nature of the cave changed and became very dry and dusty. This section seemed to go on for ages with non-stop stooping and crawling. We eventually came to a T junction where I collapsed in a sweaty heap! We rested a while then navigated our way through an area of break down to pop out into another T junction and into the large passage known as the Chunnel. Going left we entered a section known as the three deserts which involved flat out crawling and much overheating! After the three deserts it was at least standing and we eventually made it to the Dog’s grave passage. Walking down this passage you are soon confronted with a sign, beware of the dog! 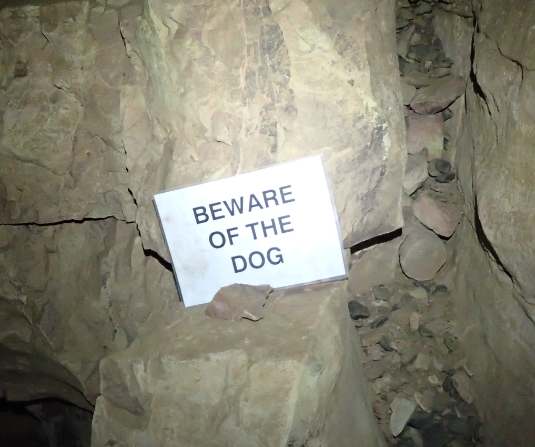 The sign warning you of what’s around the corner

Around the corner is the partially fossilized remains of a dog with it’s lead and rubber chewy! 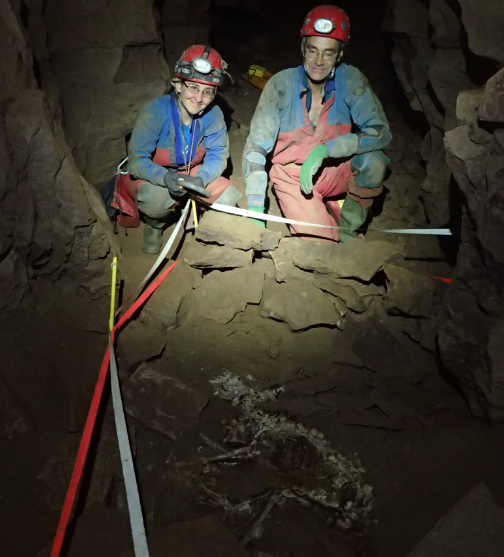 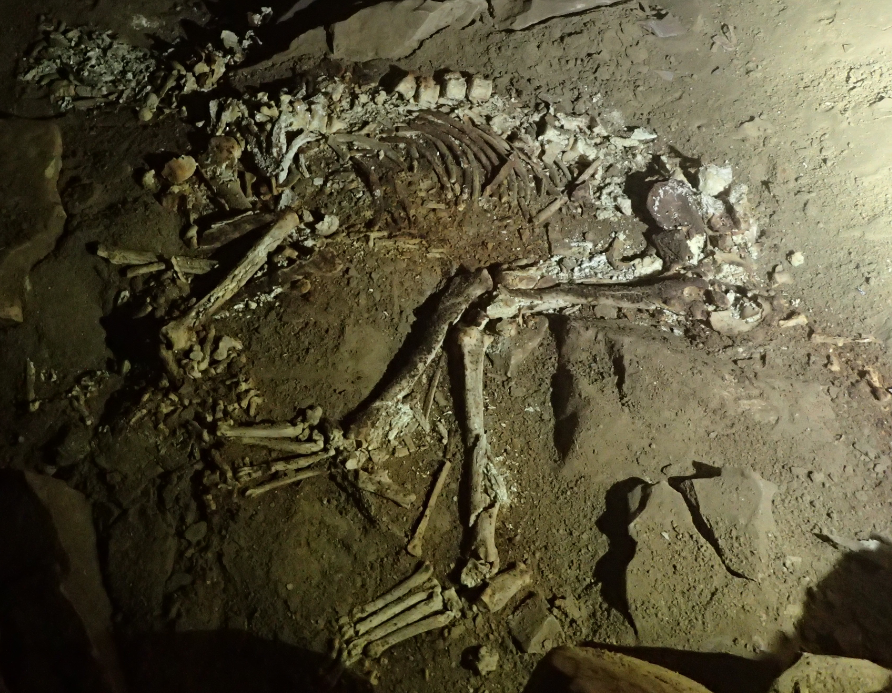 Claire, John and the dog skeleton.


We headed back through the three deserts and continued along the Chunnel, passing the Coal Seam turn off. At the end of the Chunnel the nature of cave changed again becoming wetter and finally some formations (Gnome garden). We then descended a set of wet climbs, followed by some crawling to pop out into the main stream way which we followed downstream eventually returning to the start of our round trip. On the way out Claire de-rigged the pitches. Total trip time 5 hours.

We headed back to the campsite and met up with Lel and Iain. In the evening we all went to The George Inn in St. Briavels. 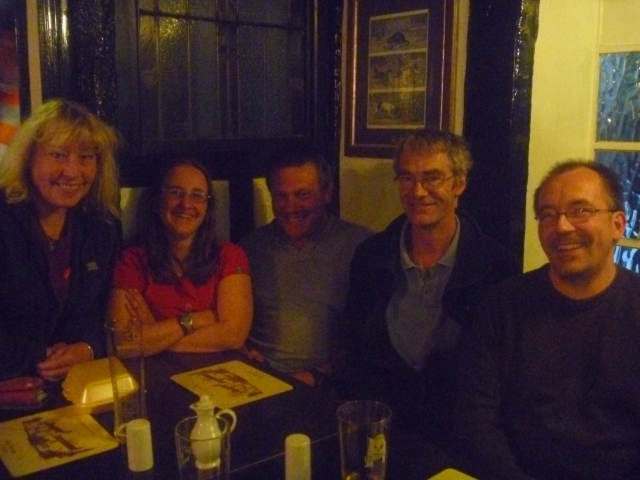 
After the meal John headed home and the rest of us went back to the campsite for another night of cloudless skies, spectacular full moon and a balmy 6°…

On Sunday Paul Taylor (RFDCC) met us at the campsite at 9.30am. After much chatting we left about 10:30 for the cave. 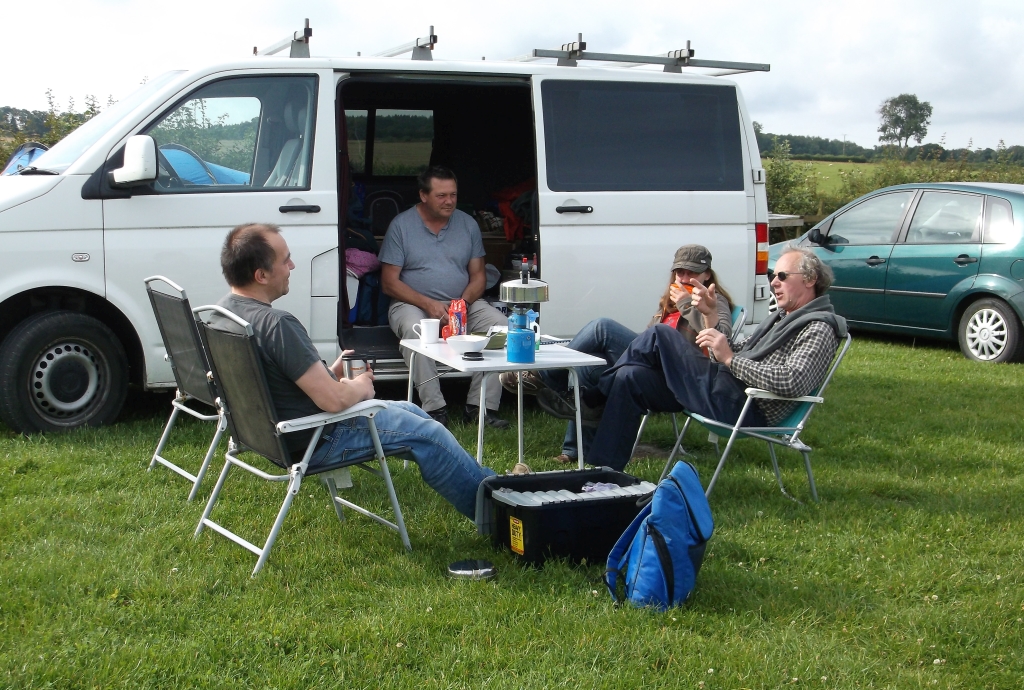 
Iain was planning to come on this trip but had been recovering from a recent shoulder injury and decided not to join. The Miss Grace’s Lane cave is only half a mile from the campsite at an obvious lay-by. The cave is in a dip just over the fence and is a concrete entrance with a 30m fixed ladder. We decided to abseil in which you can rig off the metal frame shown in the image below. 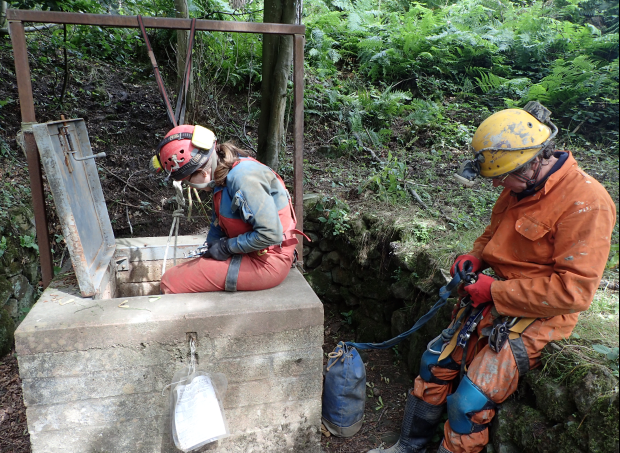 Claire and Paul preparing to abseil the 30m entrance

After the initial entrance there are a couple of fixed ladders with the last requiring you to step off to the side to get into the main cave (Break through chamber).

The cave is dry, dusty and the limestone has a red colour to it. There was lots break down which created a rabbit warren of climbing over or crawling under and I very quickly got disorientated. Thankfully Paul knew exactly where he was at all times. We passed through sizable chambers such as Dome chamber and Nurden Hall. I was overheating whilst Paul and Claire looked unphased.

We passed through interesting water sculptured passages and then descended a committing rift which would have been difficult in reverse. The bottom of this rift marked the beginning of the canyons and started with a squeeze. Not an area for the larger person! We travelled along these impressive canyons to arrive at The Satanic Traverses. These traverses have no rope protection and are really quite deep (i.e. I could not see the bottom). Whilst I was busy soiling my pants Paul and Claire were cartwheeling across these…

With more canyon walking and passing under an unbelievable gravity defying bit of “hanging death” we finally got to Plummet Chamber. This marked the limit of our trip; we turned round and to my horror headed back over the traverses…

Paul took us back via a different route passing some extremely dodgy sections. These were taped off to indicate do not to touch otherwise they would be the last thing you touch! Eventually we entered Nurden Hall and into Dome Chamber. At this point we did a short diversion into Dog Tooth Chamber to see some impressive crystal formations. 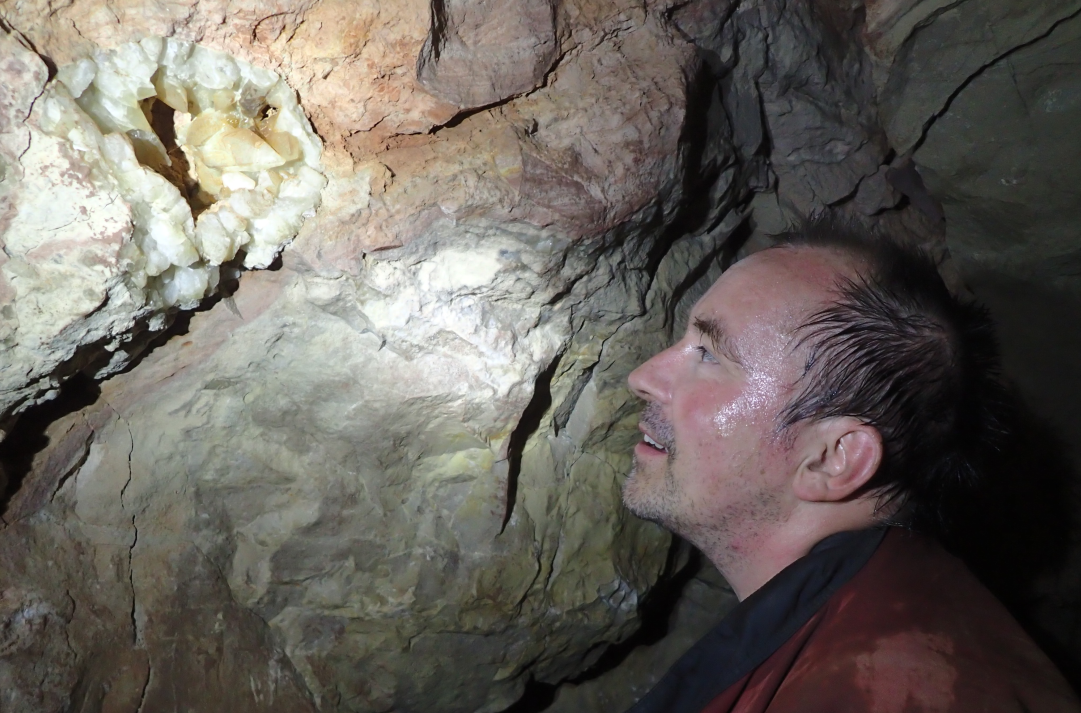 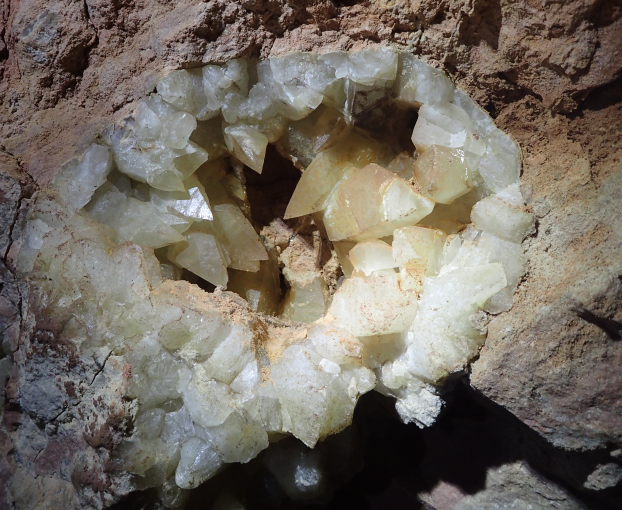 Close up of the crystal formation

After Dog Tooth Chamber we returned to the entrance and powered up the 30m fixed ladder to discover Iain patiently waiting at the entrance. Total trip time 4.5 hours.

These trips were excellent adventures; with a mixture of impressive engineering, stream ways, large chambers, flat out crawls, pitches, scary traverses, fossils and formations. My only bit of advice is make sure you bring drinking water, you are going to need it!