On the Friday we all descended upon Buckfastleigh. The traffic was appalling to get there for all concerned. The M4 had been like a carpark for the South Wales contingent and Duncan had given up for a rest at Dorchester after crawling along at an average of 10 miles an hour for most of his trip. But at least the South Wales crew had been lucky enough to drop in on fellow SWCC members Lizzy ‘chicken whisper’ Wire and Matt ‘DIY king’ Wire for a spot of lunch on the way down to Devon. 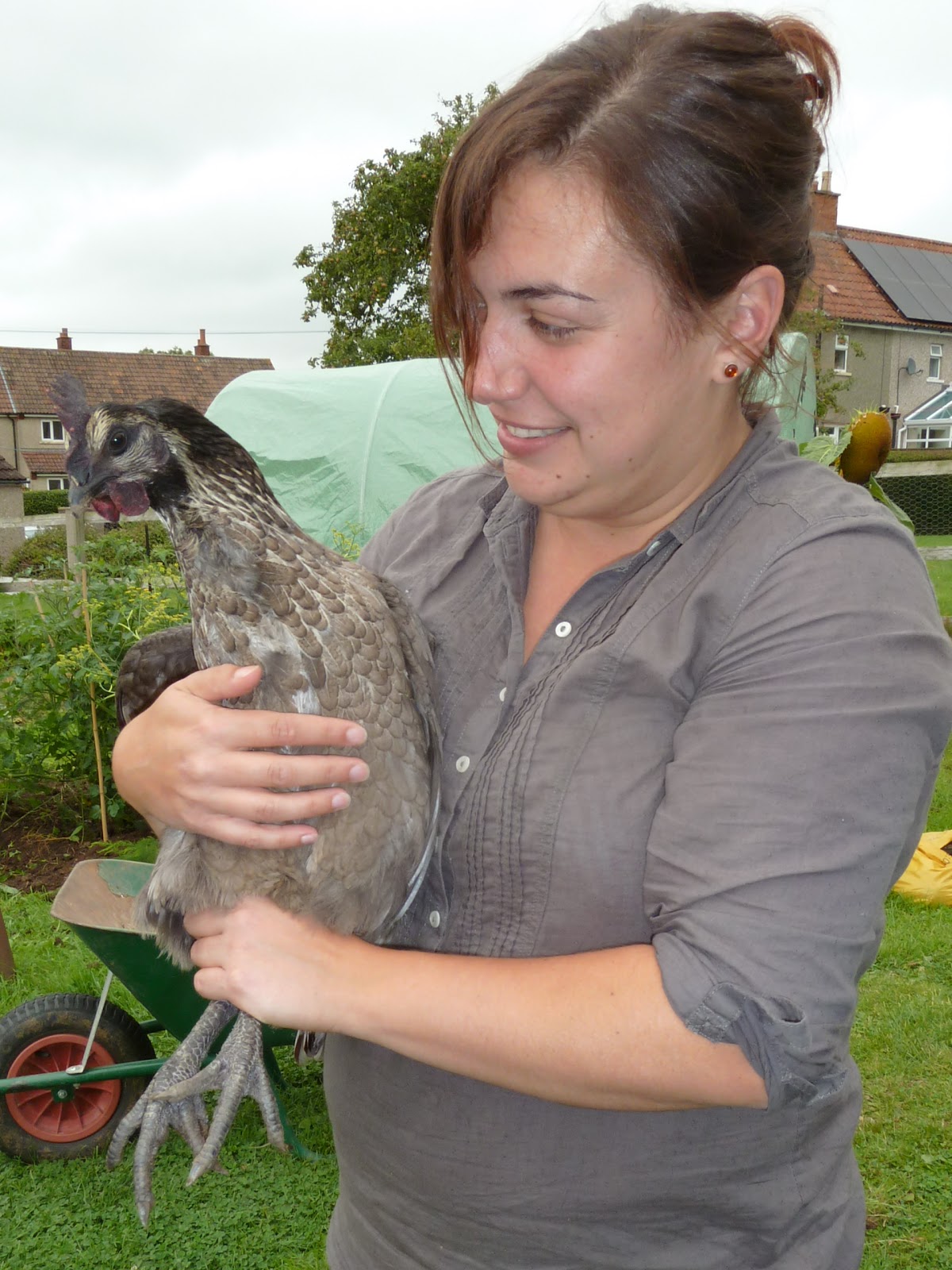 As part of the group had campervans we stayed in separate locations. Claire and Duncan at the Devon Spelaeological Society Club Hut, whilst the Freems, Lel and Iain grabbed their campervan spots in Church Hill campsite. For us at the DSS hut we were quickly enlarged by the addition of 7 members from the Gloucester Speleological Society. Needless to say much drink was done and GSS got into a “gross out” competition of who had had the worst disease. When one member started talking about squeezing out bot fly larvae from his eyebrow I gave up and went to bed…


For those who have never stayed at the DSS hut; it is a small, clean and homely hut conveniently within town a short walk from pubs and shops. The only complaint is a fire alarm has been expertly placed above the cooker and is linked to all others in the hut so when GSS started cooking their breakfast I was awoken by a high pitch shrill 1.5m away from my head. Not a great way to start the day!

Saturday, Claire and I drove over to the campsite and met up with the others. Lel chilled out for the day (also got lumped with the car keys) whilst the rest headed off to Baker’s Pit. To my surprise the entrance really was in the next field! It is a concrete tube and gated (key can be acquired from DSS hut).

The 5 of us entered Baker’s at the same time and followed an excellent description of the cave provided by Glenn Phleps (DSS). We managed to find the climb up to the Plymouth Extensions with only 2 very slight deviations from the correct route. I (Claire) arrived first and found myself looking up at an unlikely looking hole above my head. This was the start of the tight 5m climb to the upper series. From the ground it looked a little intimidating, but doable, so I gave it a try. There was no chance of turning around, bending my knees very much, or moving my head greatly once in the climb which made it slightly awkward finding footholds and handholds. Gravity did not help either. I didn’t need to take my helmet off to get through, and this reassured me as I knew I had been through tighter places. Once I was committed to the climb, my main concern was avoiding slipping back down and landing on someone, rather than worrying about how narrow it was.

I don’t think I climbed it in the most elegant fashion, but I got up, and waited for the others to follow. Duncan tried next. He got to the tightest part of the climb and then, finding it pressing tightly on his chest, backed out. He tried again and the same thing happened. Iain and Andy then had a go too and both decided that they could not fit. I suggested looping a couple of slings through an eyehole on my side of the climb to provide better hand and footholds. I did this and Duncan attempted the climb once again. He got through the tightest part this time, but found it very uncomfortable and was worried about getting back down through it. This made him decide to go back down right away and not follow me through. Antonia was the only person left to face the climb. Unsurprisingly, she had no problems with it. This then meant that the trip had to split in two. Antonia and I would go and explore the Plymouth Extensions for an hour (it ended up being closer to 1.5 hours) and the others would explore the lower passages. 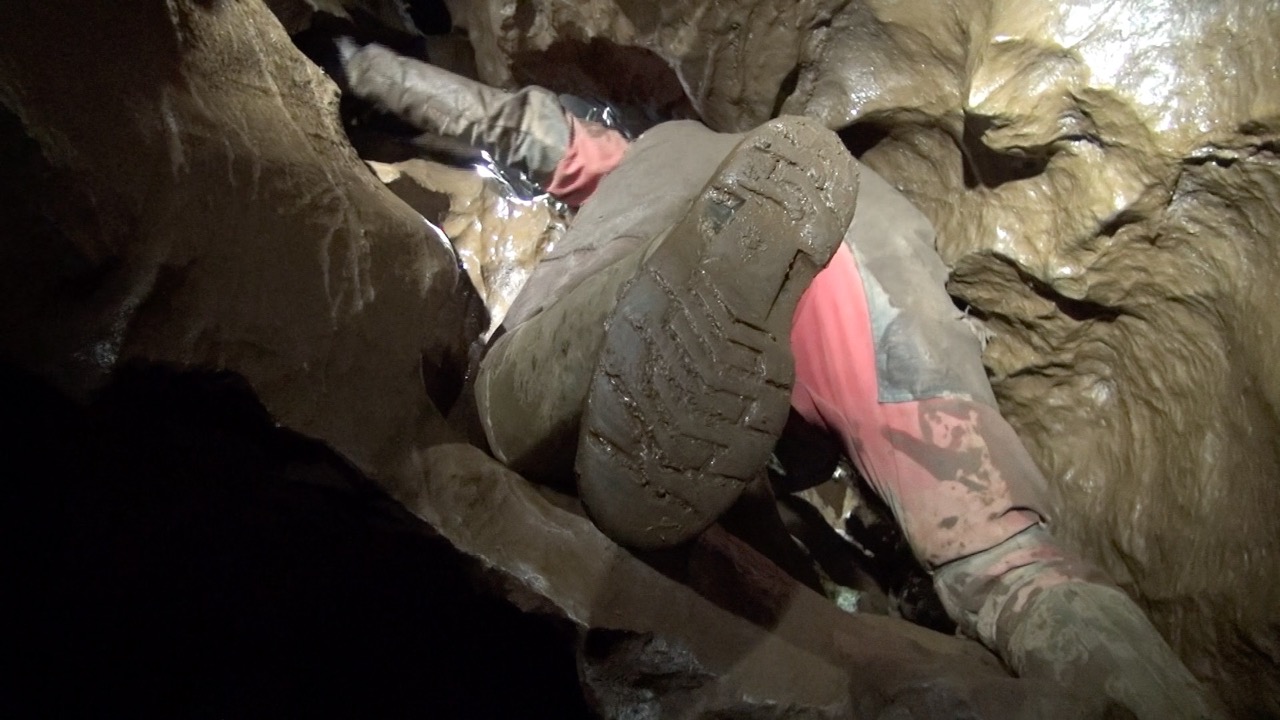 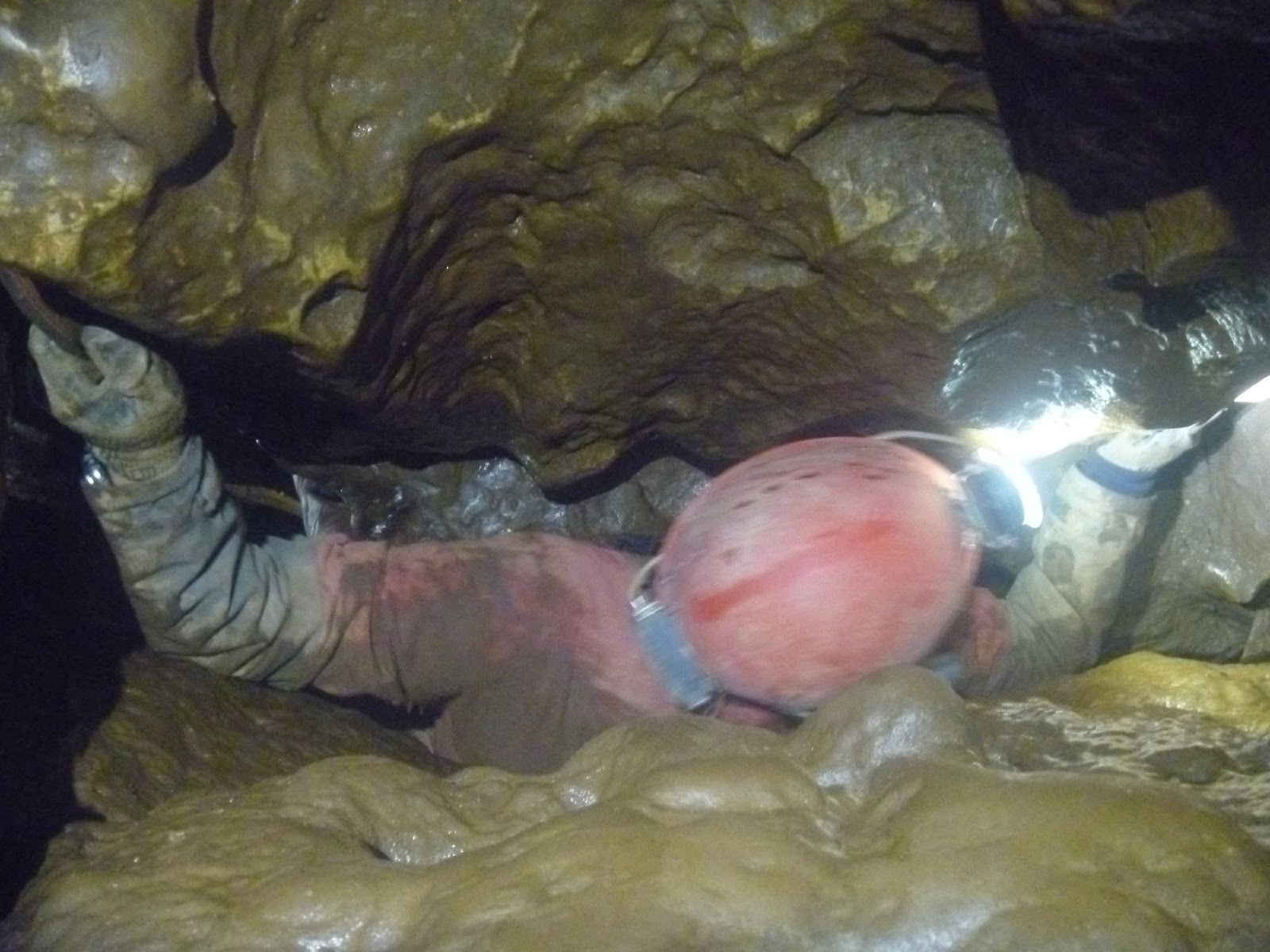 At the top of the climb, it was only a few metres of walking and crawling before we reached Plymouth Chamber. This chamber was more wide than high and had 4 rifts across its floor. My first impression of this level of the extensions was that navigation was going to be tricky. The whole area was like a swiss cheese. There were potential ways on everywhere and the survey was already mud covered and difficult to read. According to the description, the way to the next level was to cross these rifts and head straight across the chamber. We did this and shortly came upon Jam Jar Aven. I took one look at the climb here and decided it was too terrifying for me. Antonia had a look too and whilst she thought she could probably do it, she didn’t fancy risking falling down the rift at the base of the climb. Both of us were aware at this point that if anything went wrong here, the rest of the group couldn’t get into the series and a rescue would be a nightmare. We contented ourselves by alternately exploring and getting lost in this lower level for an hour or so more, ending our exploration at Flower Pot Passage. There were some nice formations to see and I hear there are more in the rest of the Extensions. Arriving back at the climb down to the lower series, I thought it looked slightly worse from this side as we were now covered in mud and slippery. But it didn’t actually pose too much of a problem. Hopefully we will return to explore the rest of Plymouth Extensions one day, when I have the courage to face that climb. Antonia and I then continued to explore the rest of the lower series getting as far as the lake and Crystal Corridor. 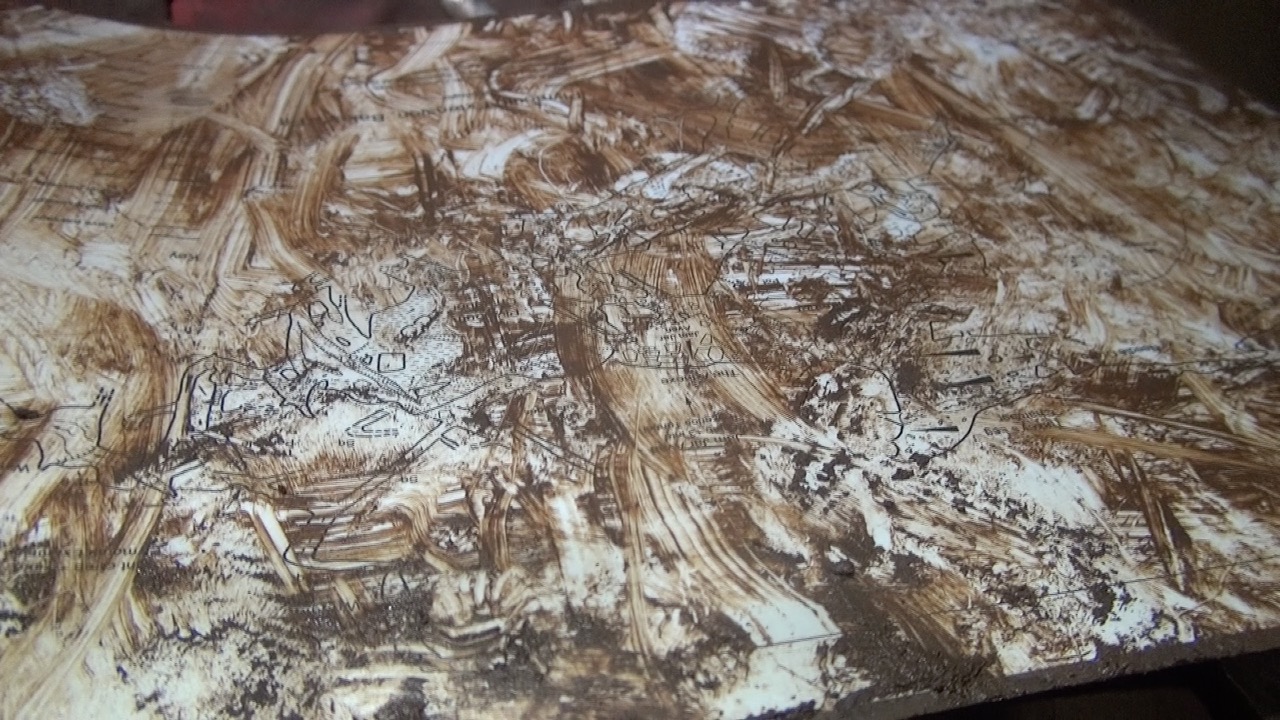 This is how the survey looked during our visit to the Plymouth Extensions. No wonder route finding seemed tricky… 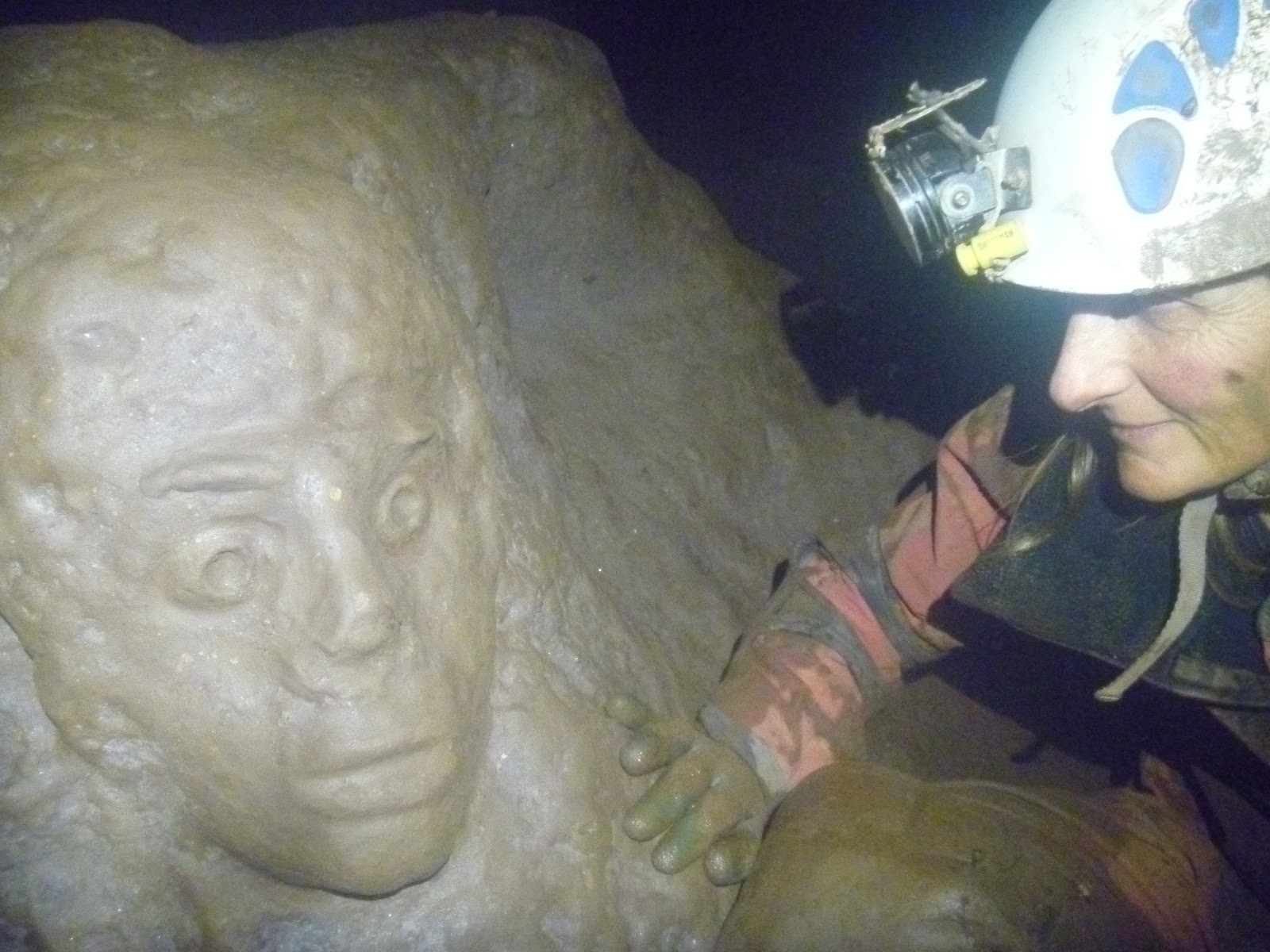 Antonia and the Judge.


Whilst Antonia and Claire explored the Plymouth extensions Andy, Iain and I continued exploring the rest of the cave. There were many well worn routes that led us around in circles. We covered all areas but one. Eventually Iain headed back to the surface whilst Andy and I explored a little more then took some photos.

Trip Time: 5 Hours for visiting most of the cave, including Plymouth extensions. This “Cave pearl” like formation is close to the entrance 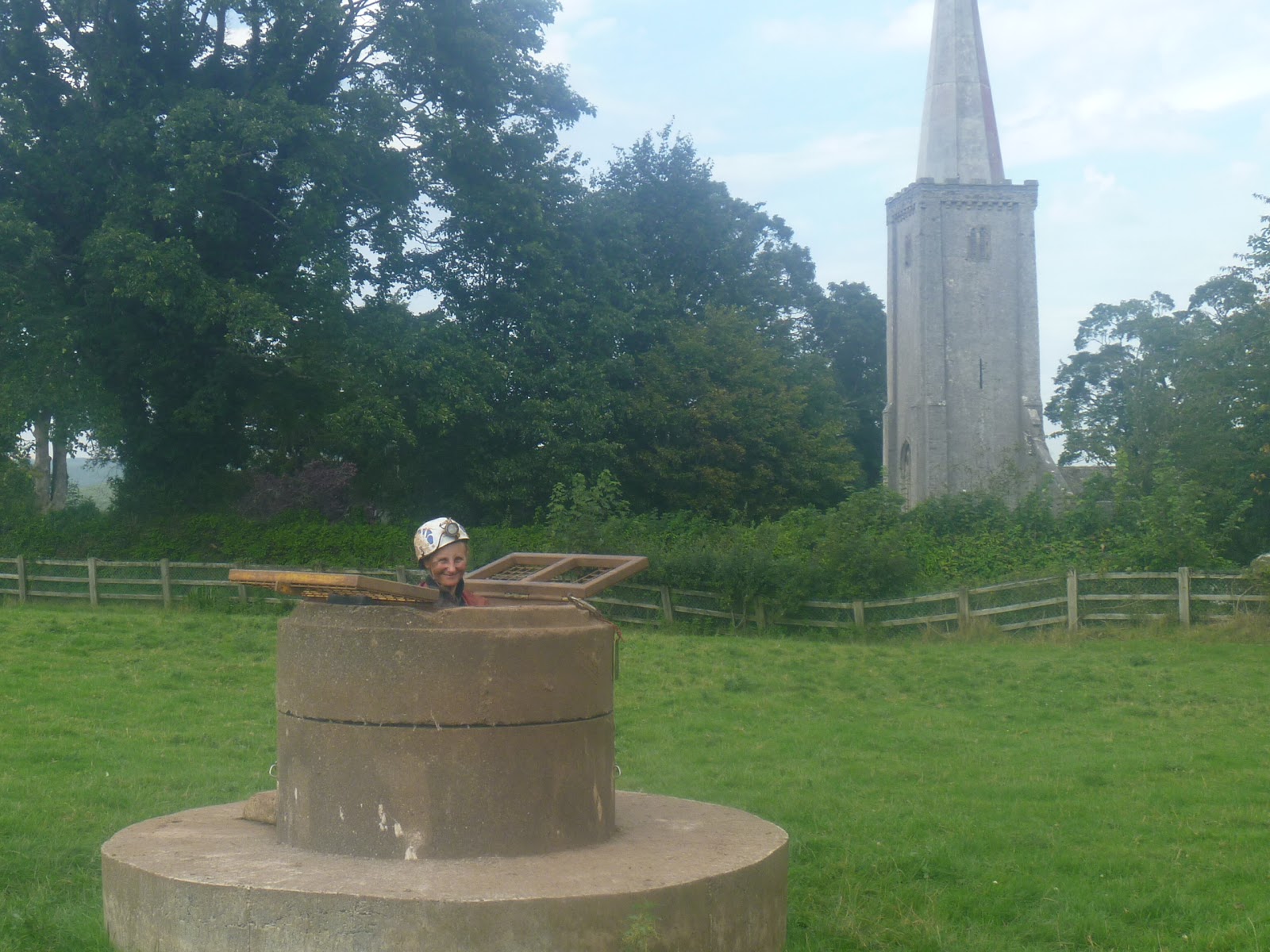 Watch a short film of our trip into Bakers pit

In the evening we all meet up at the local Indian restaurant and enjoyed a meal. 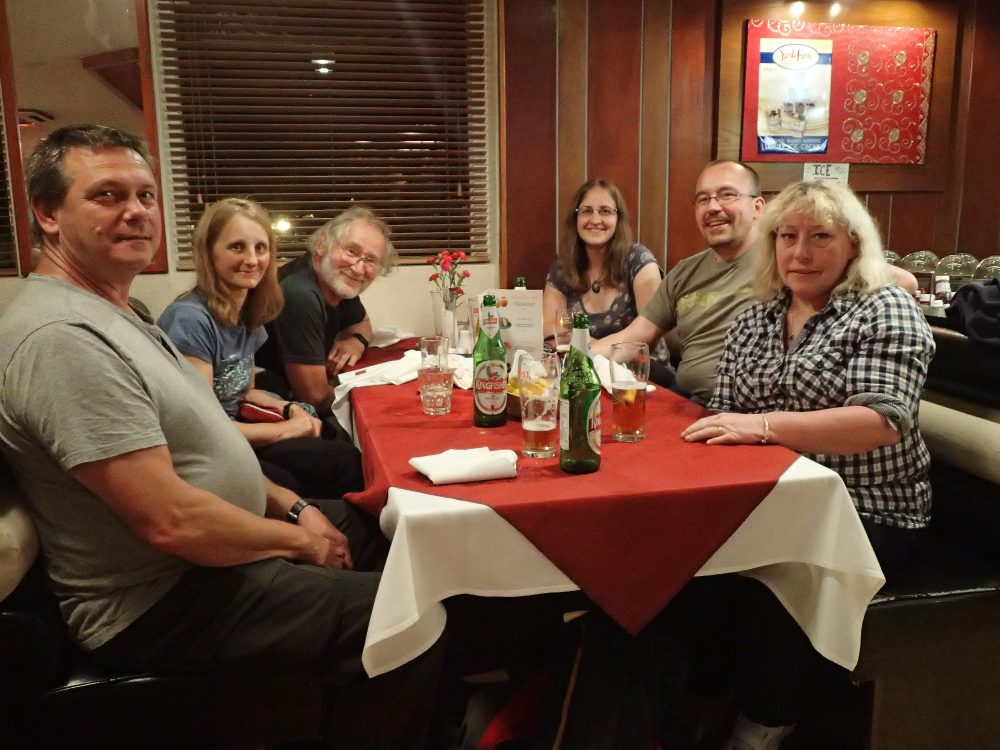 
Whilst the campervan team headed back to the campsite Claire and I checked out a local pub, which was bizarrely hotter than a sauna.

A great and wise man (Homer Simpson) once said, “why bother trying it’s the first step to failure”.

Sunday, got up on time, had breakfast, paid hut fees, packed kit, got over to the campsite, kitted up, marched off towards Pengelly centre to meet Bernard with time to spare only to realise the direction we had set off in was in the exact opposite leading back into Buckfastleigh… We were 20 minutes late with poor Andy suffering terribly with his sciatica.

Mr Freem is made of the right stuff and went from hobbling around looking most unhappy to shooting up the ladder and straight into the cave! A lesser man would have fallen to the wayside.

Lel and Iain enjoyed a visit to the local Abbey. Bernard Page, a cave leader, took us on a round trip in Reed’s visiting the iconic formations of the cave and informed us of the history of the cave. We saw interesting dog tooth crystals, the quirky “little man” formation and a ginormous Androniscus dentiger (see photos below). 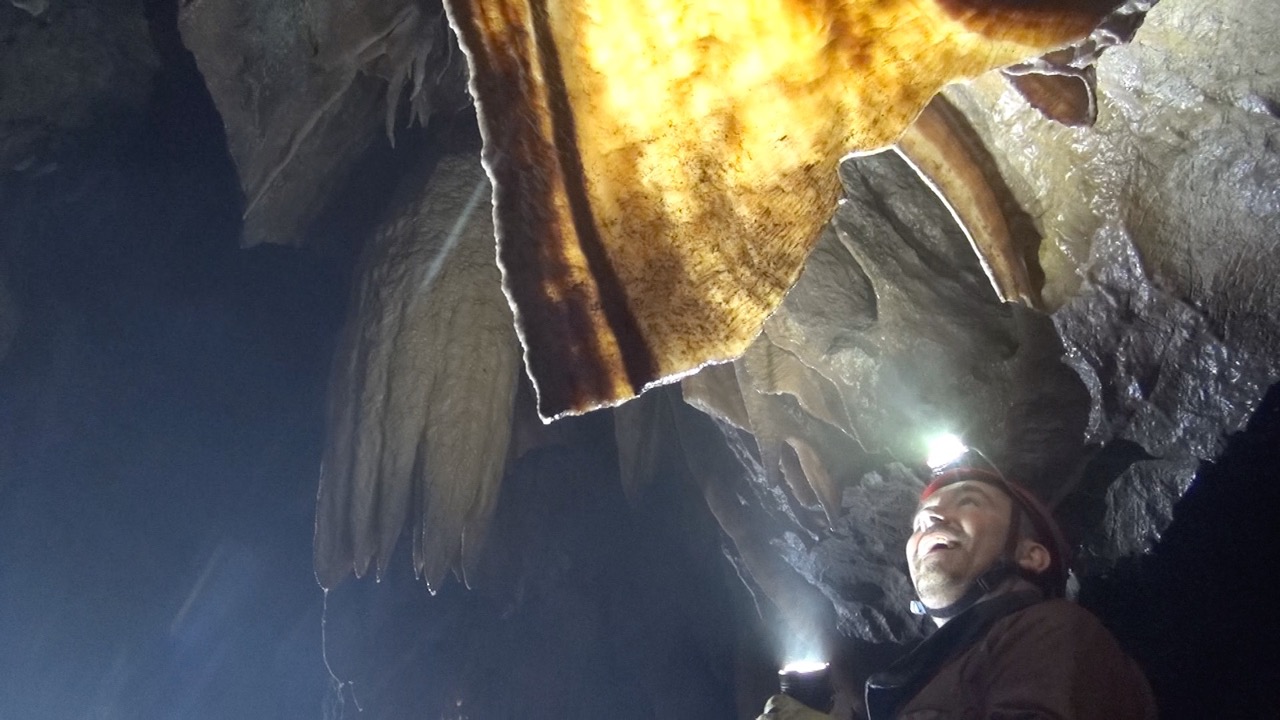 Duncan admiring formations just within the entrance to Reed’s 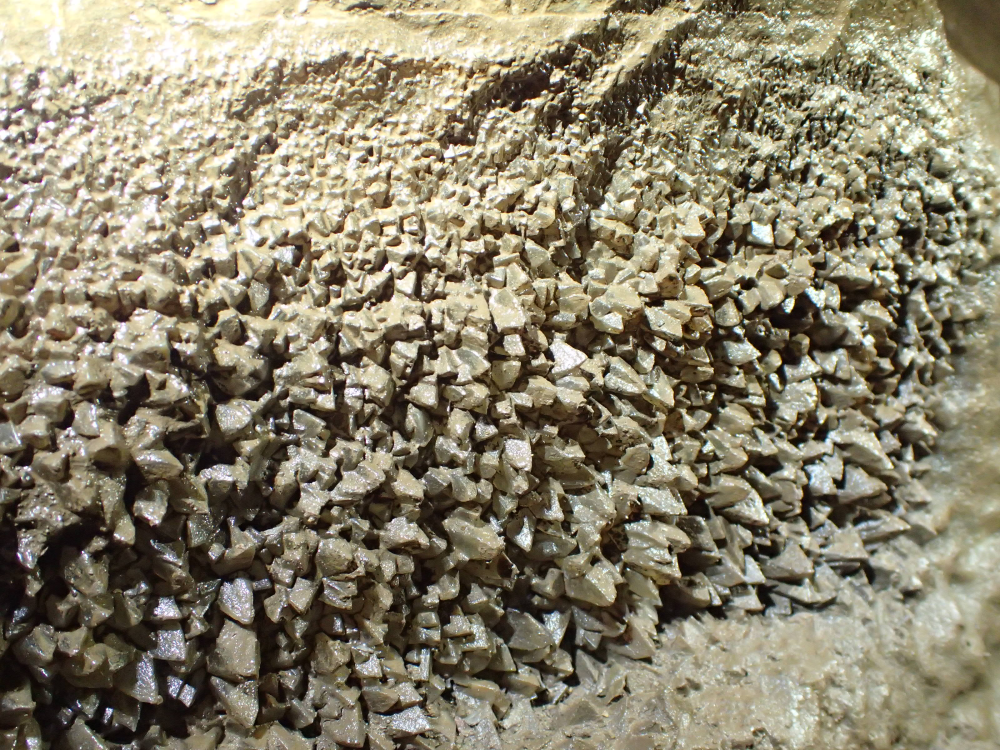 A band of dog tooth felspar The “Little Man” and its reflection in a pool. 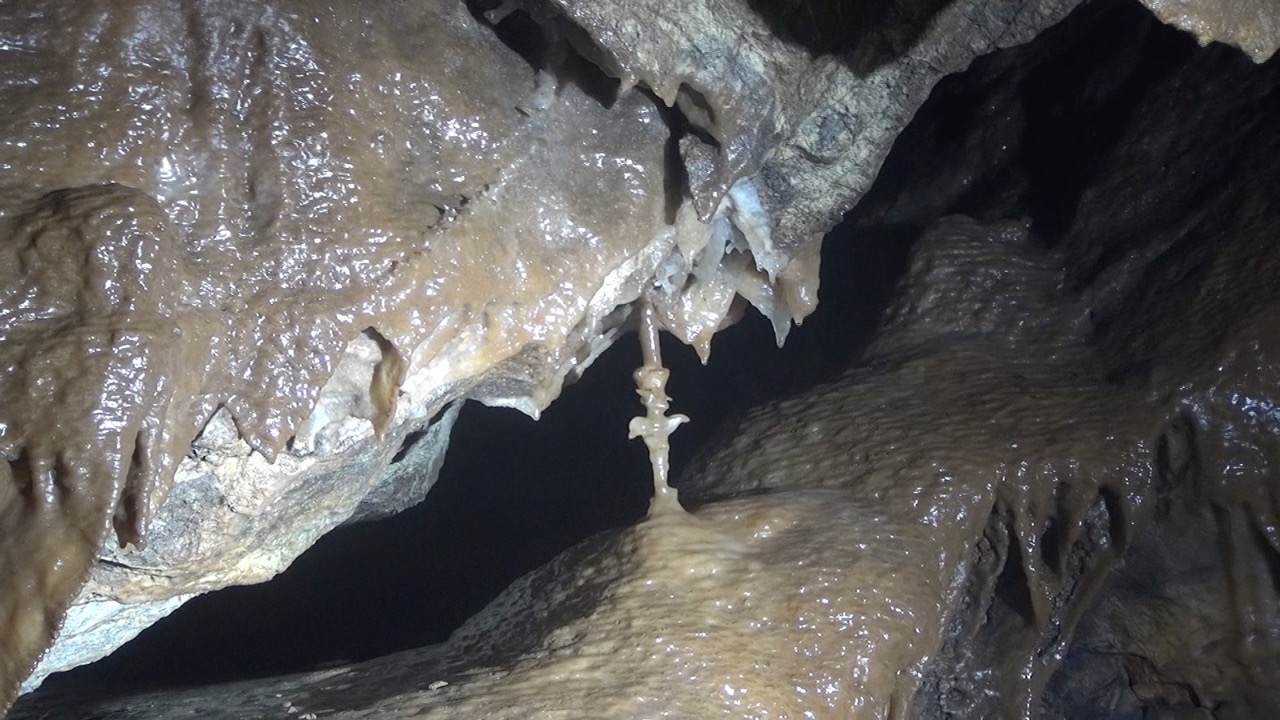 Close-up of the “Little Man”. Can you see his top hat? And those are his shoulders, he is not doing an Egyptian walk! 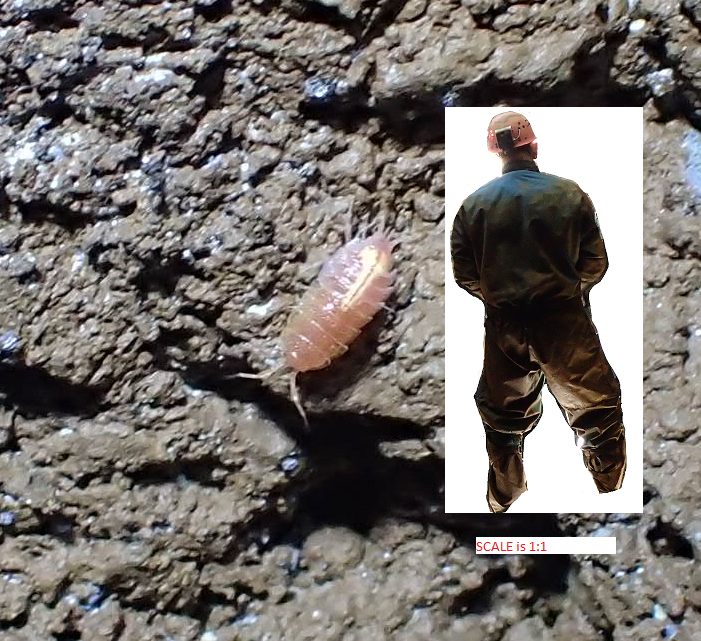 
After exiting Reed’s we popped into the short Joint Mitnor Cave to see an unusual set of animals bones.

Watch a short film of our visit into Reeds here

After visiting Reed’s and Joint Mitnor Cave Bernard took Claire and Duncan to Bunker’s Hole, a small cave a short drive south of Buckfastleigh. After a quick change back into our caving gear, we headed across a field to a small woodland that hid a depression. The depression was a dark and dank place. Bunker’s Hole entrance is a small opening hidden by ferns, rotting tree branches and Foster’s beer cans…

A steeply descending entrance (5m) leads to a flat out crawl (10m) to a gate. The gate was unlocked and Bernard entered the chamber quickly followed by Claire. I on the other hand came to a grinding halt. The gate hides a tight right angle bend into a narrow uphill tube. On my third attempt Claire took my caving helmet, I breathed out and forced myself up this restricted entrance. I was short enough to get round the corner and align myself with the tube. This would be an exceedingly (if not impossible) difficult squeeze for tall people or anyone larger than average size. 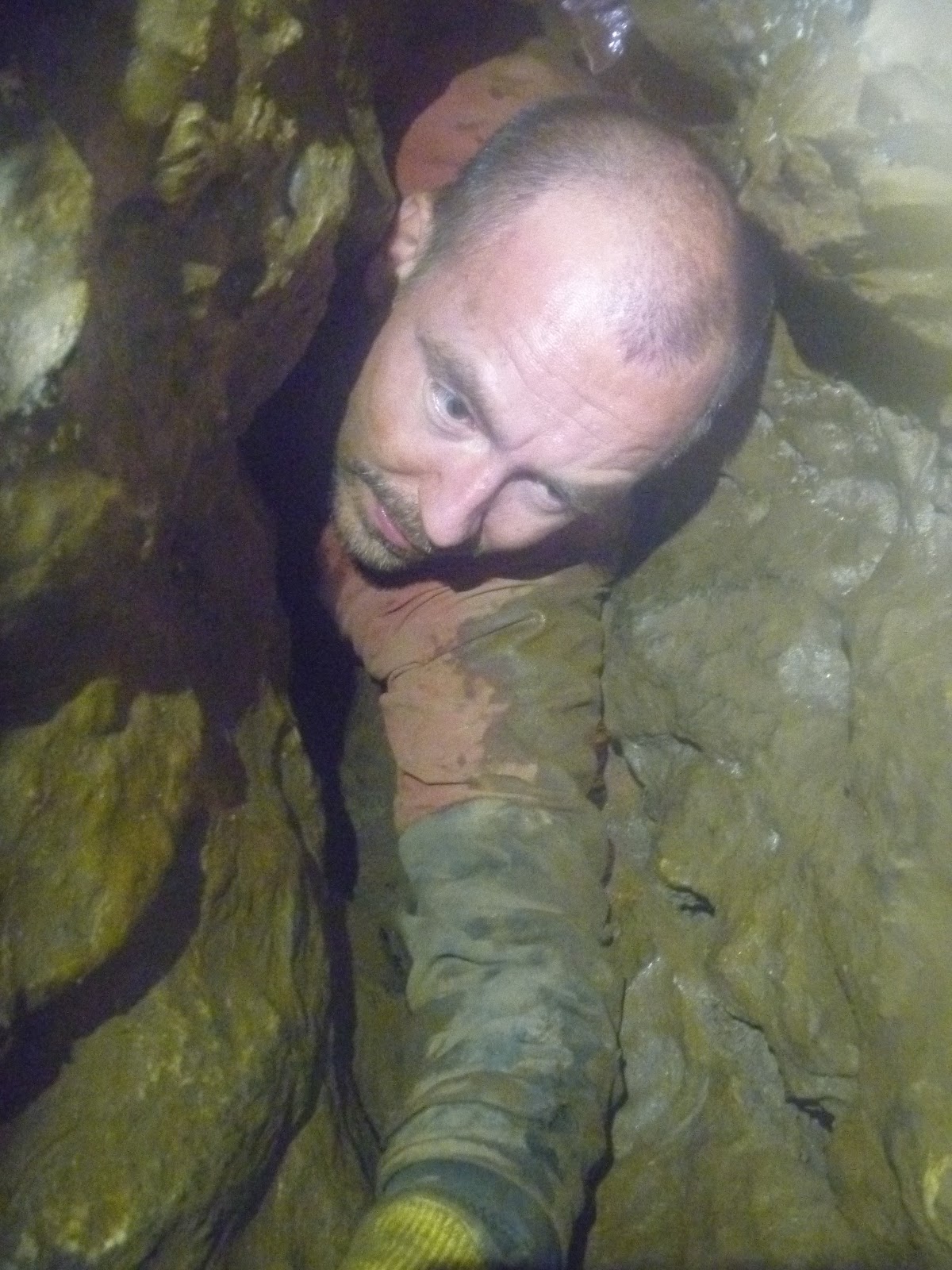 Duncan in the squeeze in Bunker’s Hole.

Whilst the cave is very short and guarded by a tight and unpleasant squeeze the rewards are worth the effort. The low chamber (~30m long) is only big enough to crawl around in on your hands and knees and is packed full of stunning Aragonite crystals. Great care needs to be taken as in some places you really are surrounded by them.

We spent about 30 minutes marvelling at these fantastic formations and taking photos. My experience was somewhat marred by that constant voice in the back of one's head “...you are going to have to go through that bloody squeeze again…”. Thankfully it was much easier going out and the last 5m out of the cave was probably the most awkward bit. 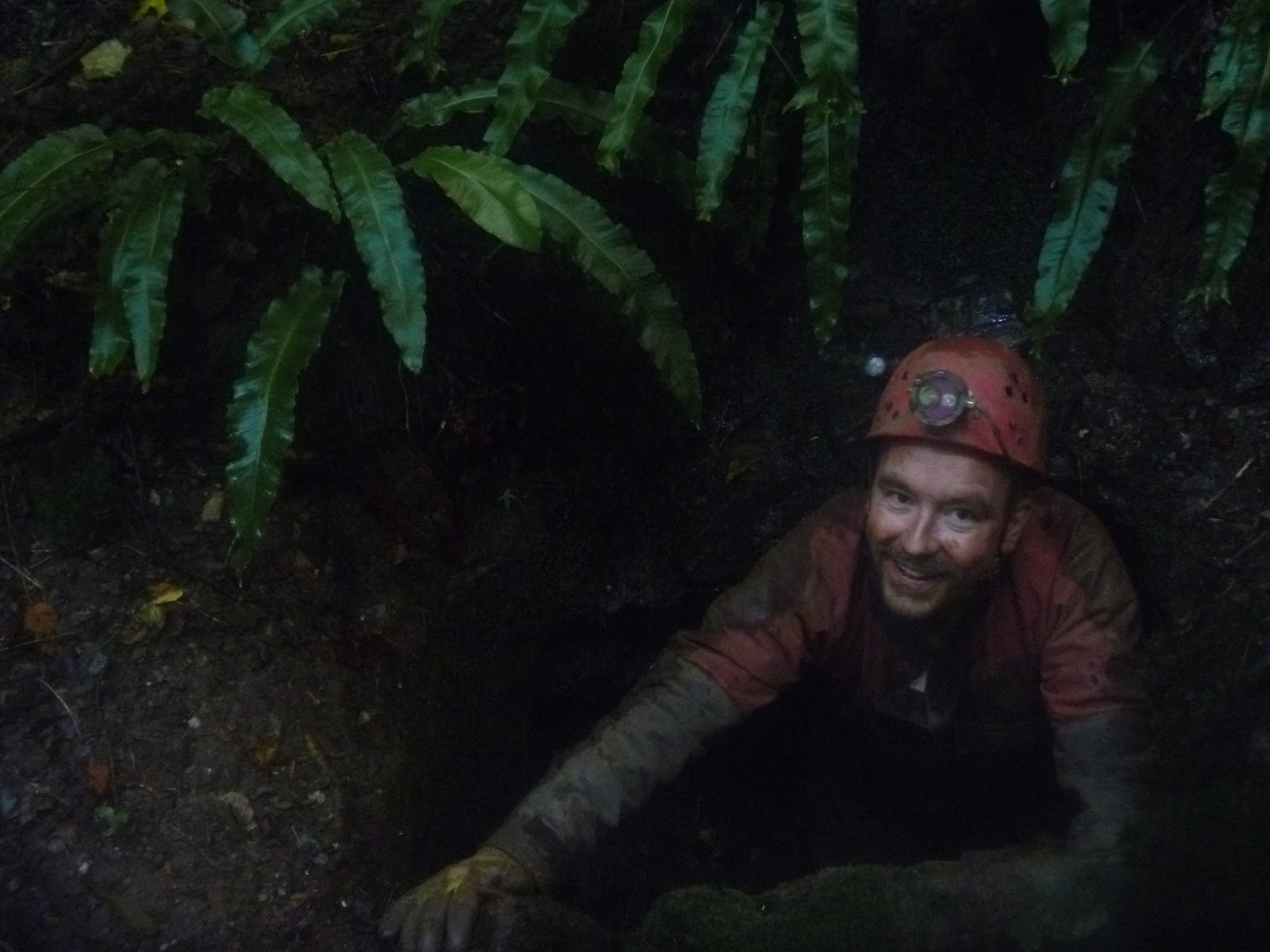 Anyone saying there are no formations in Devon caves is talking rubbish, check out these beauties! 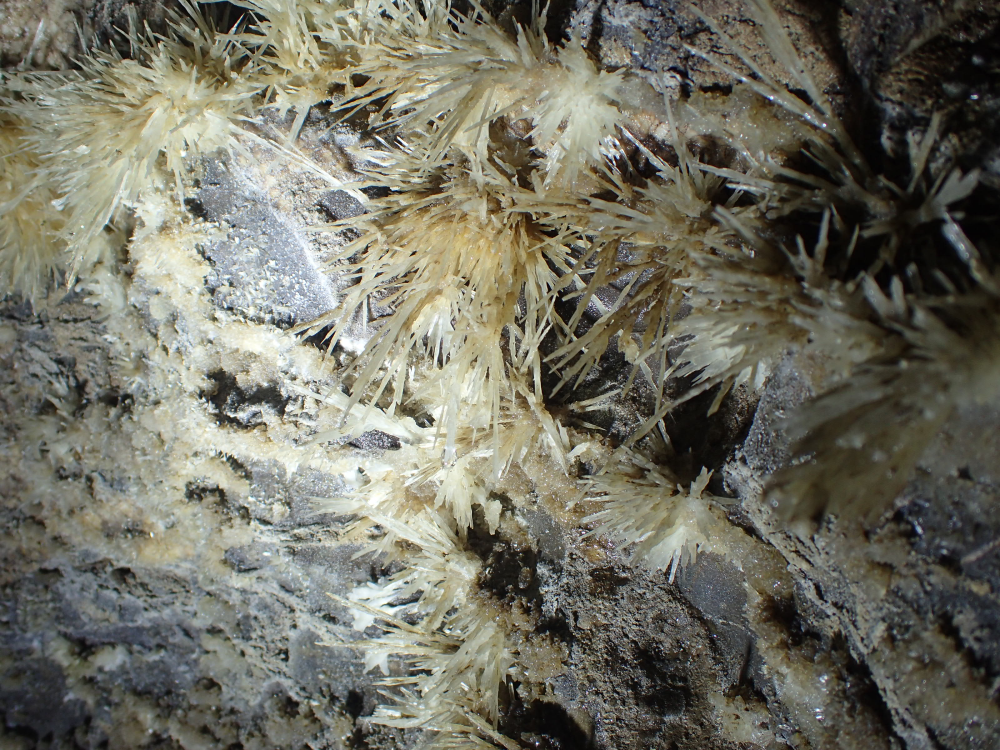