On arriving at the MNRC hut we were greeted by the hut warden, David. We were able to obtain a variety of keys which gave us the opportunity to pick and choose our trips. Then for some, it was an obligatory visit to the Hunters Lodge!

Three trips ran on Saturday each have their own report:


Many thanks to Peter Hall, local Mendip caver who was the guide for this trip. Photos by Sanita.

The cave seemed to have two modes - you are going through a narrow-ish bit or you are comfortable to walk, where subjectively it felt like most of the time you spend in the narrow-ish bits of some shape and form. Never the less it was great fun and a well worth trip. Like it says in the cave description, the first proper formation you come across is the Curly Wurly Stal which you can partly see from a hole in the wall of the passage first and once you turn a corner it turns out to be even bigger and nicer looking.


Our next stop was the Splatter Chamber, where we got to hear about some theories as to why the splatter is there.

After some crawling, we came out in the Grotto of the Singing Stal. You don’t tune into it straight away but once everyone had put their lights out, you could hear it ‘sing’. It sounded like a happy squirrel munching on a nut or something. 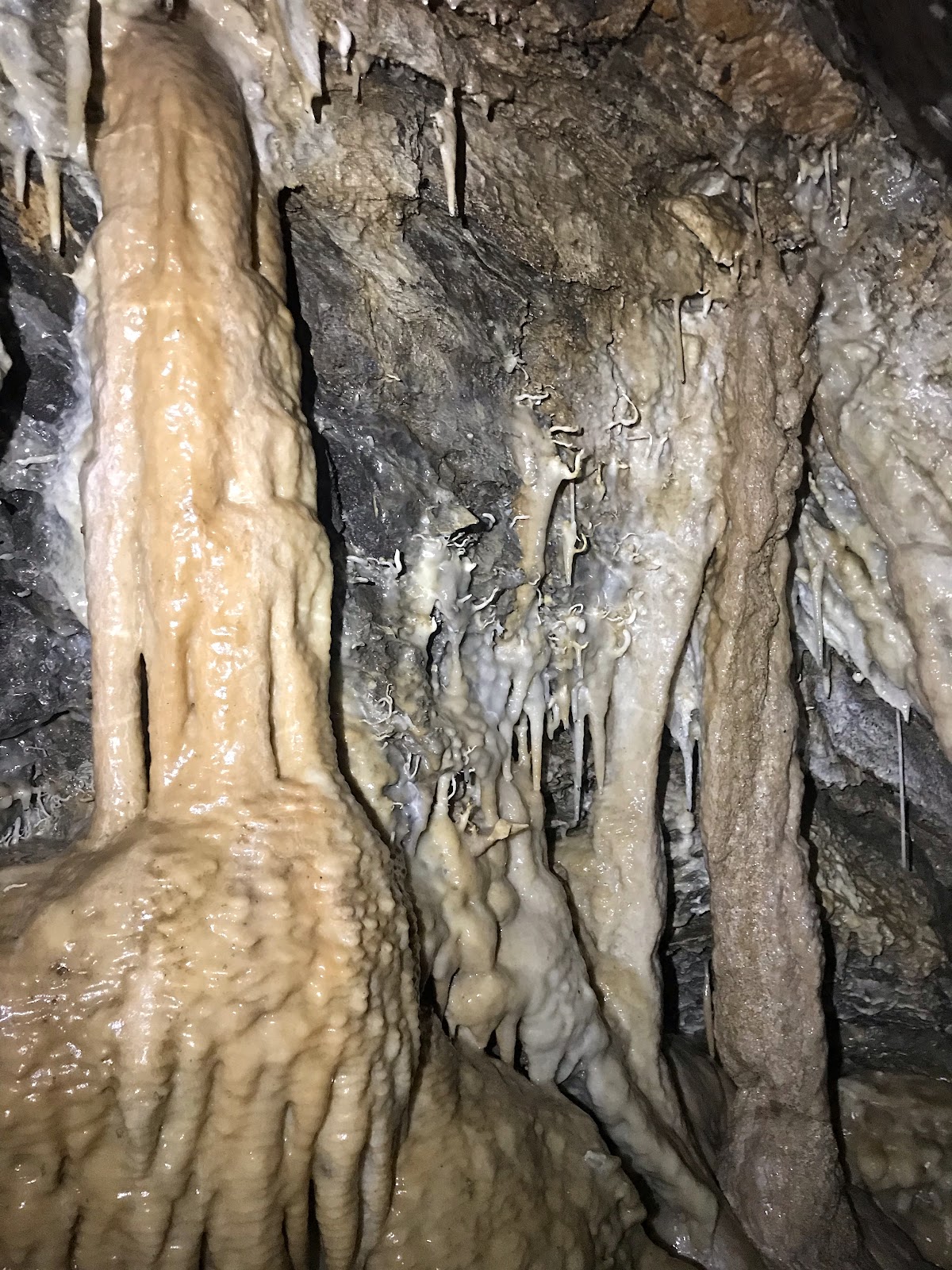 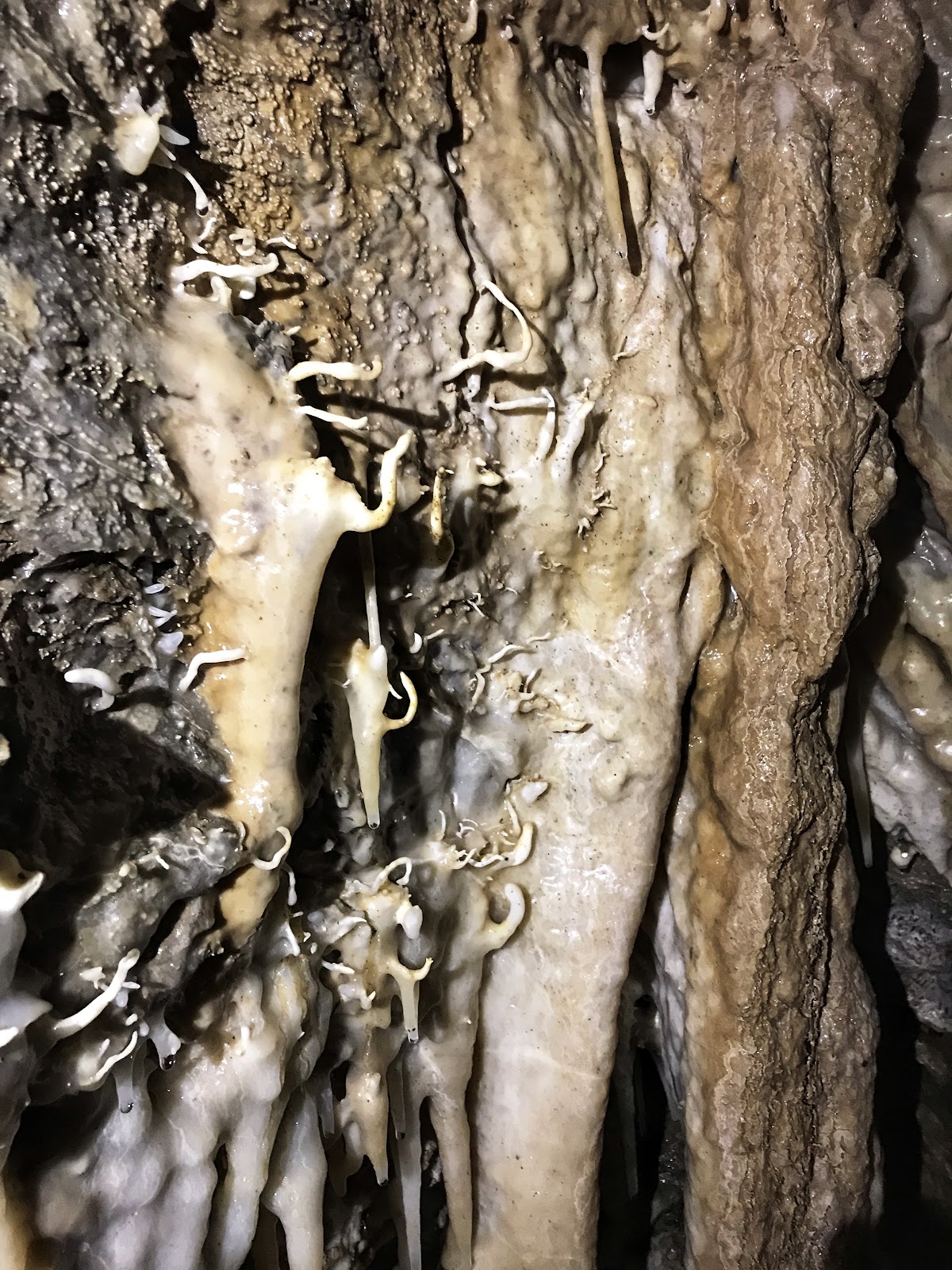 Grotto of the Singing Stal. The stal sounded like a squirrel munching on a nut or something.

Unfortunately, The Narrows ended up being too narrow for one of us so we had to continue as a party of three. Past the Narrows Frozen Cascade and the Blades were the most impressive formations. 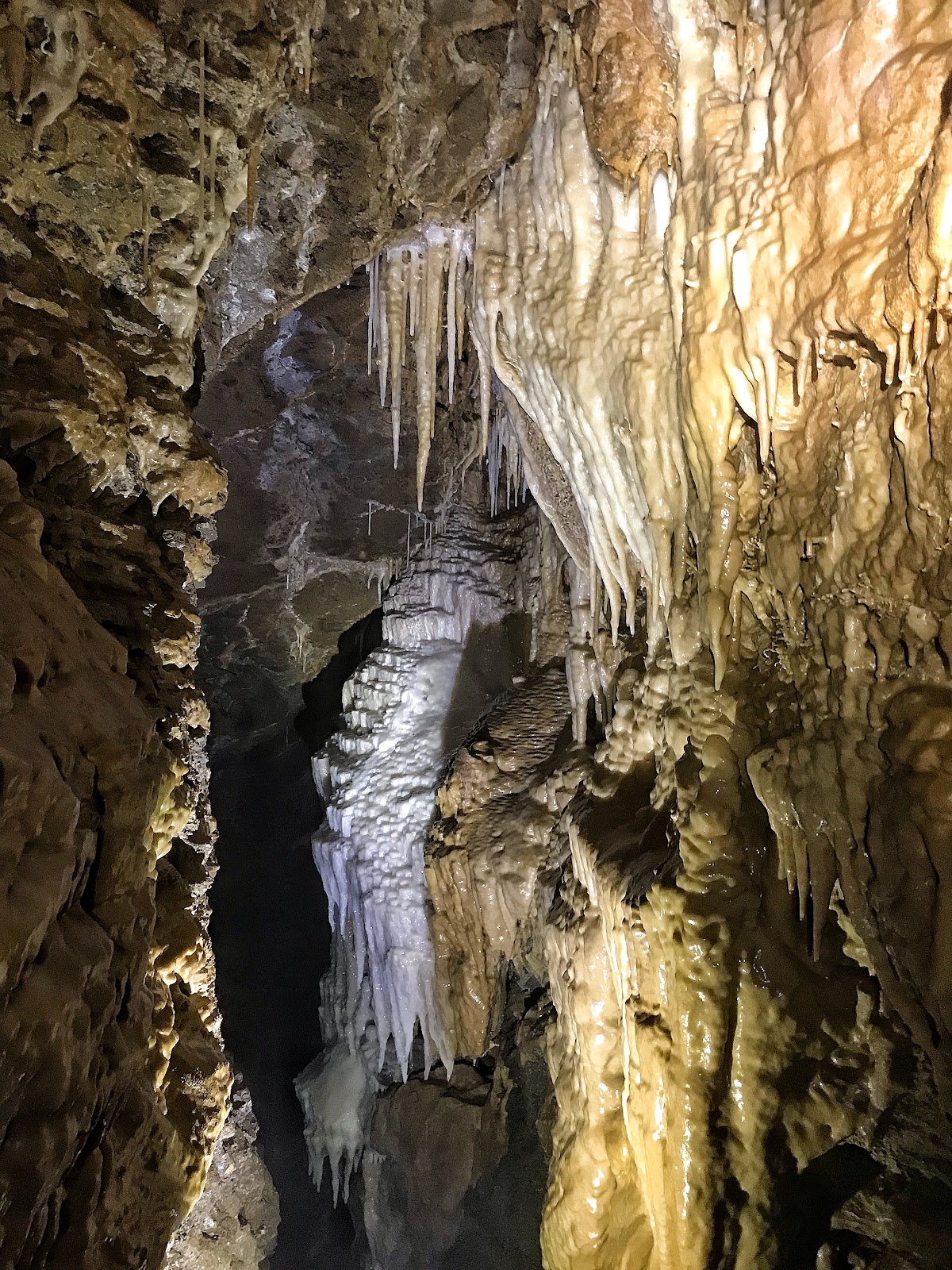 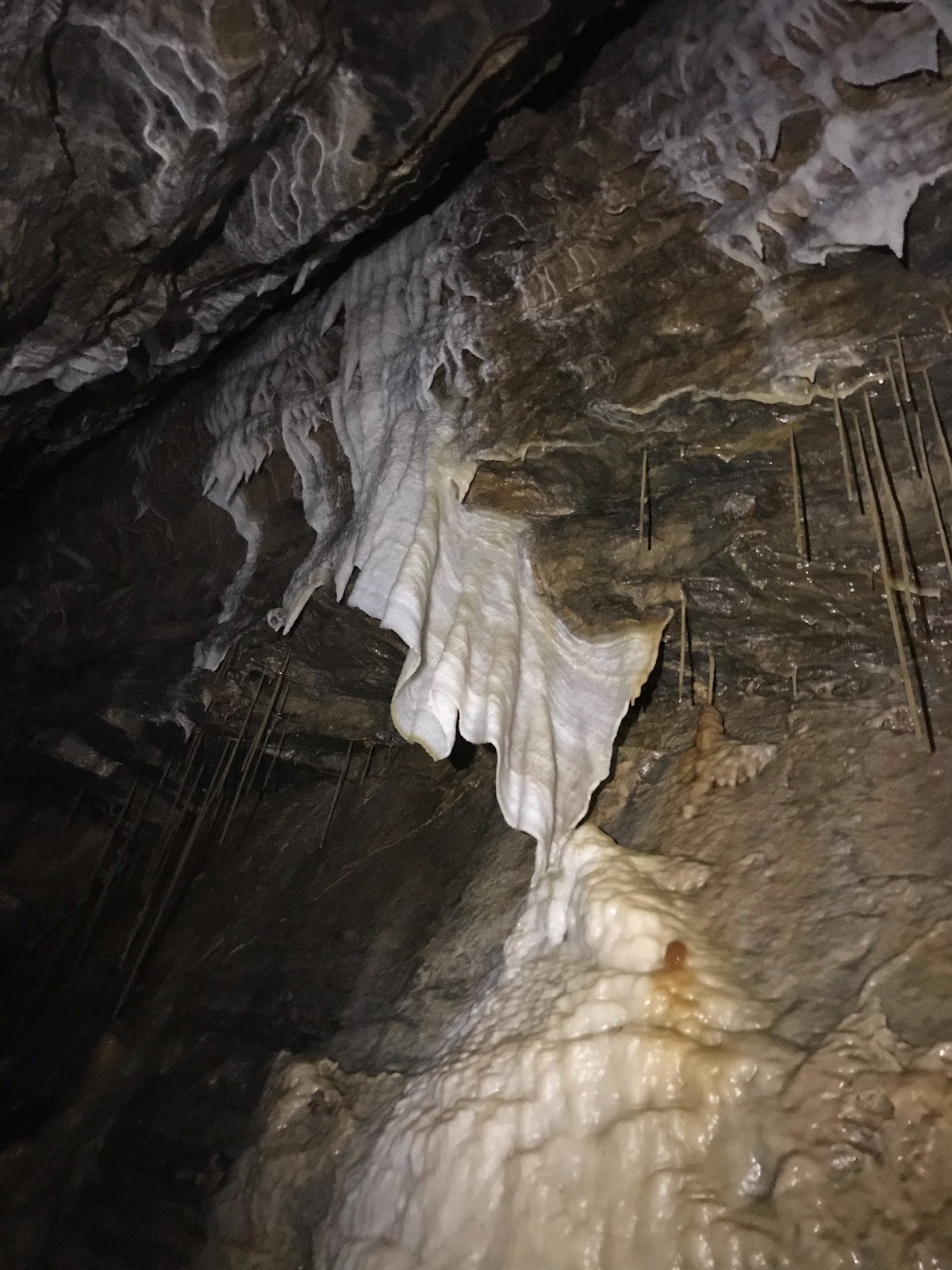 As the cave description says Portal Pool sumps from autumn to spring. Though Peter started to water pumping process, we wouldn’t have gotten much time on the other side, so we opted to not go through the Portal Pool. Instead, we had a listen to the strange noises the air-bell was making...

Turn the sound on your computer and watch the video to
hear the weird gurgling sound the air-bell made.

We then had a quick look at the Timeline passage with the crystal pool cascade and then made our way back at a leisurely pace taking photos of all the pretties.


On the way back we had a quick stop at the Citadel to look at the Blobs. They were strangely pretty for the fact that there was not much there in terms of shape or size.
Trip length: 4-5 hours leisurely pace to the Portal Pool.

As this was Hywel's first SWCC trip and first visit to the Mendips we thought we'd treat him to the splendour that is GB. Massive passageway, plenty of formations and a waterfall to climb. What's not to like about that?


The rain in Wales the previous week had been tremendous and it had almost been impossible to see through the windscreen at times on the journey over on Friday evening as the rain was torrential. We were expecting GB to have a lot of water and so decided to do the round trip with a couple of short extensions. We thought the duck into Ladder Dig Extensions would be impassable, so didn't bring a ladder.


But we were wrong. We went to have a look at the waterfall and could see that the water was nowhere near the level we were expecting, it was quite low!


We were committed to the round trip now so off we went. We put Hywel at the front of the group for a lot of the trip so he could have a go at exploring the cave for the first time, without just being led. All the group were capable cavers, so it didn't take long to complete the circuit. It was great to have GB to ourselves on an Autumn Saturday afternoon. The only people we saw were a student group we met at the entrance as we exited the cave.

The sun was shining brightly when we got out and although we were tempted to go and do a second cave in Burrington (Rod's Pot), the lure of lunch and a walk won out. We went to Blagdon and walked around the fields and lake instead.

For much of my caving career this cave has been closed to cavers. A few years ago a change in land ownership meant the access to this cave was improved and is now accessible if you can obtain a CSCC key.

Whilst not Mendips longest system it is a sporty cave and you can easily pass the time exploring the various routes and bitter ends.

The entrance is tucked away in an overgrown depression in a field just up the road from the Wessex Caving Club.


A short scramble leads to the 8m pitch. It has a couple of P-bolts and a convenient ledge, so a nice pitch for beginners or people less experienced in the dark art of going up and down wire ladders.

We followed the obvious way on which lead us down the steep main rift, this was some of the larger passages within the cave. It terminates at a sump and a particularly dodgy section of the cave with the roof seemingly propped up with a stack of rotting logs. Eek!


It was a lot of fun seeking out the various routes and trying to connect parts of the cave. As the system is quite small there was never the fear of getting totally lost as you would do in the much bigger Welsh systems.

But word from the wise going UP shale passage towards the entrance is quite cramped and arduous, definitely would be much easier going DOWN it!


The mystery of the elusive Ploughboy

We stayed at the MNRC, which happily was in walking distance to a pub: The Ploughboy. We knew the walk was tinged with danger, along a busy main road in total darkness. Taking measures to avoid any pre-pub injuries, we ensured we were suitably equipped with high viz jackets and head torches. Marching in single file along the road felt like being on a weird school trip...heading for the best destination ever! Eventually, after about 20 minutes, we reached the pub. James un-clenched his bum cheeks as we re-grouped in the car park. Ah, safety at last!

Imagine our devastation when we realised the pub was closed. There were no lights on. Nobody was there; the whole place was completely deserted. Horror. Dejectedly, we turned around and trudged back towards the hut. Duncan called the Vic, who reckoned they could just about squeeze our party in. I was now hopeful that my Saturday night dinner would not consist of soggy, half-eaten caving mars bars and instant noodles (must bring better food next time).

On arrival back at the hut (the walk felt longer on the way back without the anticipation of destination pub), we figured out who was going to drive. Helen S volunteered to take people in her very lovely and fairly new VW Golf estate. We eagerly clambered in, our mouths watering at the thought of the delicious food which awaited us. However, due to a flat battery in the car key, Helen’s engine would not start. Everyone exited the vehicle.

Eventually we managed to arrange everyone into cars and off we headed to the pub! Helen made some calls to try and resolve her key situation - the issue was solved the next morning with a trip to Wells to get a new battery. We have a great time at the Vic, with plenty of food, beer and good company.

Taking advantage of the cave keys, two trips ran on the Sunday:

Ah, Sunday. The perfect time of the week to relax; tolerate your family; catch up on televised sport - or, in the case of a hardy group of SWCC members - explore a disused mine! The order of the day was Singing River Mine. It’s peak activity was in the 18th and 19th centuries mining calamine: the ore of zinc and lead.

The mine is located in Shipham, in the back garden of a house down Folly Lane. It was a strange experience to open someone’s front gate and walk through their garden in search of underground adventure.
Phil rigged the entrance ladder pitch and one by one we descended. I paid very careful attention as we explored the complicated labyrinth of passages, mindful of being able to find our way back in time for tea and cake. Although we had a copy of the description, none of us had bothered to read it before entering the mine. In hindsight, this would have been very helpful.

Eventually we found the lakes - woohoo! They were wonderfully clear and blue. As nobody fancied getting fully submerged, it was time to turn around. It would be cool to take a raft down next time to sail across.

Yet another collectors piece to tick off, Attborough Swallet is a short drive away from the MNRC hut. Parked in a lay-by, crossed the road and a short walk into a depression to a bright yellow concrete entrance. Can’t get much nearer than that.

This is yet another small cave with no fear of actualy getting lost. Cotham Hall is the largest chamber with a few routes leading off into various tight, wet, gnarly crawls.


Claire was leading the group as we got towards “Twist and Shout”, hesitant to descend a climb Claire crawled out to let me have a look. By virtue of being too large I had to partially descend the climb so I could turn around and get out of the crawl, it was at that point I realised the climb was much easier than it looked so called the others to continue. A few metres on and the tables were turned and I was hesitant to commit to a climb but Claire was small enough to get down it and work out where the foot holds were.Stephen jumped at the chance and quickly disappeared down into Watery Rift which terminated in a flat out crawl in a stream.

We then returned to Cotham Hall and explored Nasty Nasty which was a grim crawl into a wet and muddy tube, most of us bailed out on that! But Claire and James went out to sample more of the misery and reached a climb down that belled out at the bottom before throwing the towel in and going back to meet the others.

We then headed out via a tube connecting Cotham Hall to Happy Mondays. This short cave is a great Sunday trip if you wanted to get away early but still get a bit of caving in.

This was the trip where we also found monkey, soon christened 'David Attborough', abandoned in the lay-by near the cave.