With the exception of Colin and Phil (who turned up Sunday) everyone arrived Friday evening at Whitewalls and bedded in for the obligatory Friday night drinking session. Plans were hatched for an assault into Ogof Agen Allwedd and the inner circle trip.

Getting to Whitewalls had been problematic as the main road was closed for road works (again…) so everyone came up the incredibly steep road from LLangattock, first gear all the way! 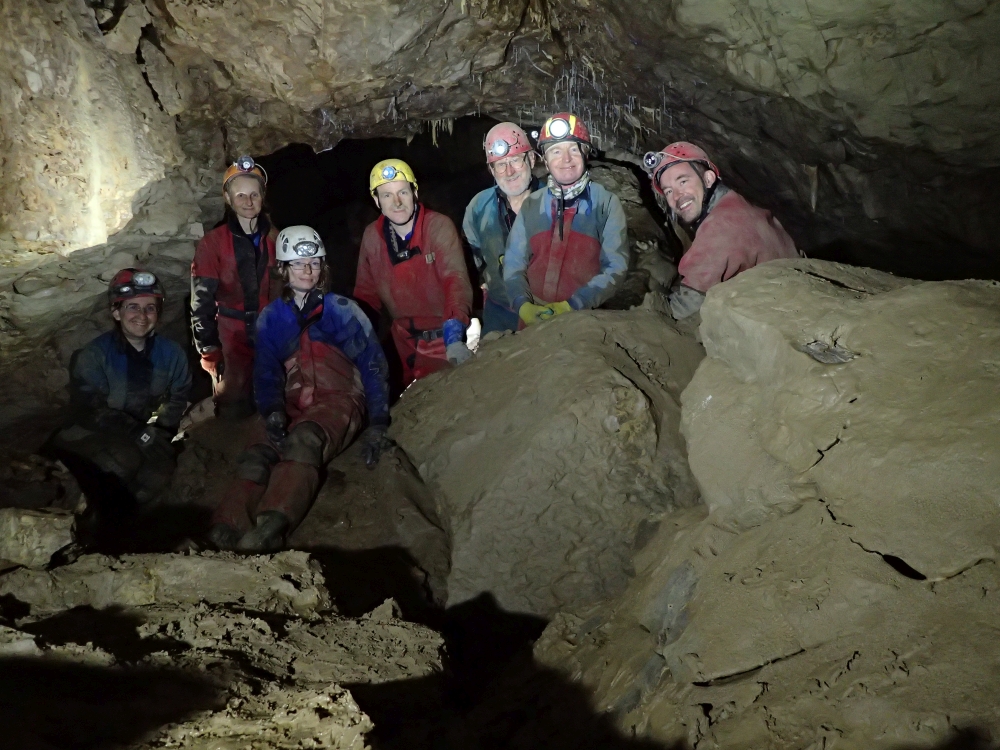 The team at the end of Sand Caverns, Agen Allwedd.

After some pre-caving faff we entered Aggy around 10:45. The entrance series is a fairly spacious walking and climbing passage, until it all got very narrow and tight, not what I remembered! We soon realised we had taken a wrong turn, back tracked and then found the way on.

We eventually got to the first choke and surprise we got lost again! For the record once you find the metal bar (which is a fairly new feature) head forward, right and then through a well worn tube at floor level on the left. Ignore the obvious stooping size page going straight ahead (which ends up in a dig a few feet further on)! Then it's a crawl along a very worn section of the choke until you pop out into the impressively large main passage.

A short walk along this then a right into main stream and head downstream. Part way along this, one has to pass through the second boulder choke. Eventually one arrived at the Northwest junction, which is where Main Stream and Turkey Stream meet, having slipped and slid most of the way there. This was a key location, and can be easily missed, as the group doing the Grand Circle that day discovered to their detriment when they had to retrace their steps all the way back down Main Stream and up Southern Stream after mistakenly arriving at Turkey Pool. Head downstream follows the main streamway, but upstream (Turkey) was the direction we were heading. If was such an important junction that a “race for life” water bottle was left prominently in the hope of stopping us stomping past the junction looking for it on the way out.

Heading upstream we passed through Turkey Junction with the infamous coal cellar passage coming in from the right. We eventually hit Turkey Pool a narrowing of the passage creating a deep pool. You know you are there as this is the only point along the river passage where one (if they wished) can be chest deep in water!

We passed through Turkey chamber and then took a right into Hawkins Horror and once through that into ever increasingly larger passages. Once at the junction with selenite needle passage we made an executive decision to not head into the inner circle. We had lost time in the entrance series and first boulder choke and decided to head into the Sand caverns. This allowed us to maximise our time in Aggy and not overrun our call out.

This turned out to be a good choice as the Sand Caverns are really quite large and although not packed with formations well worth an explore.With a team photo taken at the bitter end we headed out. The Freems had been filming along the way and the video of our trip is below.

In the evening a bunch of us headed to the local Indian for a slap up meal!

Beer and Popadums at the Red Indigo restaurant in Crickhowell. 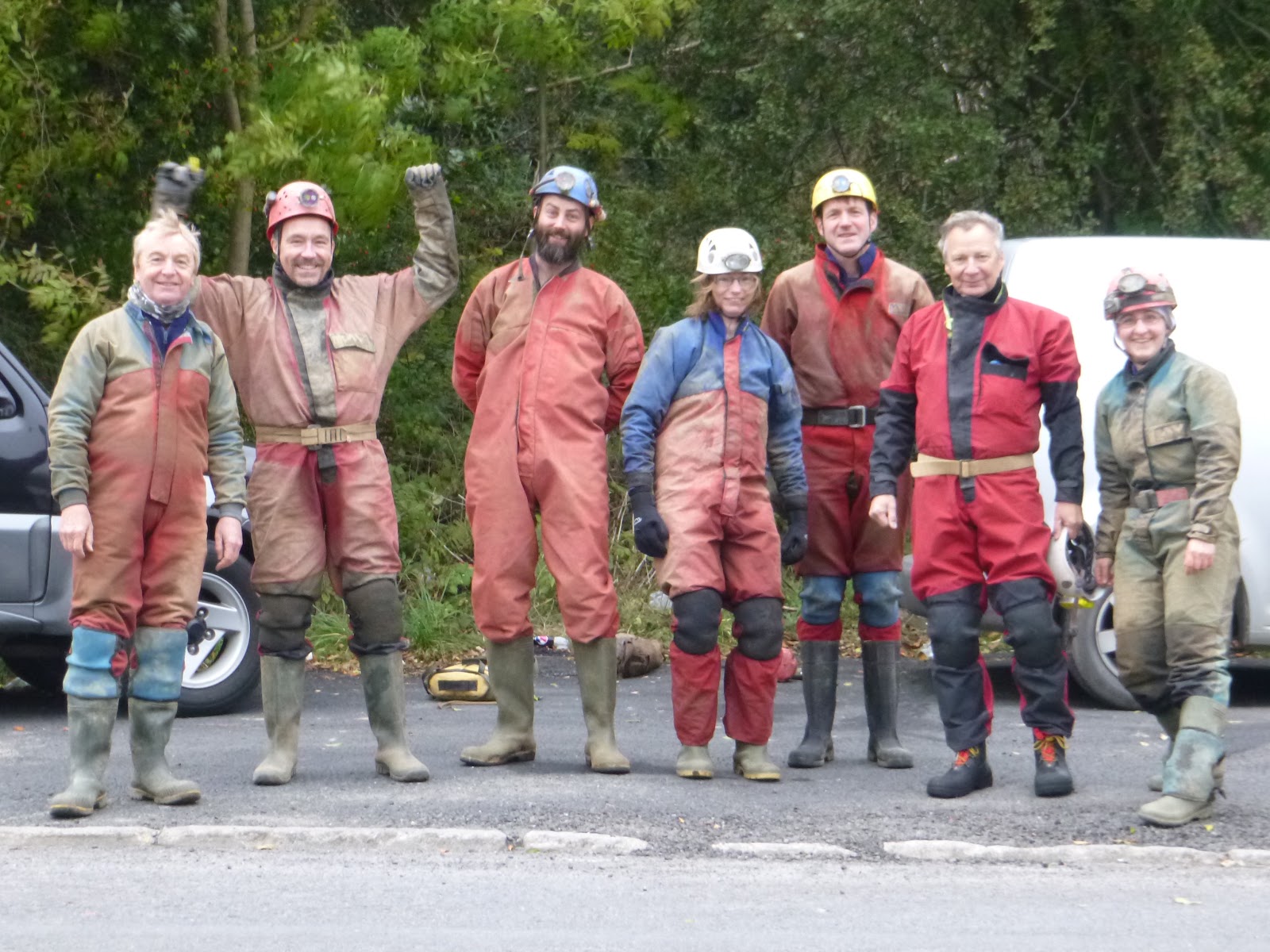 Fresh aches and pains emerged on Sunday morning for most people, so it was decided that a shorter trip was required today. Andy and Antonia fancied exploring Eglwys Faen and the rest of us thought that Craig a Ffynnon would fit the bill. We were also joined at Whitewalls by two extra club members, Phil Knight and Colin Hoare. So it would be a good strong group of 7 that would head down the hill to the cave. Chris was really excited about this - he had wanted to visit Craig a Ffynnon for many years.

Unusually, the lock opened really easily today for Duncan, and we were in the cave within minutes. It was a later start for us today, so it was around 11am by this time. We then headed in through the pretty Straw Chamber up the ladder at First Choke on to the wet crawl through Gasoline Alley and all still fairly clean and fast going at this point. Arriving at the climb up to the second boulder choke we met a party of three on their way down and then suddenly a group of 8 Cardiff students also arrived to join us. Having been in Craig a Ffynnon several times before without meeting another group, the cave was suddenly looking incredibly busy! But we all got on well and had a chat while waiting for people to ascend/descend the pitch (although Chris had a rather close encounter with a small loose rock). The pitch was a fixed ladder up to a climb of around 8m that has a rope on it for the first part and then some metal plates bolted into the wall, via ferrata style, for the second bit - these are somewhat interesting if you have short legs.

One of the places it would be preferable not to meet another group travelling in the opposite direction, would be while you are actually in the Second Choke itself which is rather tortuous and squalid. So when we met another 3 people while in this we performed some interesting acrobatics to allow people to pass each other. It was then out into the big stuff and we soon reached the gloopy mud. Fun was had by most people in this as wellies came off and legs got stuck, it was soon followed by some slipping and sliding up mud banks and laughter was echoing around the passage. Great to have such good spirits on a caving trip. Onwards we went to the really big and pretty formations. Travertine Passage looked very impressive with its magnificent formations and gour pools, but the Hall of the Mountain King was even more so and almost rendered Chris speechless. 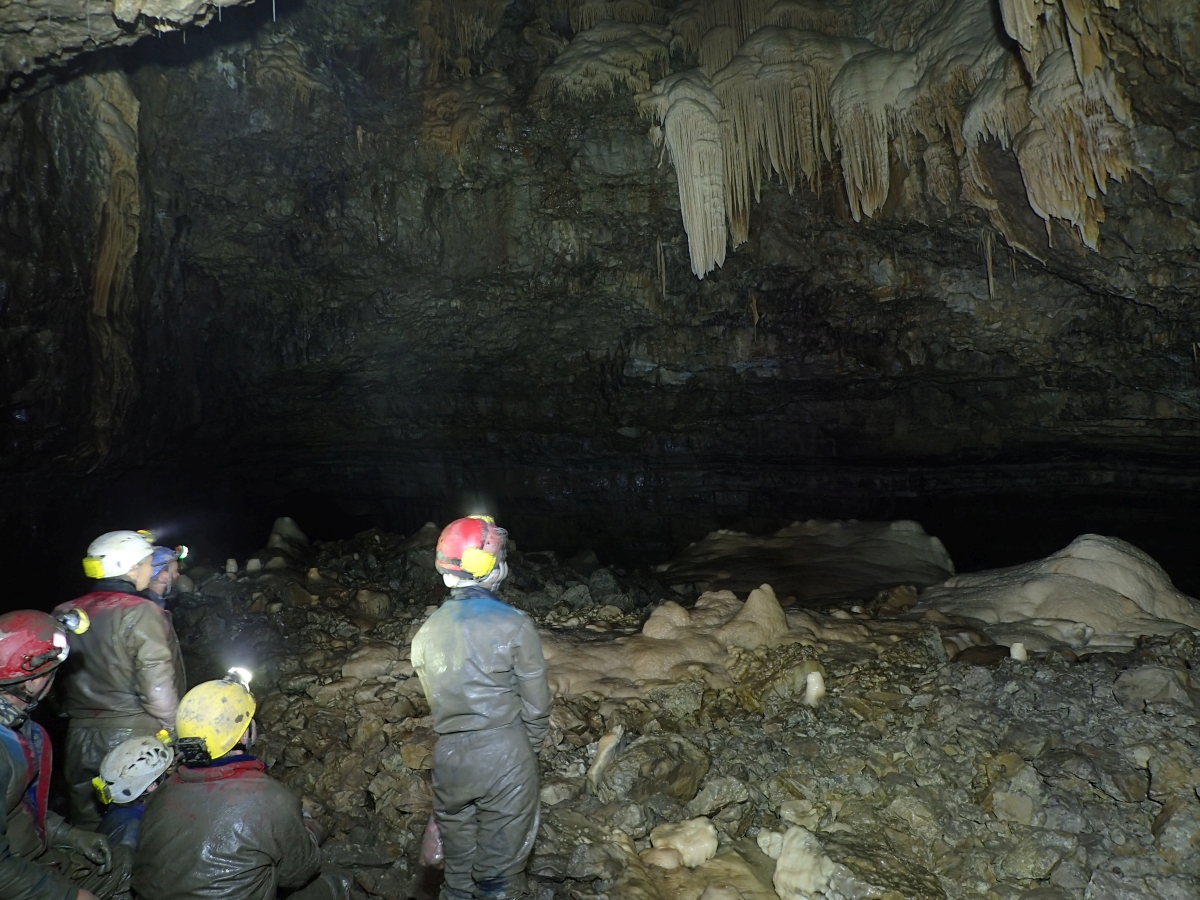 Hall of the Mountain King, Craig a Ffynnon.

After posing for some photos, we explored the area around Hall of the Mountain King and the passage on the right near the entrance to it. It was then time to turn around and head out (though we are all desperate to have a longer trip in here soon to visit the Promised Land!). We met the Cardiff group on their way into the Hall of the Mountain King, just as we were on our way out.

More entertainment was provided by the gloopy mud and the temporary loss of 5 wellies, where Claire and Tim proved absolutely useless at helping stuck cavers because they were laughing too much. The climb down from the Second Boulder Choke proved slightly more interesting on the way back down being as everyone was thoroughly covered in mud and very slippery, but there were no calamities and we all emerged out into a bright sunny day. 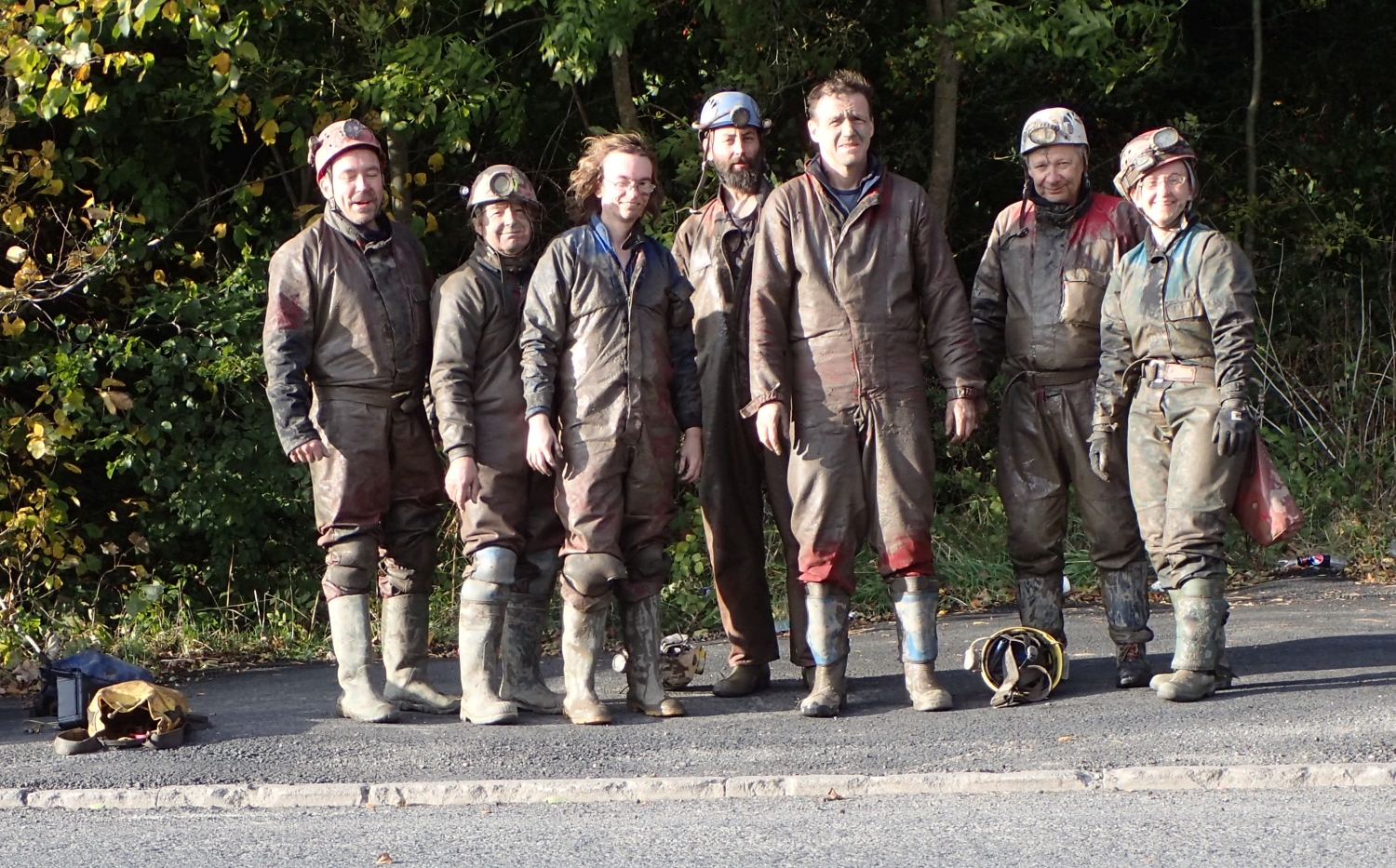 Muddy but Sunny! Colin looking not so clean!
Posted by Hornbydd