It was a grey and drizzly weekend at Penwyllt, but still some 17 provisional members made the trek to SWCC to take part in this weekend's caving exploits. All these were either brand new to caving, or experienced cavers new to the club itself. Some of these members went to extraordinary lengths to come to SWCC for the weekend and these efforts certainly deserve to be recognised here. We had Brendan Hoare who flew over from Dublin to join us, Chris Taylor who made an heroic cycle ride - carrying all his kit - from Neath Railway Station to Penwyllt in driving rain and fog and Heledd Griffiths who found herself having to take a coach back to London at 3.30am Monday morning in order to arrive at work there in time for an 8.30am start. That’s without mentioning Stewart and Taine Avey who also came and caved with us for 5 hours, despite knowing that they would have no sleep that night as they were photographing a night rally!

As well as the excellent turnout from provisional members, a whole load of fireworks went up in smoke and Piers turned 40! This was all lubricated by 3 barrels of beer supplied by what I can only assume is the mysterious beer barrel fairy…

Honestly where does the beer come from? The beer was complemented by tasty curry cooked up by Team “Annie”.

Although there were multiple provisional trips over the weekend the following are descriptions provided by Claire and Duncan.

Saturday morning Provisionals and trip leaders met in the long common room and all were introduced to each other then assigned to their respective groups based upon experience, ranging from total beginners to hardened expedition cavers.

Duncan lead a trip into Cwm Dwr, a special trip as it was Piers’ 40th birthday trip and a trip he had not done for some time. Jon and Paul, provisionals but capable cavers completed the team. Originally it was going to be a through trip but the bad weather made that impossible. We visited the Confluence, the river was up by a metre and tanking through. The approach to the confluence was a bit eerie as the sound reverberating in the passage sounded like any second a flood pulse was going to come hurtling around the corner and take us all out... 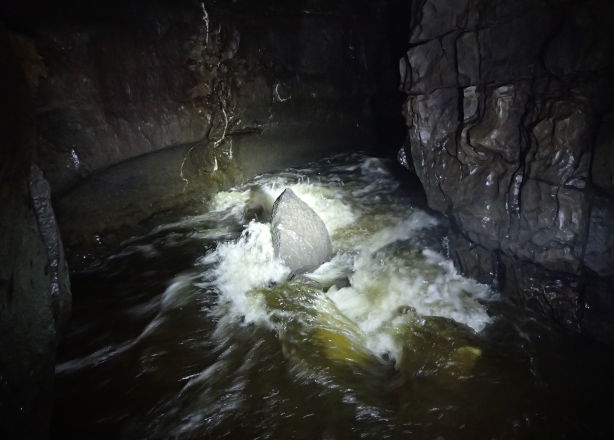 The confluence, definitely not the day to do a through trip! 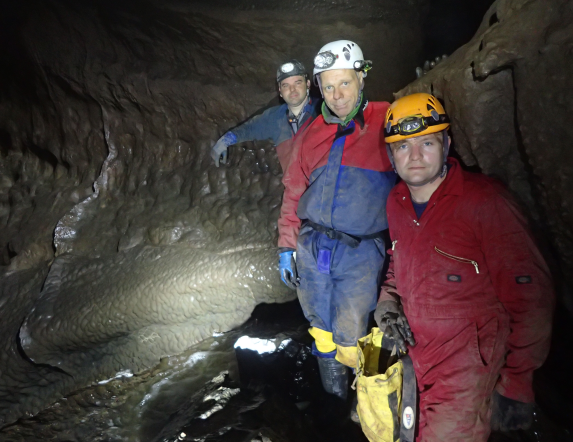 Piers, Jon and Paul just upstream of the confluence

We back tracked up to the Smithy and entered Piccadilly then down to the other end of flood by-pass. We were amazed at how much foam there was and the height it had reached. 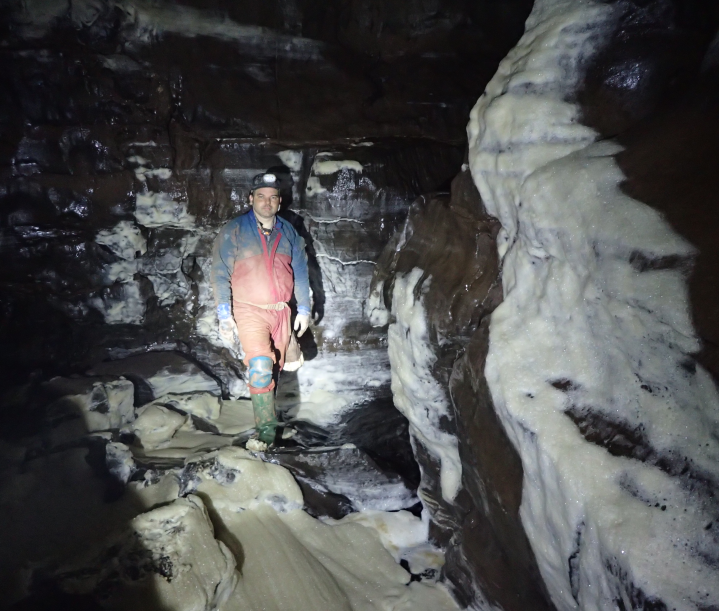 Piers at flood by-pass with foam up to 3m high on the walls.

We did a quick visit to Heol Eira and headed back out of Cwm Dwr for another knee grinding exit. 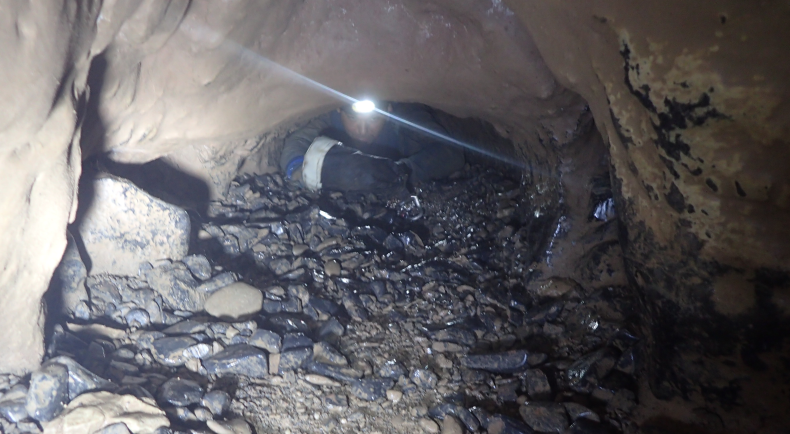 Piers now deciding he wished he had never gone on the trip!

James Hallihan decided he would like a chance to lead a group of beginner cavers in OFD2 so that he could both practice his route finding in the cave and perfect his group management skills. At only 11 years old, but already having an impressive 8 years’ worth of caving experience under his belt, James would be our youngest caver, let alone cave leader. Two more experienced cavers came along on the trip to ensure that no problems would arise, but they kept their interfering to a minimum so that James would have the full experience. He did admirably well, which was no surprise to anyone on his trip. The new cavers on the trip were Stewart and his son,Taine (12 years old) and Kate. Phil and Claire came along to make up the numbers. 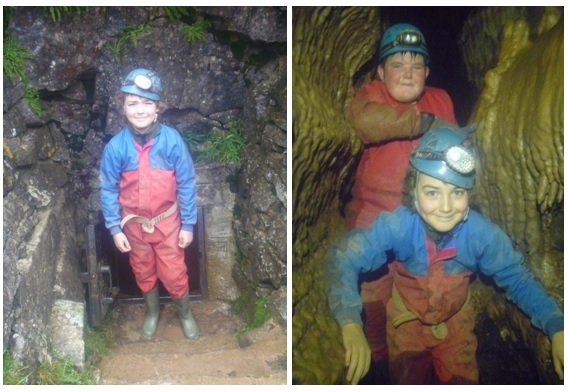 James showing the new cavers that squeezes are not to be feared.

The trip went well throughout. Taine, a budding photographer, saw plenty of places he would like to come back and photograph one day and had a great sense of adventure trying every aspect of caving involved in the day, even the traversing, which he had been fearing. We will return one day to have a go at the crawls, so that he has a fuller sense of what can be involved in caving. 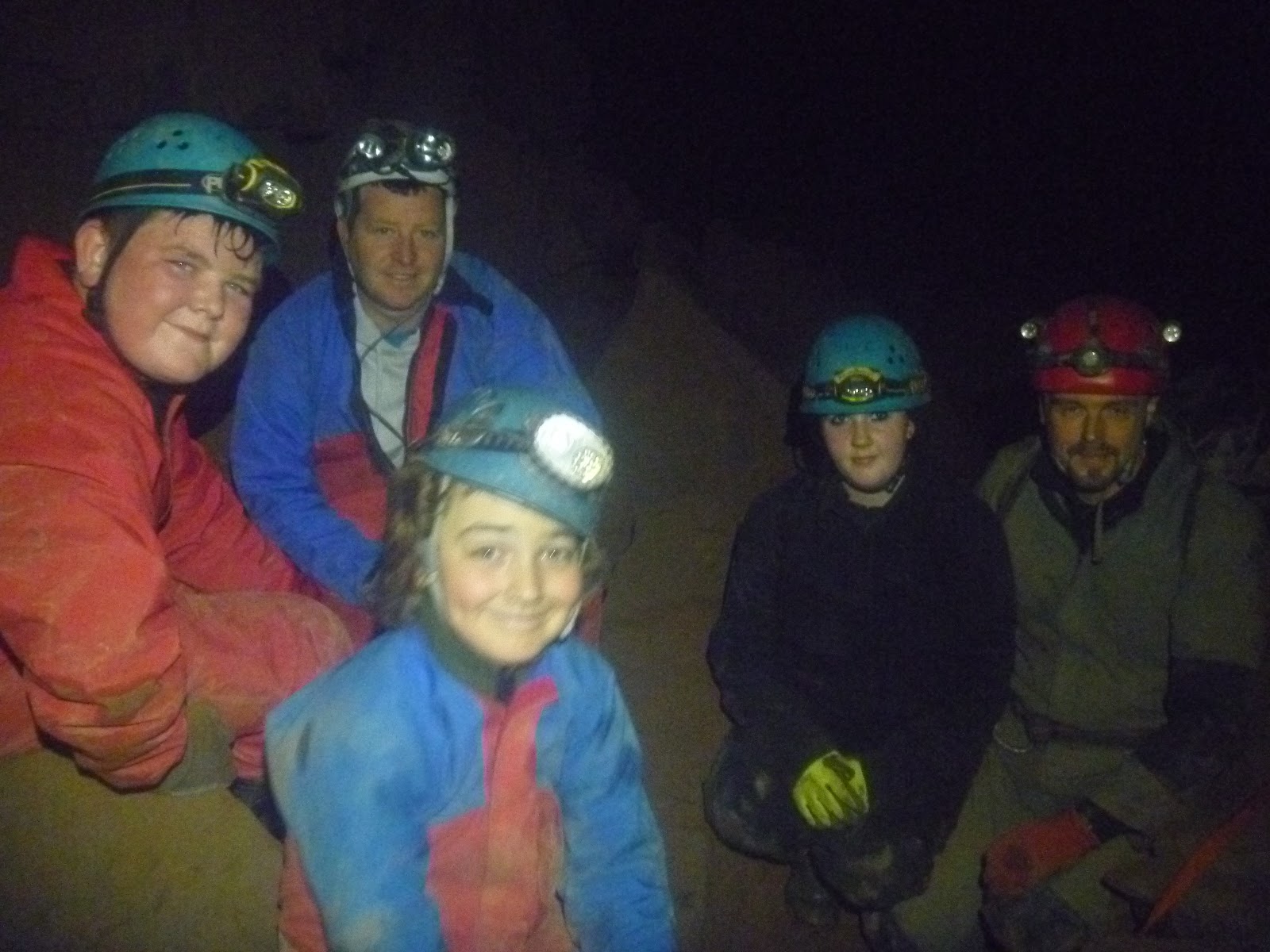 The group near the Wedding Cake 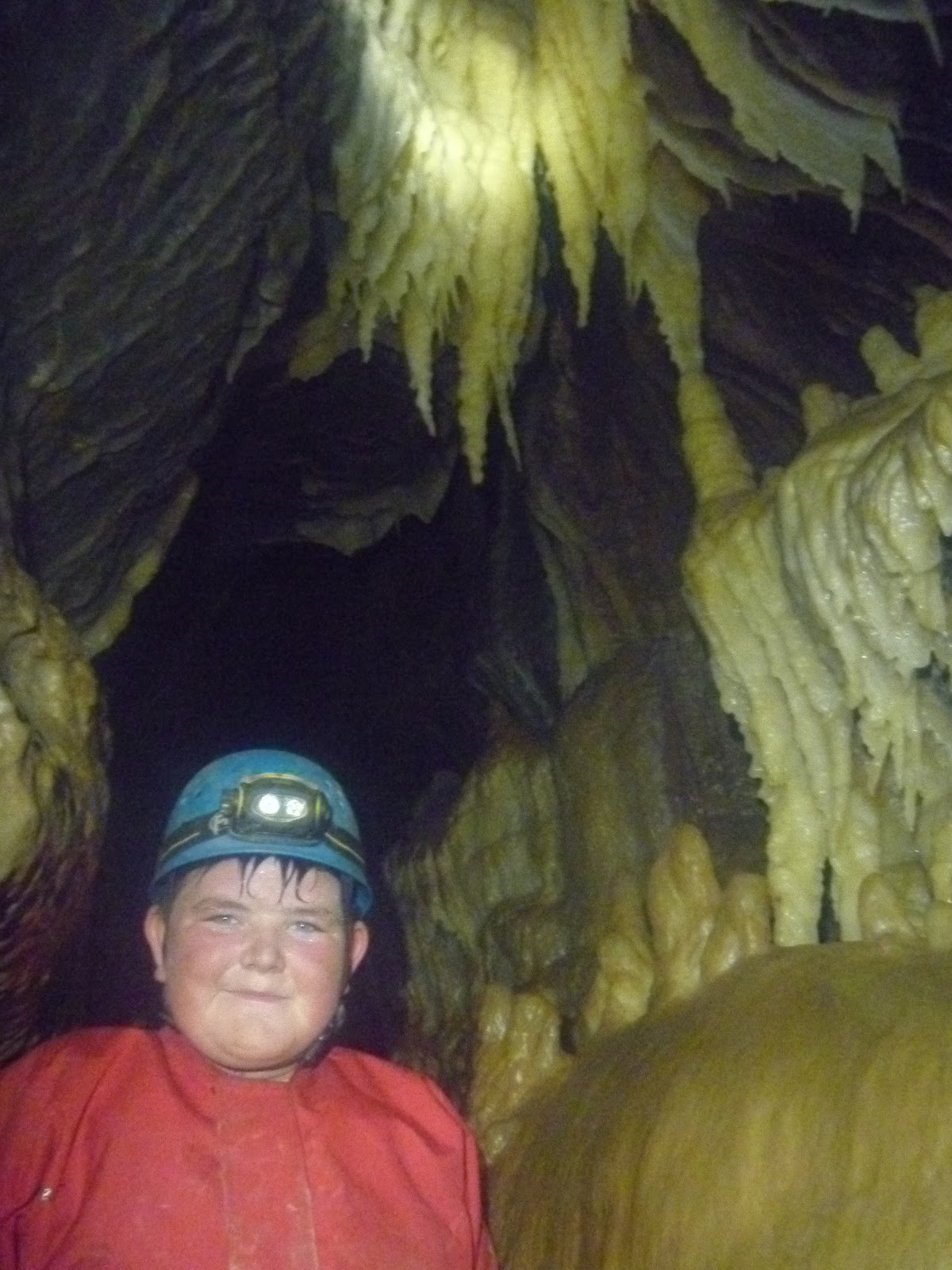 Stewart enjoyed trying to learn the route and seeing Taine have fun. Kate conquered some fears along the way and showed a vast improvement in the way she moved through the cave, gaining in confidence as the trip went on. We also met Jo White and her group using her OFD huff to navigate in the Entrance Series. You can get yours from the Publications cupboard, priced at £9 each and also available in Cwm Dwr design as well. 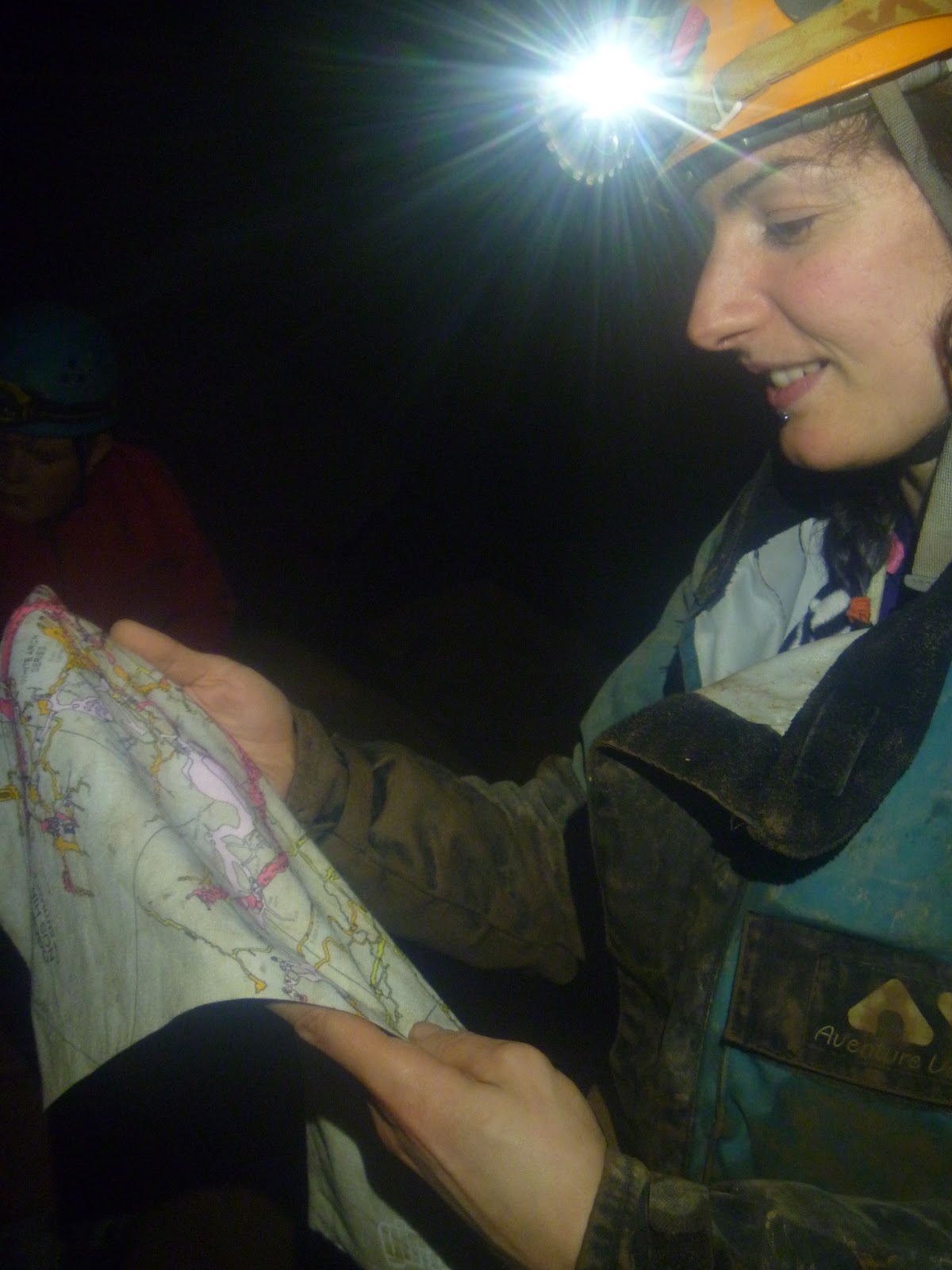 The new cavers even opted to extend their trip by a short while through tagging on a visit to the Mini Columns at the end. A total time of 5 hours was spent underground. 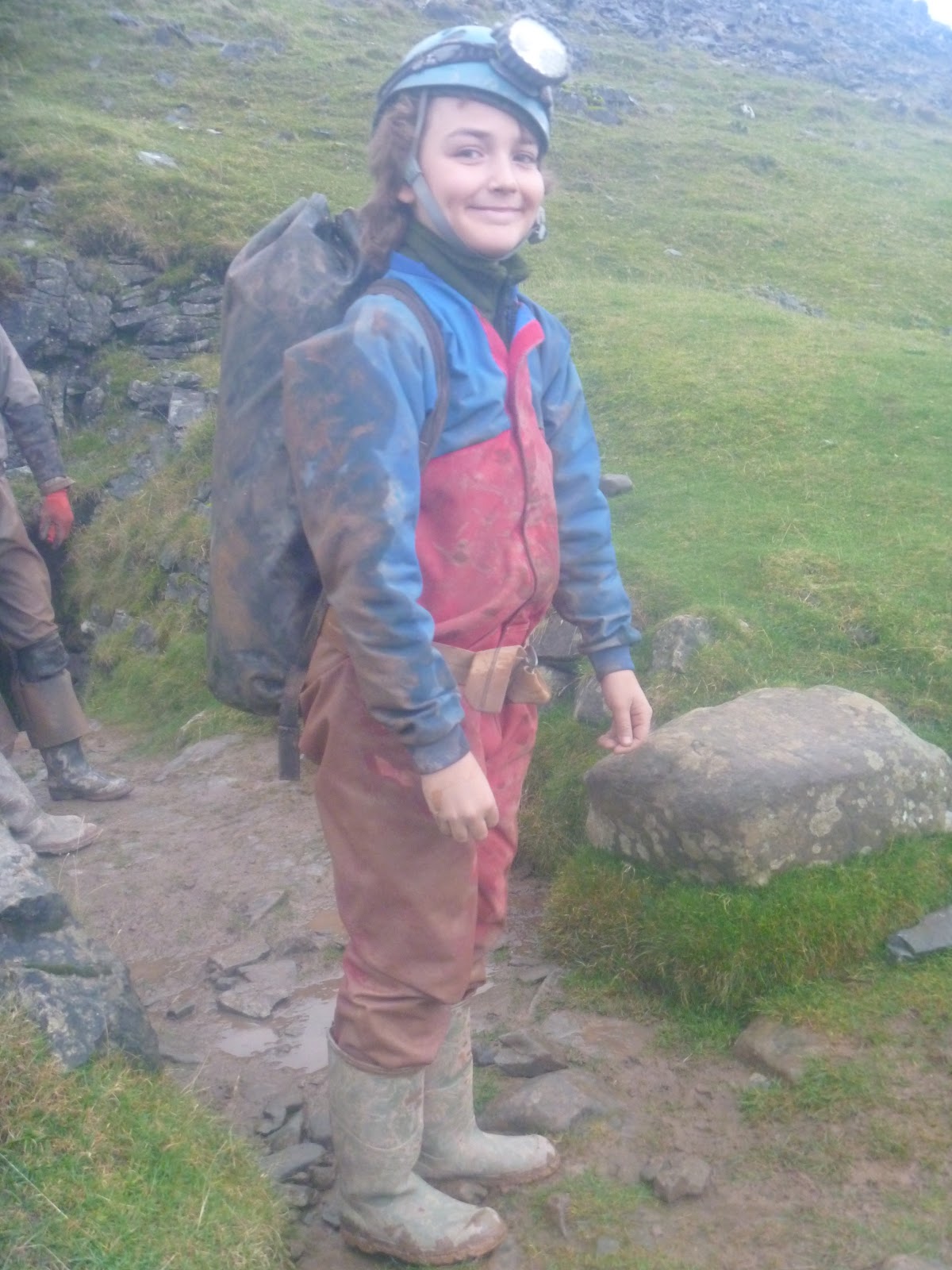 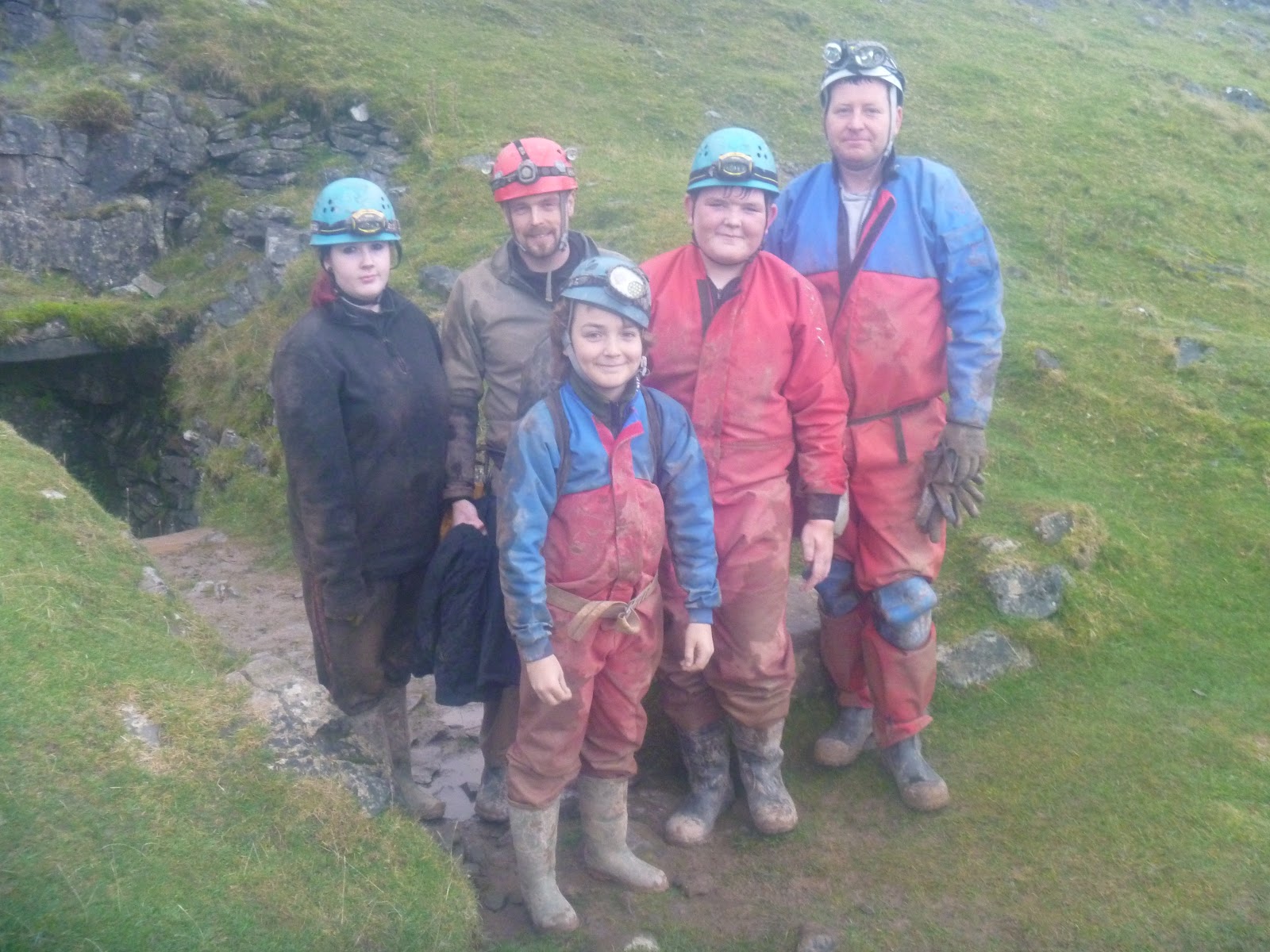 James wearing the burden of leadership and the group returning to the surface
Other trips that day were completed by Adrian and Kate, who took Andrew and Chris around OFD1; Iain took Colin, Brendan, Heledd and Rhys on a round trip in Top Entrance and Tim took Chloe, Will and Phill on a tour around OFD2.

Saturday evening went with a bang! Loads of fireworks were let off, beer was drunk and curry scoffed! Piers got an excellent Birthday cake and long room packed out as everyone sung happy birthday with the Cwm Dwr crawl a distance memory! 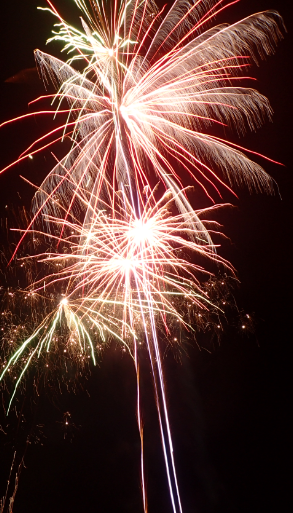 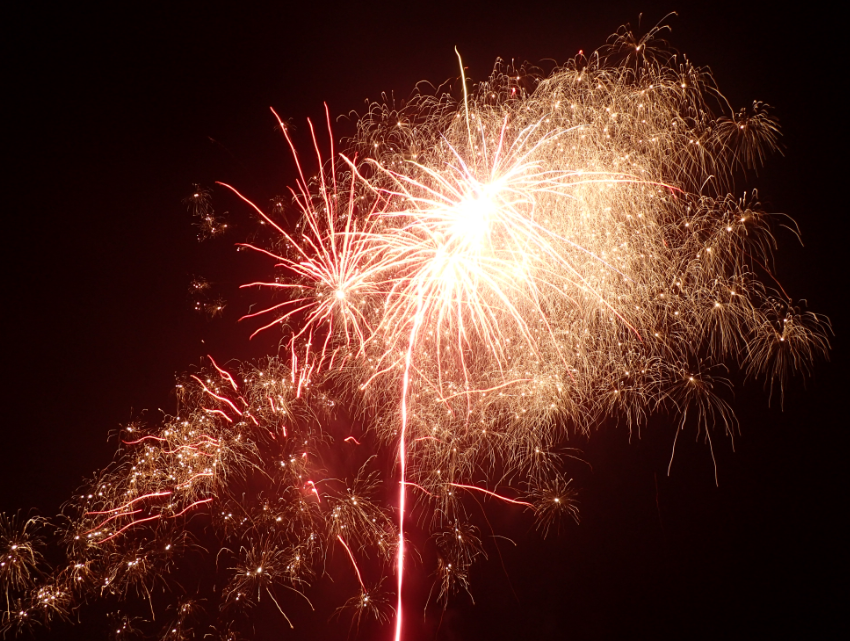 Excellent firework show and no one lost a limb...


As always the party went on late and much drinking done! 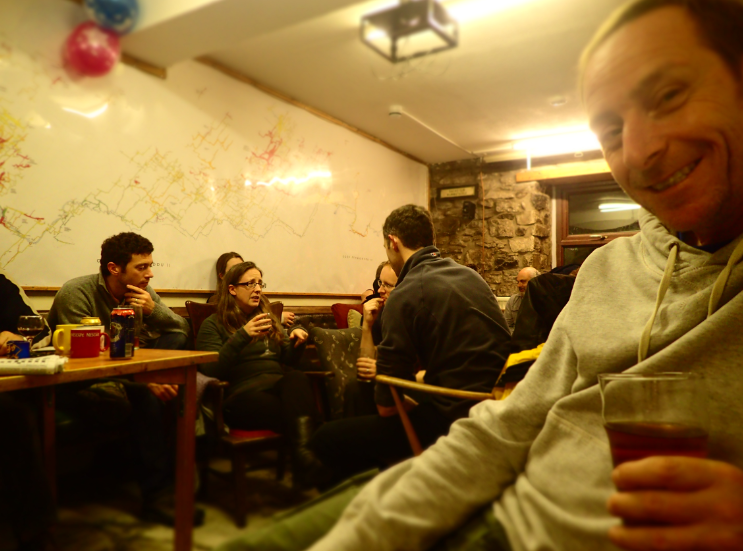 Duncan enjoyed the Cwm Dwr crawl so much that he went and did it again on Sunday. This time with provisionals Steve and Phill. Just as we were about to leave Phil Knight joined the trip. This trip was successful for two reasons; Steve learnt more of the route through Cwm Dwr and I managed with the help of the team, and advice from Mark Burkey, to visit a part of the system new to me called Tapioca which had stunning white formations.

Catrin, Vaughan and Claire took Rhys and Heledd in to OFD1 for a trip on the Escape Route, being as the river was still on the sporting side. This went well with Vaughan and Cat consolidating their knowledge of OFD1 and Rhys and Heledd enjoying the different challenges of the trip, including using cowstails for the first time.

Antonia took Colin, Brendan, Chloe and Will in to OFD1 for their first visit. Having managed to stagger the groups fairly well, both OFD1 teams only actually got to be within chatting distance on one occasion.

Damian took Andrew on a trip around Top Entrance and Chris joined Jo and her team of cavers on a trip to Speedy Caver and the Bedding Chambers. 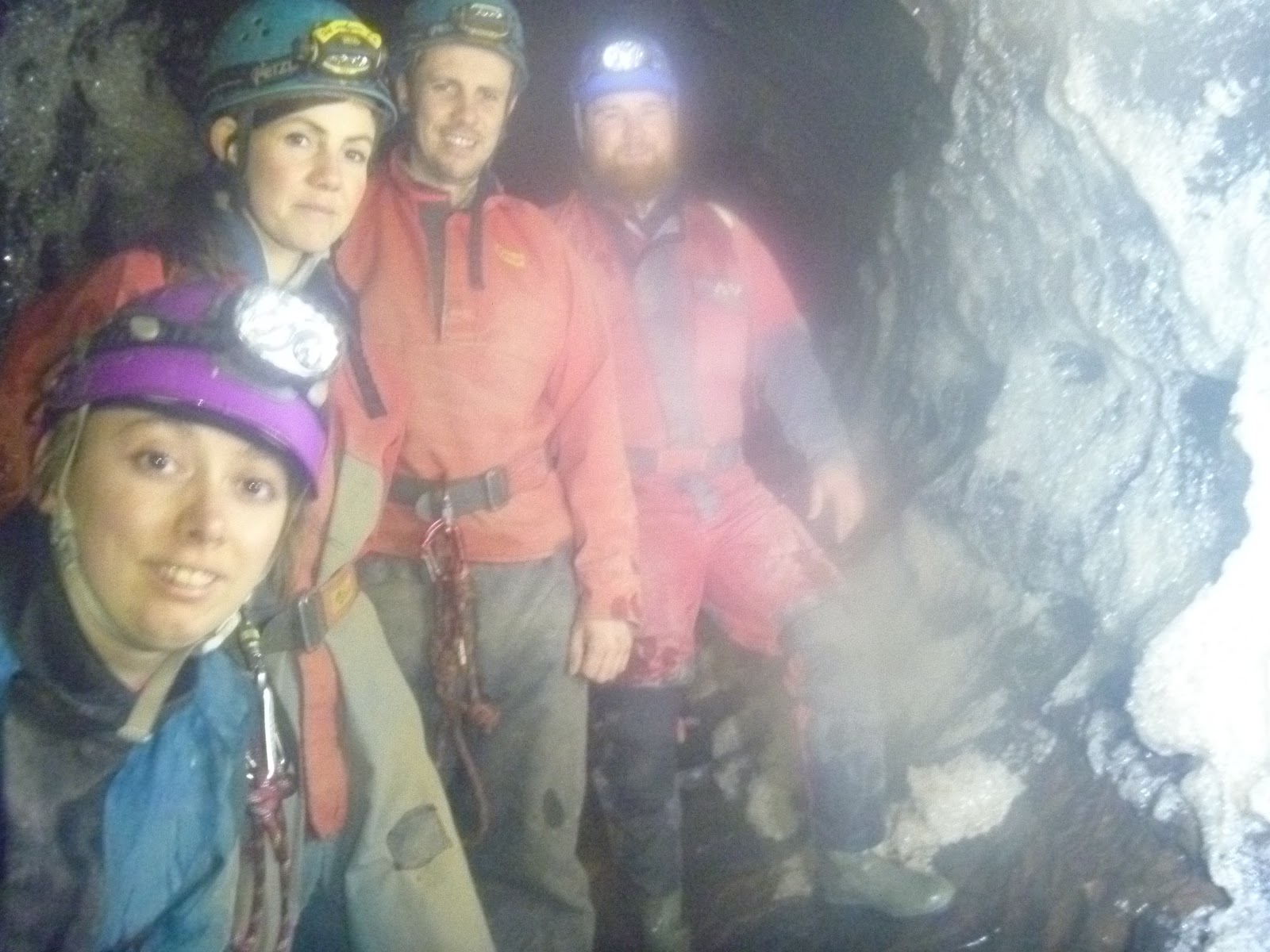 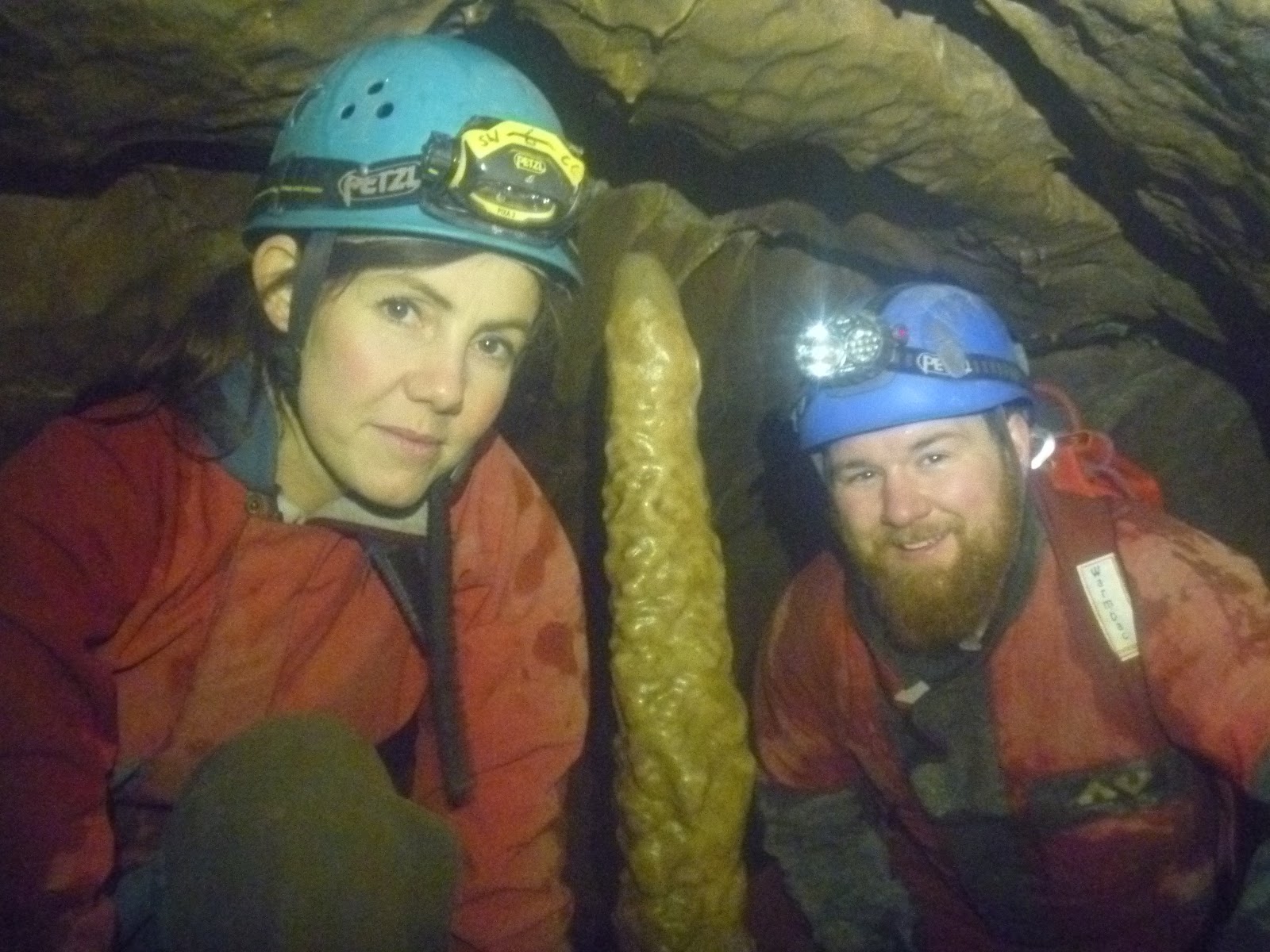 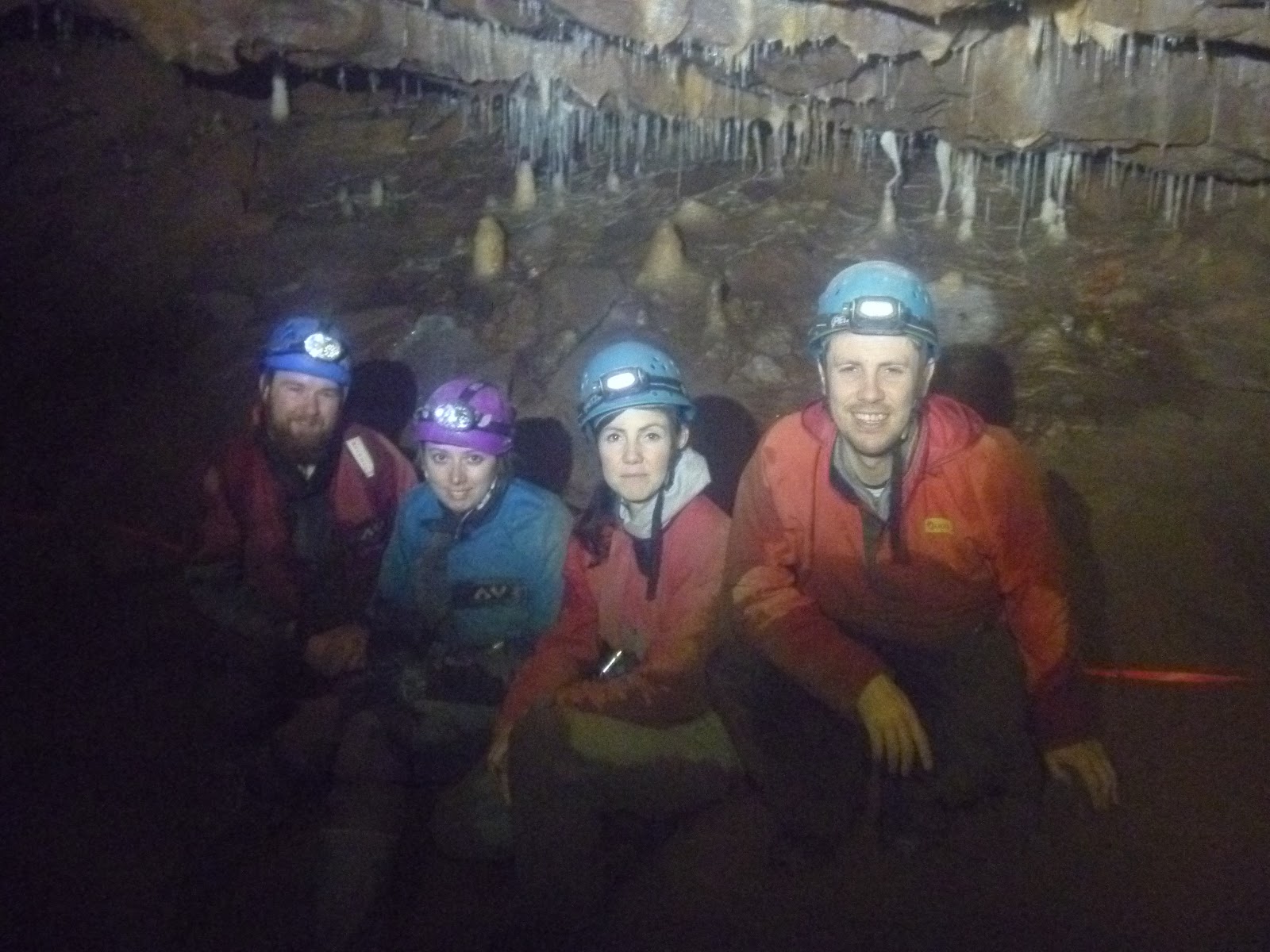 Many thanks to all who led trips on the weekend:


New provisional members to watch out for: